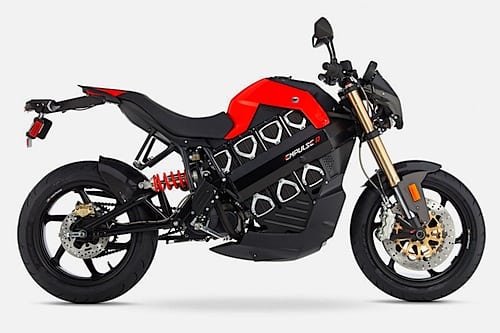 The holy grail of electric vehicles is to find a gearbox capable of handling an electric motor’s phenomenal torque.  The Brammo’s Empulse has a solution though since it’s latest models come with a gearbox for those that love shifting.  The first Brammo Empulses are being sold, test driving and feedback is finally coming in. And the verdict for this second electric motorcycle from Brammo? We’ll let you read on.

If you happened to be at the unveiling ceremony for the Empulse in 2011 in Los Angeles, you could see that Brammo doesn’t see this as just a continuation but a serious push forward for the industry.  Indeed, electric motorcycle are on the other end of the spectrum compared to an electric scooter. A who’s who of typical LA scene filled with models, hostesses, riders, racers and much more were at the Brammo unveiling.

Is an electric motorcycle only capable of being direct driver? Think again. The Brammo Empulse has a winning ticket, a gearbox that helps it go fast and far without draining it’s precious batteries too quickly. So far, when it comes to electric drive, the default is single speed transmission but the Empulse has a gearbox, meaning those who still miss shifting will be happy with it.

Check out this Jay Leno’s Garage segment with the Brammo Empulse.  He takes it for a ride!

Rejoice, the Brammo Empulse comes with Level 2 charging. Over 100 mph, 54 to 55 hp with about 70 ft Lb torque at 6,000 rpm. Full torque from start with a gear box? Yes, it’s possible. In order to reach the 100 mph/ 100 mile range, Brammo had to design its batteries from scratch, approximately. If the batteries are air-cooled, the electric motor and motor controller are liquid cooled.

Starting at $16,995, the base model can get the Federal ten percent tax rebate. The $18,995 sports a performance helped by carbon fiber. The cherry on the cake is the limited edition TTX Race bike, with the top performance available.

Leno’s test drive was impressive, mostly because of the gearbox that not only helps the Empulse climb into comfortable highway speeds, but also manages the amount of electrons reaching the motor. The gearbox does indeed help reach a range of over 100 miles in long congested traffic. I spoke to one of the engineers from the Italian company that designed the gearbox system and the research and testing that went behind was impressive. My friend Terry Hershner who drove his electric motorcycle across the country (Zero Motorcycle’s last year Zero TTXGP actual racer) also got to briefly test drive the Empulse and found his initial experience pleasant.

Another fellow in Portland has posted on ElMoto.net, an electric motorcycle forum, with a lot of information on his Empulse riding experience. After selling his eVFR, his Empulse R came in. As he says: “…rode about 40 miles on some twisties nearby my house. It was such a blast. The bike takes off when I want it to, the transmission is easy to power shift (Brian showed me how best to do that). I only really use the clutch to downshift. It was nice not having the loud hum of the exhaust right behind me. I could hear my buddy behind me in my old SV650 (He bought it).”

Brammo has spent a lot of time, energy and money on designing its second bike and it has a lot riding on its success.  Will the Brammo Empulse with a gearbox be a success?

6 thoughts on “Brammo Empulse Electric Motorcycle Gets Performance With Gearbox”