Most of the concepts we’ve showcased here in our Coffee and a Concept column have been classics.  Only rarely does a contemporary concept truly excite or interest the automotive lover for more than a fleeting moment.  With manufacturers and design houses putting out hundreds of concepts a year, most become nothing more than blips on the press radar before being forgotten.  Once in a rare while, however, we witness history as a beautiful, destined-to-be-remembered concept is shown.

The Aston Martin CC100 Speedster is one such concept.  Unveiled on May 20, 2013, the CC100 is a retro throwback with a lot of modern styling cues and that signature Aston Martin racetrack gurgle.  It’s a combination of old and new, classic and future, beauty and beastly growl that will not soon be forgotten.  Once viewed, it will leave a forever impression.

The first thing most onlookers will notice about the CC100 Speedster Concept is that it is very reminiscent of what is perhaps Aston Martin’s most famous sports car, the DBR1.  The DBR1 appeared in 1956, created for the World Sportscar Championship in the competition’s first year in which cars entered did not have to be street legal.  The DBR1 also was the first Aston Martin to feature the triangular intake vent on the side, a signature to the carmaker ever since.

In 1957, the DBR1 entered its first full year of racing and also, mid-year, received the growling 300cc, 250 hp RB6.300 Straight-6.  It took top spots in the Spa Sportscar Race (first, second), overall victory at the 1000km Nurburgring, and the victory at the Spa Grand Prix.  Many of these races featured the legendary Tony Brooks and Roy Salvadori behind the wheel.

In various chassis setups (denoted as DBR1/1, DBR1/2, DBR1/3, DBR1/4, and DBR1/5) with different powertrains and other options, the Aston Martin DBR1 raced until 1959, when it was retired in favor of the newer, larger engine base in the 3.7-liter.  Most were sold to private racers, but their race history was short and they became collectibles.

Fast forward to the new Aston Martin CC100 Speedster Concept and the company’s celebration of 100 years in business.  The concept is at once retro and futuristic. The car is a beautiful melding of style and power, using elements of the DBR1 and a modern direction that Aston Martin may be taking with future vehicles.  The one-off concept is a working model that showcases much of what the company can do when it put their minds to it.

The long, slooped hood curves upward from a wide-mouthed grille at front.  Peering, slitted headlamps run up the fenders behind a grooved cut and Aston Martin’s signature “rolling” curve to the rear third before the powerful rear fenders emerge.  The low double-hump of the cockpit, another Aston Martin favorite, comes out above that point above the rear fenders, while underneath, an unusual open cut in the cockpit replaces the usual triangular intake opening.

The CC100 is decidedly larger than its DBR1 predecessor, measuring a deceptive four and a half meters in length and two and a half meters in width.  Its massive size is hidden by the astute attention to Vertical-Horizontal aesthetics that Aston Martin is so well known for.  It appears to be a much smaller car than it is, with the girth being a requisite of the massive powertrain that moves the beast.

More Aston Martin DBR1 cues are seen in the long nose and clipped rear end with the wheelbase being decidedly rear-ward in orientation as the giant hood promises not six, but twelve cylinders of growling power.

Everything about the Aston Martin CC100 Speedster says speed.  And lots of it.

That comes to fruition with the 6.0-liter V12 engine that powers this beautiful machine.  When the CC100 debuted, it did so on the Nurburgring track alongside the winning 1959 DBR1, with the two lapping the circuit as if father and son were taking a victory run together for old time’s sake.  The naturally-aspirated V12 from AM11 is the latest-generation of their engine, mated to a six-speed hydraulically actuated automated sequential manual transmission which is controlled with steering-mounted paddle shifters.

The Aston Martin CC100 powers from zero to sixty in just over four seconds and tops out at 180 mph. The cockpit of the Aston Martin CC100 Speedster is crafted largely from carbon fiber.  The details are both austere and remarkable, utilizing the rippling effect of the carbon with black leather and brown offsets in the trim.  The center console consists of both retro flip-switches and modern push buttons and a large, central dial atop it all.

The focus of the CC100 is very obviously on the drive, not the accouterments, and that is well-illustrated by the beautifully blank interior of the Speedster. 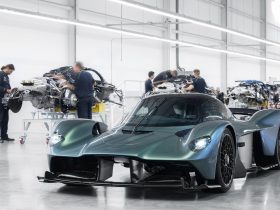