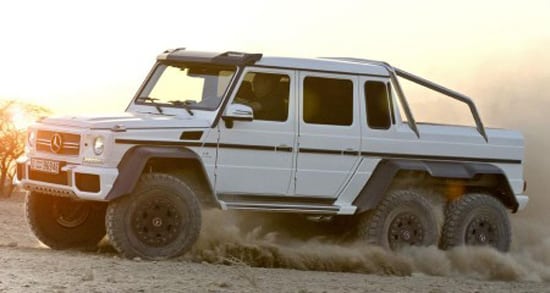 For most offroad fans, the Ford F150 Raptor SVT is the king of all offroad stock trucks. However, there is a new truck in Australia that is laying claim to the title. Raptor meet the Mercedes-Benz G 63 AMG 6×6. Also known as the new king of stock offroad trucks. Sorry Raptor your time is up.

The Mercedes-Benz G 63 AMG 6×6 is a special version of a six-wheeled G-Wagon that was initially developed for the Australian army, according to the Australian The Motor Report website. It is easy to see why with an amazing twin-turbo 5.5L v8 engine that delivers 536 HP and 560 ft-lb of torque. This is coupled with a 7G tronic seven-speed automatic transmission that has two different reverse speeds. The unique transmission powers the six-wheeled compact crew-cab pickup up and down mountains, sand dunes and the open road. It is the go anywhere in comfort SUV.

Getting in and out of places is no problem with a ground clearance of 18 inches. Yes a foot and a half! It also has a 52-degree approach and 54-degree departure angle with its 37-inch tires.

On the military model, the truck has an all-wheel drive system with five differential locks that can lock all six tires if needed. Pretty much, it will get out of anything you can think to get stuck in.

Don’t think this truck isn’t as fast as the Raptor. It is faster, with 0-60 in just under 6 seconds. The Raptor does it in 6.9 seconds.

It does remain to be seen if it will be as popular as the Raptor. Mercedes-Benz is planning a limited production run of these vehicles.

As of this time, an MSRP hasn’t been listed. The Motor Report suggests it could be as high as $1 million. That is a heck of a lot higher than the Raptor which starts at around $45k.

What do you think? Drool worthy or absurd?

One thought on “Mercedes-Benz G 63 AMG Offroad Machine – Better than a Raptor?”