As automotive enthusiasts and journalists, we drive a lot of vehicles.  From classics to the hottest new supercar, we drive anything and everything we can get our hands on.  Because we love automobiles so much, we often troll car shows, automotive events, get invited to demonstrations and unveilings, and more.  Talking about this with one another, the Car News Cafe crew realized that we all have our own all-time favorite vehicles.  These are vehicles we’ve either driven as once-in-a-lifetime opportunities or cars that we’ve owned.

Here, then, are the top three most memorable cars each of us has driven.

The Tesla Roadster is still my point of reference when it comes to electric vehicles. Gentle and zen-like in traffic but ready to pounce if a slot opens up in the next lane. I was surprised to see an electric car could do that much back in 2007. 240 miles is achievable if you have a feather foot, but step on it and darn it, that rush of electrons will send a shoot of adrenaline down your spine!  This car is as close as it gets to the thrill of a roller-coaster ride. It is probably still my favorite EV, with the Commuter Car Tango. Call me odd-ball!

Hum, how do I wrap my head around this one and convey the exhilarating experience of flooring the powerful Alfa Romeo/Maserati reworked V8 on small Napa Valley roads? OK, so it’s not a Green Performance car, but it is highly impressive. The car is the perfect in between Ferrari and Maserati. If you feel your Maserati is too much comfort and a missing a little on the grunt and personality, the 8C does that. And if you feel your Ferrari is too much attitude and performance, minus creature comfort, the 8C does that. The Alfa Romeo 8C Competizione is equally at ease cruising Sunset Boulevard or carving canyon roads.

Again, not a Green Performance car but you need to drive one to see that these cars are track car with a DOT tag.  Also, you’ll have to go see your chiropractor before stepping in and stepping out the race inspired Noble.  There is a roll cage, which makes getting in and out a race car practice.  The Noble is what an early Lotus on steroids should be. Pure driving, pure emotion, pure fun! I was lucky enough to see a police officer on the road next to me to remind me I was traveling on public roads. This is boy toy fun car and at that price, my, what bang for your buck.

I haven’t driven quite as many cool cars as my CarNewsCafe colleagues but I have ahad a few drives that were quite memorable.

The Alfa Romeo Spider that I drove was actually owned by Nicolas.  Driving any convertible in Southern California on the beach is quite a fun experience.  (That’s because of there are lots of girls in bikinis, which must be the number 1 cause of accidents in beach areas and towns.)  Driving an Alfa Romeo and getting a taste of Italian flare and passion, I was hooked!  I’ll be honest Alfa Romeos are not the best driving cars around, nor are they the most reliable, but man I had a LOT of fun in Nic’s Spider.  I see why the hosts of Top Gear say, “You are not truly a petrolhead until you have owned an Alfa.”  They are great cars with a impeccable design and whether they are practical it doesn’t matter, you want to own an Alfa Romeo… just to drive.

We included the Alfa Romeo Spider in our “10 Cars that WILL get you Laid” list by the way. One of the advantages to working as an auto tech is you get to drive some pretty cool cars once in awhile.  Fortunately for me a Subaru WRX STI rolled into the shop I was working at a few years ago.  This Subaru was fast and the handling was tight.  Driving it around the city I was getting it up to 60-70 mph in 30mph zones without even thinking about it!  I twas totally crazy car and I loved every second I was driving it.  (However the car did smell bad, so I drove with the windows open.)  Taking it on the highway I hit 130 mph without breaking a sweat.  The boxer engine and legendary Subaru AWD handling help you see why Subie’s are used for Rally racing.  At least for one day I could pretend that I had the driving skills to be a professional Rally driver with the Subaru WRX STI. 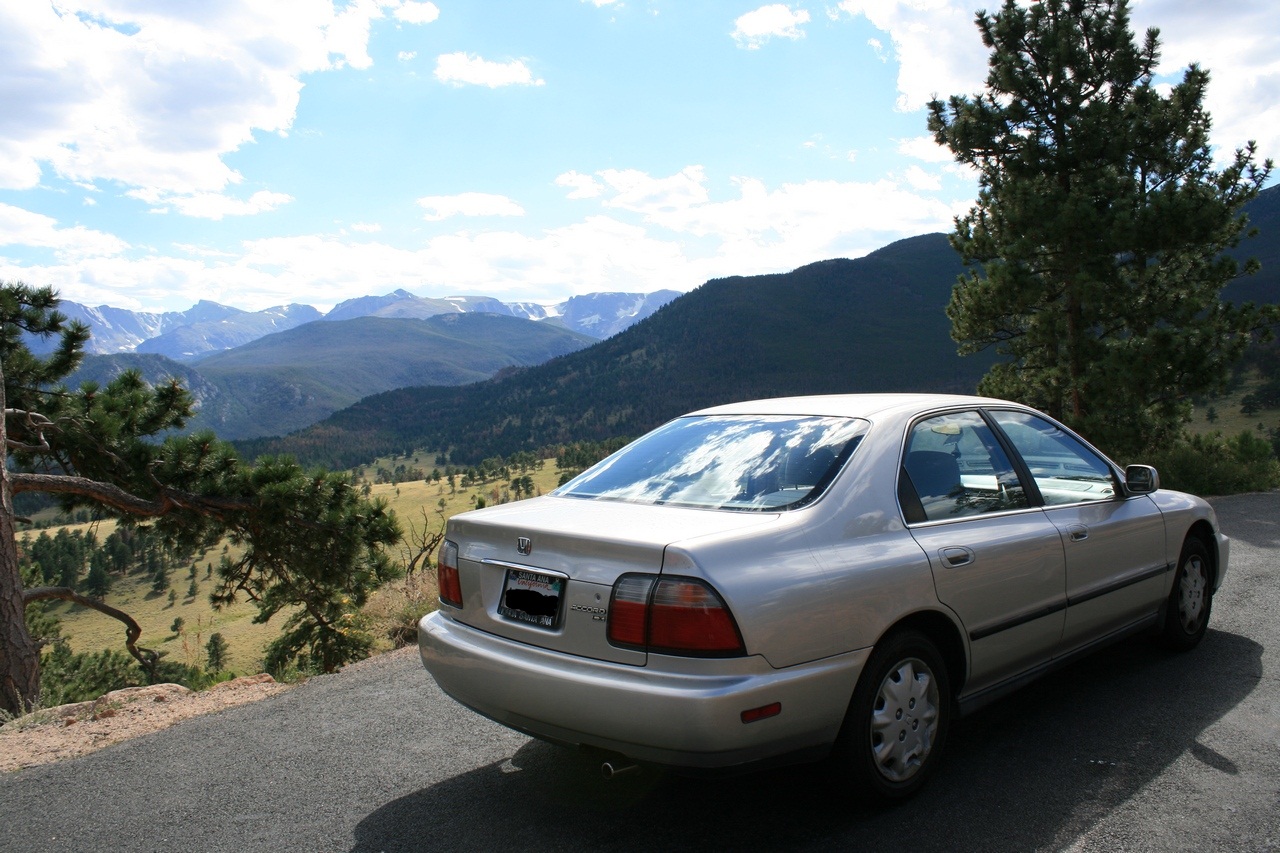 Honda Accord’s are not really the greatest handling cars in the world, but hell, they will get you there and back without a problem.  I drove my ’96 Honda Accord across the country and it didn’t give me any trouble.  All I ddi was check the tire pressure and fill it with oil once and it ran like a champ for 3,000+ miles.

The above picture is when I visited the Rocky Mountain National Park in Colorado.  For a car that was 16 years old (at the time) it handled going up the mountain better than I expected.

In addition I’ve done a lot of repair jobs on my Honda Accord and it is just an easy car to work on fix yourself.  I would list all the DIY auto repair jobs, but it would probably take me too long.  A lot of cars that I like, honestly are a PIA to fix.

You can’t find a better daily driver than a Honda Accord and sometimes that is all you need and all you want in a car.  I dare you to find a better sedan.

This was a very tough choice for me as I’ve had the opportunity to drive some very awesome vehicles in my life.  Narrowing the list to three was not easy.  So I decided to go with something old, something unusual, and something I recently drove. Back when I was a teenager working at an auto wrecking yard in Utah, I had a 1984 Toyota Corolla as my everyday driver. While working one day, I happened to go to the front office of the shop to drop off some parts I’d pulled for a mechanic and overheard someone asking what he could get for his 1973 Harvester, which he said had no rust and ran great but had some kind of fuel delivery problem that limited its range. He needed to sell it quick, but the yard owner said there wasn’t much call for parts off a Travelall (everyone who restores seems to want the much smaller Scout). So he could only give him crush value. The guy didn’t want his truck crushed, but couldn’t take it with him on a move.  I asked what he wanted, balked at the price (I was perpetually poor) and he wound up giving it to me if I promised not to crush it.  Probably the most fun I’ve ever had in a truck, it was a true off road machine and towing powerhouse. Sure, it only got 8 mpg and had a top speed of just 72 mph, but that Travelall was more than just a goat, it was a people-moving, stuff hauling, towing and offroad fun box of giant proportions.  I eventually solved the fuel problem by replacing the 35 gallon fuel tank, but just couldn’t afford to keep wrenching on the machine and had to sell it. If you don’t know what this is, it’s a full-sized Freghtliner Classic day cab semi-truck that runs on electric motors and hydrogen fuel cells.  Made by Vision Motors in California, several copies of this ply the ports of the greater LA area.  It’s likely the most powerful street-legal machine ever built and puts out more torque and towing umph than anything you can imagine. What’s more, it’s easy to drive because it doesn’t have the usual 10-18 gears and slow grunt into movement that a regular diesel rig does.  Awesome. This is the most recent of the vehicles on my list in terms of when I drove it.  I met a neighbor here in town at the local classic car show during the town’s annual parade. He was showing off his completely original 1965 Dart GT Convertible.  After we’d talked about the car and life in general for a while, I asked if he’d let me take a ride and get some scenic photos of the car.  He didn’t just let me ride in it, he let me drive it.  This may not be the most collectible car on the road, but it sure is a dandy.

Machines of the 1950s and 60s have a life of their own, little quirks and idiosyncrasies that make them unique unto themselves. In this beauty, it was the shifting, which was noisy because of age, but gearing itself was smooth.  Like most cars of the era, it has a sweet spot for cruising too, which in this Dart was about 60-63 mph.  In my dad’s 1961 Bel Air, it was closer to 70 mph, but whatever the car, if it was built in this time frame, it will have a speed at which it begins to float comfortably in a balance between engine noise, road feel, and ambient noise level.  In a convertible like the ’65 Dart, this means you can carry a conversation within the car (top down) keep an even feather on the throttle, and otherwise have no cares in the world as the car just sort of does its own thing down the highway.