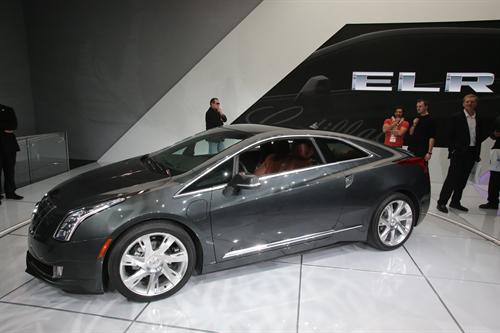 We know the Volt, love it or not, and now its elegant cousin is coming in with an eye raising move.  Priced at just shy of $76,000, can GM pull it off, or is it too early, too soon?

It’s not too complicated to see GM is aiming for the sky here.  It probably feels it needs to regain ground on Toyota. Still one has to ask, is the ELR worth this premium or is it a bit out of its price segment’s market?  Sure GM products have greatly improved, and we can no longer compare them to the frightful 80s and 90s shoddy quality and so-so handling.  However, at close to an $80k Cadillac, when the company is barely breathing again, is seen as a little stretch according to the press and comments.

When Consumer Reports, (CR) says something, people listen, and this can prove to be a tough situation to handle through marketing and PR.  So with news of CR finding the Cadillac ELR overpriced, could this set the mighty GM marketing arm into action on the defensive?  Although technically very similar to the Volt, with even less electric-only range, the ELR will show grace and poise with its design both inside and outside, but all of this comes in at twice the price of a Volt.  It sports a 1.4-liter gasoline engine and the 16.5 kW/hr lithium-ion battery pack, the total output is 207 horsepower, with 295 pound-feet of torque.  This makes the ELR heavier  than the 149 HP Volt.

The ELR will feature what Cadillac calls its “Regen on Demand”.  This variable brake regenerative system is controlled via steering wheel paddles and includes four modes:  Tour, Sport, Mountain, and Hold.  Maybe this is where Cadillac could do most of its PR work, by highlighting the amount of features offered so that drivers can prioritize.  For instance, the ELR’s driving can be tweaked from gasoline to electric power only.  All of this comes at a price and that is price is range.  The ELR’s electric range falls to 35 miles, while the company claims a total driving range “in excess” of 300 miles, compared to 38 for the Volt.  A depleted battery pack will take around 4.5 hours with a 240-Volt Level 2 charging station.  As far as the EPA, its estimates have not yet been released at this moment.

It’s a Cadillac, so the ELR comes with more equipment than the Chevrolet version.  Cadillac decided to include its CUE infotainment system in an 8-inch capacitive touchscreen, as well as a host of electronic safety systems.

Can Cadillac Commend The Big Bucks Yet?

It’s funny to think a few decades ago Cadillac was the standard, at least in North America.  The big, floating powerful cruisers were lavished with creature comforts designed to make you forget the interminable stretch of miles lying in front of the horizon.  The 1980s weren’t tender with many car makers.  In fact, what plagues many’s image today is the remnants of its 1980s quality past.  Cadillac didn’t escape this.

When the Volt came out, the possibilities seemed endless.  A coupe, a convertible and why not, a Cadillac.  But here it is, and this is happening all so fast.  We don’t know yet if GM’s bruised image is sufficiently patched in the media’s mind to ask potential drivers to fork over commend $76,000.  To be honest with GM, the quality has undeniably gone up.  Case in point is the latest Volt generation with receives much welcome updates, such as improved handling, much better interior finish quality and better overall cabin feel and fit.  The same can be said about the equally tantalizing Corvette Stingray.  The interior felt it could finally compete in an otherwise very tight market.

While both of these cars are still somewhat fresh in the public’s eye, quality issue image will completely vanish as time goes by, and enough people drive GM’s modern cars.  As we conclude our 2014 Volt test drive, we can say that GM is on the right track with quality built and has already addressed a lot of its previous problems.  Still, all of this comes in quickly in a few years, but is the public ready to receive a Cadillac based on a Volt, with less performance, more amenities, for twice as much as $76,000?