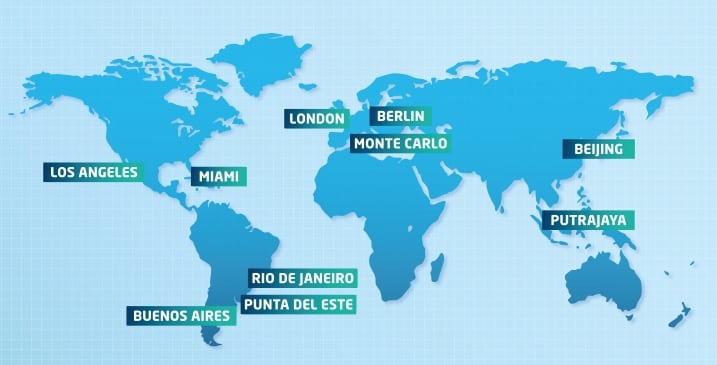 The FIA Formula E Championship all-electric Formula One-style racing will be held across four continents in ten cities on its newly-confirmed calendar. It begins a week earlier than previously announced, with the first race being held in Beijing, China on September 13, 2014 and the last race happening in London, England on June 27, 2015. The race card has become filled now with several contenders joining in. This year, of course, the cars will be uniform for the race, all being built on a Renault-Spark collaboration, but next year the E series plans to open up design and individualization to automakers and shops in a way similar to how Formula One in FIA is handled.

Rounds begin in Asia at Beijing, then go to Putrajaya in Malaysia on October 18, then across the globe to Rio de Janeiro, Brazil which replaces Hong Kong which was canceled as a venue for this season. South America hosts more races, with teams leaving Brazil and heading for Este, Uruguay on December 13 and then bringing in the New Year in Buenos Aires, Argentina on January 10, 2015.

Rounds six and seven come to North America with one on each American coast, starting in Los Angeles, California on February 14, 2015 and then going to Miami, Florida on March 14, 2015. From there, racers go to Monaco and into Monte Carlo for May 9, then Berlin, Germany on May 30, and the finishes the championship circuit in London, England on June 27, 2015.

Alejandro Agag, CEO of Formula E Holdings, said: “It’s a great feeling to be able to confirm our calendar for the inaugural Formula E season and we’re very thankful to all the cities, and candidate cities, for showing their commitment to sustainable mobility. The level of interest we have received from cities all over the globe has been overwhelming and choosing the final 10 has been a challenging and meticulous process. We’re confident our final 10 cities will provide an array of fantastic backdrops to showcase electric cars in their favoured urban environments, as well as allow us to put on a great spectacle for the fans.”

All Formula E events will feature a free practice session, qualifying session, one-hour race and live music concert taking place in a single day (Saturday) in order to minimize disruption to the city and its surrounding areas. Precise circuit layouts for each venue will be revealed at a later stage but all will use city-center locations. Tickets for the first rounds will go on sale in 2014.