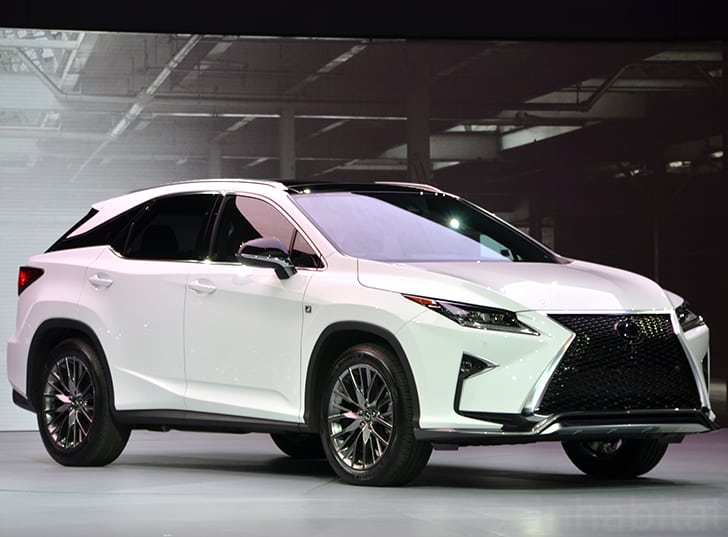 In a luxury vehicle, most of the attention is on the interior, which is what sets apart a luxury vehicle from an everyday one. With the 2014 Lexus RX 350 F-Sport, however, a beautiful interior is not all it has going for it. The MSRPs listed above are just for the 2014 RX 350 F-Sport. Other models of this Lexus begin at around the $40,500 mark. Updates over the 2013 model year are few, centering mostly on user friendliness, with a new 115-volt power outlet added in the back seating area, an update to the collision warning system to allow for faster brake application, and the addition of the Siri Eyes Free Feature for iPhone users.

Otherwise, the 2014 Lexus RX 350 F-Sport, part of the breed of Lexus RX crossovers which began the luxury car-based SUV segment about fifteen years ago, are identical to their 2013 predecessors. This is not to knock the RX 350, of course, which had little that needed changing anyway.

The RX 350 line is known for its low cost of ownership, good cargo and adverse road conditions capability, and beautifully appointed interior. For us, the only problems to be found with the Lexus are common to most Toyota crossovers – the clunky infotainment and goofy exterior ergonomics. As stated earlier, the interior of a luxury vehicle is where most of the focus should lie. In this Lexus, the interior is immaculate and phenomenally well appointed for the price point. Yes, there are better-looking or more refined interiors, but you’ll pay far more than $45k or so to get them.

The interior of the 2014 RX 350 is very comfortable and comforting, two things everyone wants in a crossover of this caliber. The use of high-end leather, smart felt-like lining for pillars and ceiling, and the integration of intelligent space usage are all expectations Lexus has fulfilled. Small details like pop-out cup holders, opening side door panel slots for easier access, and the beautiful mouse-like control for what is otherwise an outdated, clunky infotainment system are all key points here. Seat heating and cooling is not only perfectly tuned, but happens quickly when activated. The position of controls and the small details that make driving less stressful are well-considered too. Details like the side mirrors turning down slightly when backing up (making it easier to see the lines in a parking stall), the seat pushing back when you shut off the engine to allow easier entry/exit, and a shifter that requires no long reach to utilize are all nice touches here.  All five seating positions are comfortable and give a smooth riding position on the road.

The fact that Lexus combines this interior refinement with rugged capability is a point worth emphasizing. That it does so with a decidedly sporty feel in the F-Sport is even more eye-catching.

The engine powering the 2014 RX 350 is a 3.5-liter V6 producing 270 horsepower and 248 lb-ft of torque. A six-speed automatic is standard in the RX 350 while the F-Sport upgrades that to a more sporty eight-speed with standard all-wheel drive (AWD is an option otherwise).

This combination in the F-Sport means a slightly speedier feel, although the 0-60 mph ratings are the same for either. This is largely due to the faster and more frequent shifting of the larger transmission and the throatier sound its V6 gives because of that. Fuel economy in the F-Sport is also slightly better than the other models, rising to 18/26 city/highway (versus 18/25). The Lexus RX 350 F-Sport is very comfortable as a daily driver and moves about smoothly and with confidence. Unless the throttle is pressed, it makes little or no engine noise at all, with feedback through the sport-edition pedals being enough to let the driver know what the powertrain is up to. When pressed, however, the six-cylinder growls out a satisfying low pitched acceleration that rumbles through the cabin with confidence.

Speed times vary by test outlet, but our freeway onramp testing (quarter mile freeway onramp, starting from zero with idle revs, slight incline and one curve) returned repeated 87 mph averages for the merge. This makes the Lexus RX 350 F-Sport fast enough to accelerate to freeway speeds easily and to hurry around obstacles and other vehicles without delay.

Once on the freeway, the 2014 Lexus RX 350 F-Sport is smooth, requires little input to do its job, and absorbs the bumps and wobbles of the road with finesse. In town, the responsiveness of the engine and stiff, but comfortable steering mean the driver intuitively knows where the vehicle is going and feels safe getting there. In adverse weather, the AWD system does very well, giving a safe and road-worthy feel to the vehicle.

Competitors to the RX 350 F-Sport are the Acura MDX, Audi Q5, and other, similarly-priced luxury crossovers. The standard RX 350 competes well against the MDX without the upgrade, but the F-Sport model addition brings more fun-factor to the mix, making it a better competitor to the Audi. Most will find that there is a reason the 2014 RX 350 sells so well against competitors from other makes: not only did it start it all, it has stayed on top because it delivers it all well too.

Unless you need a third row of seating or higher towing capability, in which case options from Detroit makes may be more appealing, the 2014 Lexus RX 350 is a vehicle that should be high on your list of considerations. The F-Sport model adds some things that buyers may be looking for, such as the more throaty engine appeal and slightly better handling, but either way, there is no reason to discount the RX 350 when shopping around.

Test Period Length and Limitations
Vehicle was driven as a manufacturer’s press loan for about a week. A total of 366 miles were put on the RX 350 in a mixture of moderate, cold, and freezing temperatures and various accompanying weather conditions in Southeastern Wyoming. Driving included town, city, highway and freeway.

Spoken word version can be downloaded here (MP3) or listened to below.