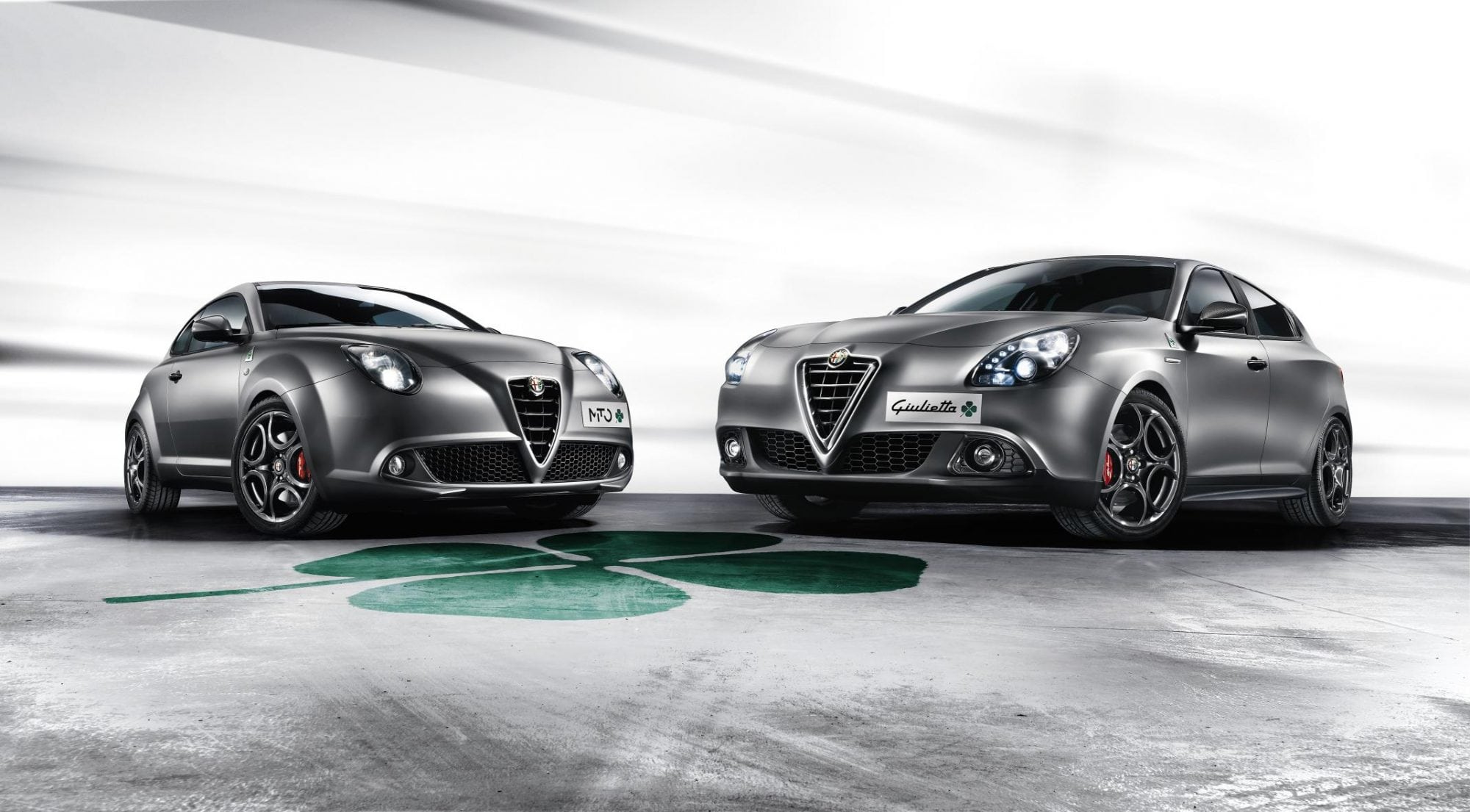 Alfa Romeo will be unveiling the new Cloverleaf models (“quadrifoglio verde” means cloverleaf) at the Geneva International Motor Show next week, with fitting timing for us Americans as we celebrate Saint Patrick’s Day soon as well.

The new high-performance models of the MiTo and Giulietta will become the latest in the Quadrifoglio Verde heritage line, which began about 90 years ago. The Giulietta Quadrifoglio Verde will share the same high performance engine that the new Alfa 4C carries. That 1750 turbo-charged gasoline engine – complete with direct-injection; dual variable valve timing; an anti-lag, turbo scavenging control system and a lightweight aluminium engine block – which delivers a maximum output of 240 hp at 6,000 rpm and an impressive 250lb ft (340 Nm) of torque between 2,100 and 4,000 rpm. The new Alfa Giulietta QV accelerates from 0 to 60mph in just 6.6 seconds, 0.2 seconds quicker than the current car, and can reach 149 mph.

That impressive little engine combines with an ALFA TCT six-speed twin dry-clutch transmission, which offers both fully automatic and sequential manual shifting. A new fuel intake unit will be fitted to the Alfa Giulietta QV to enhance its motor sounds.

The Alfa Romeo Giulietta Quadrifoglio Verde has unique exterior styling to distinguish it from its standard-issue counterpart (as much as the phrase “standard issue” can be used with an Alfa Romeo). A glossy anthracite finish on the door mirror, front grille, door handles and fog light bezels begins its changes along with anthracite alloy rims, side skirts, and rear spoiler. Large exhaust tail pipes and red, four-piston Brembo brakes finish the look. A Quadrifoglio Verde emblem adorns the front wings.

A limited run of Launch Edition version of the car will be offered, with just 500 to be made. This version includes carbon body accessories and exclusive 18-inch alloy wheels. The new Cloverleaf version of the little MiTo has significant powertrain changes along with several aesthetic updates to note its QV heritage. Under the bonnet of the little MiTo Quadrifoglio Verde is a 1.4-liter MultiAir Turbo Petrol engine outputting 170 horsepower at 5,500 rpm and up to 250 Nm of torque at 2,500 rpm. Fuel consumption is reduced thanks to an electrohydraulic valve management system to control intake air directly via inlet valves rather than the throttle.

That engine outputs to the same six-speed dry-clutch ALFA TCT in the Giulietta QV. The Alfa Romeo MiTo in this configuration achieves 52.3 mpg on the Euro combined cycle yet runs a 0-62 mph in only 7.3 seconds and tops out at 136 mph.