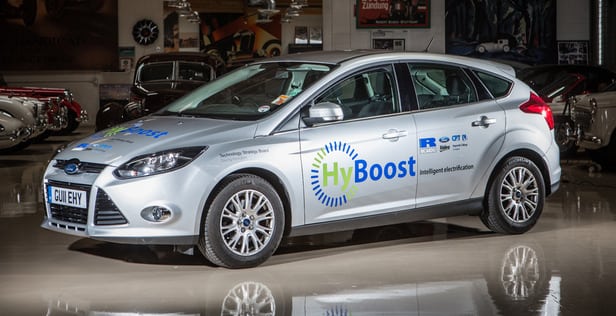 Ricardo, which has been around for a long time and most recently was a collaborator with McLaren on the beautiful P1 hybrid, was on Jay Leno’s Garage with an innovative new hybrid option that costs only about $1,100 to implement in an existing Ford Focus.

The system is a great blend of existing technology. By removing the 2.0L engine from the Focus and replacing it with Ford’s new 1.0L, then adding a few components to spool the turbo booster (Formula One style) through a starter-generator and supercapacitor storage, the car achieves roughly the same power output (145 horsepower) with higher torque values as the engine it replaced. All at about half the displacement.

The setup costs just over a thousand dollars to implement and was first tried in 2009. Since then, it’s matured, and Ford, Ricardo, and other partners are now working on a next-generation version using Ford’s newer engine technologies and more advanced batteries to replace the supercharger (moving the car to a 48V system).