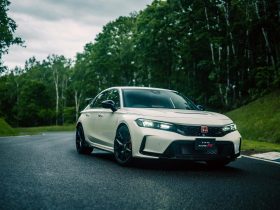 This television show enters living rooms in January globally and features not only beautiful classics of automotive vintage, but also of the human. Headlined by once-Top Gear founder Quentin Wilson and supermodel-turned-race driver Jodie Kidd, the show uses a combination of cinematography and quaint British auto reporting to showcase classics as they’re meant to be seen by the masses. The locales, mood lighting, and narrative are mysterious, lush, and just out of reach. Much like the cars being shown. –TorqueNews.com When a 50-year-old Ferrari sells for $52million, it’s time to go under the bonnet. Richly shot with movie quality production values, The Classic Car Show is currently on location filming some of the world’s most prestigious and glamorous cars with A-list contributions from the likes of David Gandy, Bruno Senna, David Coulthard and Sir Stirling Moss. Everyday classics are also heavily featured in a series that covers all aspects of the classic car world.

Over the last ten years the classic car market has become a multi-billion dollar industry with values growing ahead of equities, fine art, wine, gold and London real estate. Top end Ferraris have increased in value by 55 per cent in 2013 alone** and collectively the classic car market has grown faster than any other asset class, increasing by 257 per cent since 2005***.

It is this growth, global intrigue and unparalleled glamour that has driven the creation of the series. Presented from a bespoke studio at the famous Brooklands racing circuit in Weybridge, Surrey (the world’s first purpose-built racetrack), The Classic Car Show will provide an entertaining, visually compelling, peak-time TV series, produced not just for those who can tell a Ferrari 250 GTO from a 275 GTB, but for the whole family, encompassing humour, attitude and heart-warming charm.

The Classic Car Show is produced by Jim Wiseman and Stephanie Fox – who have backgrounds in Top Gear and Top Gear Live – and the format brings a truly global magazine perspective to viewers. The multi-million pound production budget also means that the cars and personalities featured receive the high-end gloss HD treatment they deserve.

Globally distributed by Sony Pictures Television, one of the industry’s leading content providers who deliver programming to over 200 countries worldwide, The Classic Car Showwill be formally launched at MIPCOM* in October. Quentin Willson commented: “No-one has filmed a classic car series like this before. We’ve got gorgeous cars, A-list celebs, passionate stories, an extraordinary filming budget and endless enthusiasm. The Classic Car Show is an amazing insightful series without a socket set in sight.”

Jodie Kidd said: “Classic cars are beautiful, sexy and evocative; when you climb in and turn the engine something magical happens. The Classic Car Show is a back-stage pass to one of the most exciting and exhilarating forms of art that we have.”

Bruno Senna commented: “Driving 10 of my favourite classic cars on the track was one of the highlights of my year. I’ve loved being involved in the series; it’s great to work with a team with such passion for what they are doing.”

Sir Stirling Moss, the most famous racing driver in the world, said: “What they are doing with this show is impressive, it is going to introduce the world of classic cars to a whole new global audience.”

David Gandy, model and classic car enthusiast, commented: “This is the car show I have always wanted. I think I was born in the wrong era – my style and the way I like to drive are far more suited to these classics. You just don’t get that character and class with modern motors.”

The Classic Car Show will be globally released as a 13 x one-hour series in January 2015. See the trailer at www.classiccarshow.com or on YouTube: http://bit.ly/U9BKMN