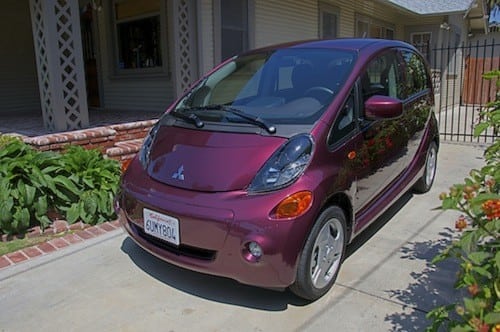 Will Mitsubishi ignite another electric car price slash with its i MiEV? Have you ever gone to a car show and been envious of all the cool high tech gadgetry in new cars today?  Well a new HeadUp display (HUD) called Navdy is aiming to change that.

The aim of the people behind Navdy is to bring next generation HeadUp (HUD) displays to any car that is equipped with an OBD2 port.  The Navdy can be controlled by using your voice or hand gestures and it seamlessly pairs to most smartphones out on the market like iOS and Android devices.  Since the average age of cars on American roads is 11 years, it ain’t a bad idea.  This also means you can roll in style with current car tech without actually have to go buy a new set of wheels.    Of course… these units haven’t actually gone on sale yet and the company is resorting to usual crowfunding creativity to get the Navdy into the hands of consumers.

Right now the people behind Navdy are trying to raise money to actually bring the Navdy to market.  That means they haven’t actually built them since… you need money to make physically products which they don’t seem to have.

You can pre-order a Navdy unit within 30 days of the below video’s posting (August 5th) at the “introductory price” of $299.  This is a 40% discount from its expected retail price of $499.  That means it could cost more than $499.  If you are an early Navdy backer though you can get $30 for for each friend you refer that buys a Navdy.  If you refer 10 people and they buy one, you get a Navdy unit for free.  Sounds some like BS crowdfunding to me… but whatever.

In essence this is a good idea but who is going to recommend a product they haven’t actually used?  Sounds a bit like Elio Motors funding shenangins but don’t get me wrong I wish this company the best.  If the Navdy does come to market I might actually considering using one.  Poor auto journalists certainly get many opportunities to drive new cars, but we can’t afford to buy new cars.  Therefore my in car tech is sort of old, ya know.

For a better explanation of Navdy and how it works you can watch this bearded man (Doug Simpson, Navdy’s CEO), that looks like he could benefit from some running, explain it in more detail.

UPDATE – The guy in this video for the Navdy is not Doug Simpson but rather Adam Lisagor, who is known for doing videos for start-ups I guess.  Don’t know who he is but people named Adam and really cool. 🙂

Navdy announced on 8/5 a breakthrough Head­Up Display (HUD) aftermarket car console that allows drivers to access their smartphone’s apps while keeping their eyes on the road. Navdy combines a high quality projection display with voice and gesture controls to create a safer, highly intuitive driving experience. Combining advanced display technology with touch­less controls means drivers no longer need to fumble around with their phone to navigate, communicate or control their music.

1. Breakthrough display technology: Projects a bright transparent image directly within your field of vision that appears to float six feet in front of your windshield, allowing you to keep your eyes on the road while simultaneously seeing navigation instructions or incoming phone calls. The device comes with advanced dimming and stabilization controls, to optimize usability in any driving conditions.

2. Car­tailored Interface: When your smartphone apps appear on Navdy they are purposely simplified to show you only what you need, when you need it, and minimize distractions. Your navigation will not disappear when a call comes in; Navdy will display both notifications and navigation at the same time in a split screen. Visual elements such as image complexity, placement, or font size, are consistent across apps to make the user experience pleasant and predictable.

4. Works in any car: The device mounts on a flexible footer that fits on practically any car dashboard, and is powered by plugging in to the onboard computer (OBD II port), available in all cars produced since 1996. This makes the only required cord less intrusive, while providing car status information to the Navdy processor.

5. With all the Apps you need: Navdy works with popular navigation apps like Google Maps to display turn­by­turn directions; it controls your music apps like Spotify, Pandora, or Google Music; it reads or displays notifications from text messages or social media apps, fully controlled by its Parental Control settings; and it displays car alerts such as true­speed, miles­to­empty, or battery­voltage from its access to the car’s computer.

6. Portable and compatible: Navdy works with iPhone (iOS 7+) and Android (4.3+) smartphones, and can move easily to another car or another smartphone. Once a Navdy has been paired over bluetooth for the first time, it can share data with your phone over wifi. Navdy does not require it’s own data subscription service. Initial device dashboard placement takes 60­90 seconds. Slightly longer if you read instructions.