If you follow us here on CarNewsCafe you will know that we like posting videos from Jay Leno’s Garage.  What auto enthusiast isn’t jealous of all the cool and collector cars Jay Leno owns?  While we like classic cars we don’t have our hands in the sand and also like sharing news about future car and vehicle technology.  Well Leno also likes to explore and test new vehicle technologies and recently he got to test drive a purpose built electric race car between doing a comedy gig in Pennsylvania at the American Music Theatre in the parking lot.  Check out the video below.

Jay Leno drives EVSR. On tour doing stand up Jay Leno takes a few minutes to experience EVSR #82, one of Entropy Racing’s fully electric race cars, in the parking lot of his most resent gig. Entropy Racing has built two EVSRs with the plan to expand the program into a full series of electric race cars. Thanks to Jay and all of his staff for making this event possible.

The car is called the Electric Vehicle Sports Racer, or EVSR, for short and is made by Entropy Racing.  While there is a new Formula E series that is FIA sanctioned (the same governing body that oversees Formula 1) that just got started, featuring all electric cars, that series is cost prohibitive for most racing teams.  Electric car racing needs lower tier divisions so people can participate, learn, and grow and improve the technologies that electric cars use.  This would also help Formula E to gain traction and be successful in the long run.

The goal here it seems is to develop relatively low cost electric race cars that can be used in track days, hill climbs, and other racing events.  Currently Entropy only have two EVSR’s built but hope to build more cars in the future and maybe even start an EVSR racing series themselves.

“It goes good.  It’s eery… Yeah, it’s a lot of fun.” commented Jay Leno about his drive in the electric race car.  Leno has featured many electric vehicles on Jay Leno’s Garage and recently he got to test ride the Harley-Davidson LiveWire, which is an electric motorcycle.

While this video wasn’t posted on Jay Leno’s Garage channel, but rather the EVSR team’s channel, we still like seeing Leno be open minded about new racing technology.  What are your thoughts about electric race cars? 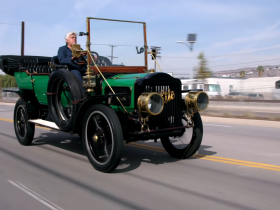