The starter motor on a car rarely fails. Usually it’s the parts that connect the starter motor to the engine that become misaligned and cause the starter to no longer engage the engine to start it. Regardless, it means pulling the starter and either replacing or repairing it. Most of the time, replacement is actually the better option. Unless the starter is rare and hard to find, it’s likely that replacing it is the cheaper option, since the old one will go back for refurbishing anyway.

The first thing to do is to be sure that it’s the starter that is the problem. If your engine makes a whirring or screeching noise when you turn the key to try to start it, there’s a good chance it’s the starter.

Watch the dashboard lights and, if you can, turn your headlights onto a wall or solid object and watch them as you turn the key to start the car. If the whirring noise is not accompanied by the lights dimming, then your starter is probably not engaging. If, on the other hand, you get a “clicking” but no whirring or starter noises, your problem is likely the solenoid or battery connection, so check those first.

If you have the tools, it’s a good idea to check the power flow from the battery to the solenoid (there will be a thick, direct wire from the positive terminal). The solenoid is most likely mounted to the starter, but can be on the firewall or near the frame – especially on older vehicles. If you can, also check the resistance the solenoid is giving to power going through against the manufacturer’s recommendations.

If you don’t have the meters for that, try testing the battery with an Ohm meter to be sure it’s putting out at least 10 volts. If not, that’s your problem. Try putting a jumper cable onto the positive terminal, grounding the other, putting the other positive end on the solenoid post (input to solenoid) and seeing if that cranks the motor. Be careful doing this! Be aware that if this doesn’t work, it may be you have an electrical problem with your car’s anti-theft devices. Read the manual thoroughly.

Removing the starter is relatively easy. It will be located at the bottom of the car where the engine and transmission meet. It is often buried, but is nearly always at the bottom rather than the top. It should be accessible without removing a lot of other things to get to it.

It will be held on by 3 bolts (at minimum) which go directly into the engine block or transmission housing. It will look like the photo above. If you cannot locate it and your car is front-wheel-drive (FWD), check on top near the firewall and see if you can see it from there. Before you start work, make sure the engine and exhaust are cool and put on some safety glasses as you’ll likely be working upwards and will have things falling onto your face. Remove the battery ground and fully stabilize the car (either on jack stands or with blocks on all four tires).

Disconnect the wires from the starter. There should be two or three: one heavy input from the battery and/or solenoid, a small wire from the ignition, and one ground wire or points-and-distributor coil connection.

Remove the bolts holding the starter to the block. Use a wrench to break all three so they’re easier to turn, then remove them one by one leaving the easiest to get to for last. Using only the socket, remove the last one as you hold the starter in place with your other hand. Otherwise it’s likely to fall on you. If not, jerk it a few times and it will come free.

Make one of the exposed ring gear points with paint or chalk and mark the equivalent spot on the open hole where the starter was. Use a heavy screwdriver to turn the engine one full revolution, checking the teeth on the ring gear as it goes. Make sure there are no broken or compromised teeth. If so, you have a much bigger problem than a bad starter – in fact, your starter is probably OK.

Most likely, the bendix gear is what has the problem – or more precisely the armature that presses it into the ring gear and allows it to retreat once the engine is running.

You can try to replace this stuff yourself, but in the end, it will cost you roughly the same as an already rebuilt starter would (after core trade-in) if your starter is not uncommon. The new starter may look much smaller because today’s starters use reduction gears to allow them to be smaller while putting out the same power. This is a good thing when you’re installing, since it weighs much less.

Installation is the same as the removal, but in reverse. Make sure your marks on the ring gear match, then slide the starter into place. You may need to turn the starter gears manually a little to make it mesh. Be patient and get it right. Everything should come pre-greased and lubed, so you’ll just need to pop it into place.

Some may require shimming, but this is not normal if you’ve got the starter to match your vehicle. Be sure to check the torque requirements for your starter’s mounting bolts (if any) and replace the bolts if you can – many replacement motors come with new bolts.

Plug all the wires back into place, double-check your work, re-connect the battery ground and try the key. 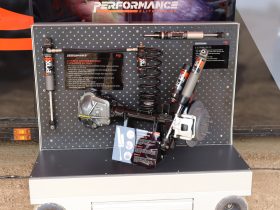