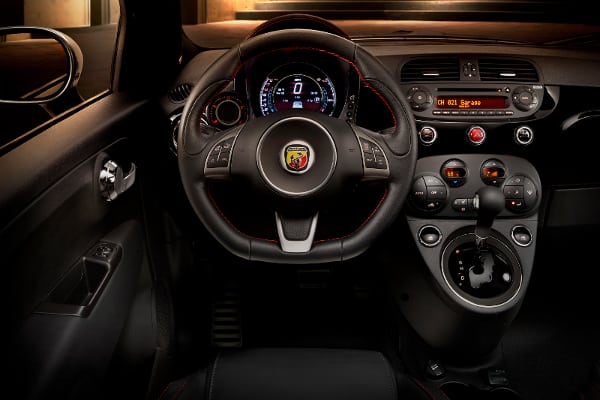 Fiat to offer Fiat 500 Abarth & Turbo with an Automatic, Gearheads Cringe then Puke

Call them what you will: supercars, halo cars, dream cars.. whatever they are, they’re the cars that sell posters that kids put on their walls. Bedrooms, dorm rooms, shops, garages, and rec rooms all have one thing in common: posters of cool cars. It used to be just a “guy thing,” but now girls get in on the act too, putting up posters of Maseratis, Ferraris, Lamgorghinis, Camaros, Aston Martins, Mustangs, and Challengers. Posters that may or may not include scantily clad humans alongside or astride the shining chrome and steel machines. The thing is, neither Chrysler nor Fiat have “halo cars” that sit atop their lineups as the car we all lust after. Sure, the Chrysler 300 is a big, beautiful machine, but it’s not a “poster car.” Fiat, on the other hand, does have the 500, which likely adorns the walls of many a girl’s room. We know the Fiat 500e is posterized on the wall of some green performance fanatics with long hair and goatees, but we won’t name names.

Chrysler, though, doesn’t have a true halo car. Dodge has the Viper, Challenger, and even the Dart. All three of those are poster worthy in one format or another. Ram Trucks has, well, trucks. There are plenty who’ll hang posters of those on their walls, usually right next to their Skoal and Marlboro posters. But Chrysler doesn’t have anything. That needs changin’.

This is a brand that should have a poster car, really has tried to make a poster-worthy car, but that just hasn’t yet pulled it off. If the Q50 Eau Rouge ever made it to production, Infiniti would finally have its halo car. Infiniti is hot in Formula One, has shown off concepts made for video games like Gran Turismo, and has had plenty of other show cars worthy of the title “supercar” in the past few years. Yet they just haven’t quite gone to production with anything worthy of being on a poster alongside a Koenigsegg. Maybe now that Infiniti has been infused with new management, things will change. Maybe.

Lexus is Toyota’s premium brand and as such, maybe shouldn’t be on this list. Toyota is, after all, the king of “everyday” and the Lexus lineup showcases how one design can be re-used over and over and over.. ad infinitum throughout a lineup. This doesn’t mean Lexus cars are ugly or boring, just.. well, cookie-cutter. Kudos to anyone who can tell the difference between a GS and an LS and an ES without looking at the deck lid.

Of those on our list, though, we think Lexus, odd as this may seem, is probably the most likely to be the next brand to roll out a supercar for production. Their F-SERIES sport brand line is just begging for a halo car and the writing is clearly on the wall as now-defunct awesomeness like the LFA and production cars like the RC make it clear they’re headed there.

Ahh, the little company that could. Mazda has some great vehicles and beautiful design language going on. The company really, really wants their Miata (aka MX-5) to be their halo car and it certainly has been the subject of many a poster on many a wall. Sadly, though, the Miata is just not “that” and most of those posters faded out in the 1980s. The Miata, popular as it is, is mostly seen as a toy rather than a supercar. Back in the day, the RX-7 was the hottest rice rocket on the planet. Now.. Mazda’s got nada. Oh, Suby. Such a fine little company making such fun little rides. In the end, the closest thing that Subaru has to a supercar is the BRZ and while it’s great, it’s a Toyobaru and it just doesn’t seem as authentic that way. It’s also not all that fast and tuners have largely ignored it in favor of the  Scion FR-S; which seems to be a bigger hit with the younger crowd these cars are aimed for. Subaru is in a unique position as well, having basically cornered the term “All-Wheel Drive” as being ubiquitous with their brand. This begs for a GT-R killer, Sub. Really. Think about it. Nissan, whose entire lineup of cars are all front-wheel drive, has an AWD supercar. Hello! Time for the Subaru Mothra to come slay the Godzilla. See? I even named it for you. Get to work.