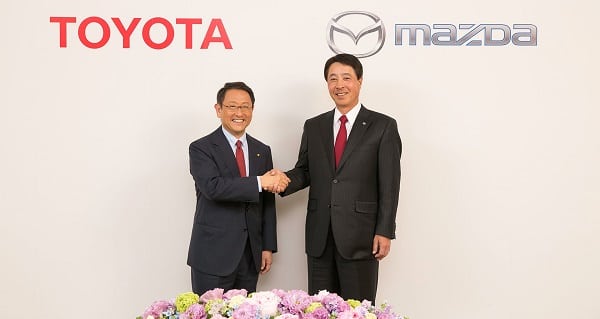 Toyota and Mazda have announced a joint strategic partnership to share technologies, specifically in high-compression platforms and hybrid-electric systems.

The announcement came as a bit of a surprise to the industry, as Mazda is a relatively small player compared to Toyota, but both have technologies that the other can use and the strategy may bode well for green car enthusiasts. The only one that should be worried here is Ford, who will likely see the collaboration lead to direct competition for their hybrid and plug-in cars.

Toyota, meanwhile, has little in the way of turbocharging and nothing in terms of high-compression engine options. These are techs that require a lot of engineering and testing before they’re ready for market and Toyota is in a scramble to stay at the forefront of the green car market (in terms of branding), having vested itself entirely in hybridization techniques rather than plug-in and battery-electric options. Mazda, meanwhile, needs electrification to keep its powertrains ahead of the fuel economy curve. Together, the two have exactly what their new partners need.

Expect to see a collaborative vehicle project come out of this, similar to the Toyobaru (Scion FR-S, Subaru BRZ, Toyota FT86) and for each to roll out combinations of the tech in other vehicles down the line.

Original story appeared on FutureCars.com. See video of the press conference at TorqueNews.com.