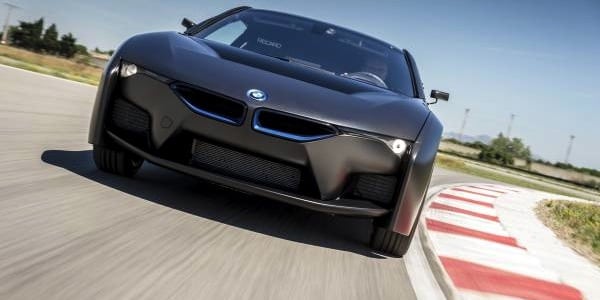 When we drove the BMW i8 last summer, we didn’t think anything could get better about this supercar of awesomeness. We were wrong.

BMW is using the i8 as a test mule for a new hydrogen fuel cell system. They showed off the project in France at an event. BMW brands itself as driving excitement and innovation. For that latter half, the Group Innovation Days were a perfect platform to showcase what they’ve been experimenting with. Including this hydrogen-powered i8.

The concept for the BMW i8 Hydrogen was first developed in 2012 utilizing the same carbon fiber body and frame of the production i8, but with a hydrogen fuel cell where the engine would be (behind the cabin). BMW says that work has progressed to the point that this new BMW i8 with the hydrogen fuel cells is lighter weight and has a 300-mile range using H2 alone. Hydrogen is stored at 350 bar.

The prototype outputs 268 horsepower and does 0-60 in about six seconds – a couple of seconds slower than the production i8. Top speed is around 124 miles per hour and does all of this with zero emissions at the tailpipe. Refueling takes about five minutes.