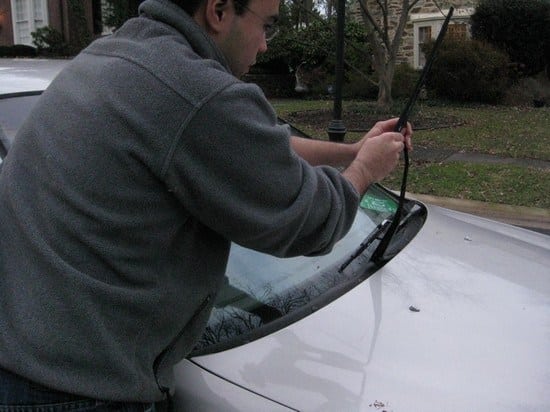 How to Replace and Install Windshield Wipers on a Car [VIDEO]

Some people work for a living and don’t care much about what the job is, so long as it’s a steady paycheck. Others prefer to go their own way and scrape by doing something they enjoy. Sometimes that works out, sometimes it doesn’t. For most of my adult life, I’ve taken that route, occasionally working for someone else, but always with the goal of starting up something on my own as soon as I could do it. Finally, I fell into something I love and have wanted to do for most of my adult life.

I write for a living. That might seem like a good profession, but it’s just one facet of my overall job. I wanted to write because I had this glamorous idea of what writing was all about. I imagined sitting down for a couple of hours every day tapping into a keyboard as wondrous thoughts and profound ideas spewed forth onto the computer screen and, eventually, to my printer. From there publishers would fight over who got to pay me the most to utilize my immense talents in their magazines, newspapers, and books. The reality, of course, is that most of the work involved in writing is finding someone who wants what you’ve written. Or will pay you to write something they want written. It’s not very glamorous. Nor does it pay particularly well, considering the hours spent.

The good news is that all that scribbling and typing I did growing up and while working other jobs have paid off. I wrote thousands upon thousands of pages, most of them bad attempts at fiction or pale prose pretending to be editorials or opinions. Luckily, few of those pathetic scribblings survive today. I say lucky because the last thing I need is someone digging that stuff up and printing it, showing off my incompetence. But all of that work honed my writing into something better than average. I may not be a shining star amongst the other professional writers, but I’m better than all of those who wish they could do this for a living. That’s something. At least, it is to me.

But writing is just the final product of what I do for a living. It’s what gets me paid. So that I can do what I really want to do. Drive.

Early on, I realized that my favorite form of recreation was not drugs, alcohol, or even women. No, my favorite form of recreation was driving. I worked at a wrecking yard as a teenager and found it fascinating to walk the aisles and look at the various vehicles and their constituent parts. I would go to car shows and oggle the pristine restorations lining a lot or field. I learned to wrench on cars and trucks, what the differences between carburetors and fuel injectors were, how timing chains and belts did their job, what an overhead camshaft was and why two of them was even better.. Meanwhile, I drove my heaps – I couldn’t afford much, but got lucky with my first car, a 1984 Toyota Corolla LE, a nearly bulletproof car. From there I owned an International, a Ford, a Chrysler, another Toyota (this time a pickup truck), a Honda, and now a Mazda. I loved and still love driving cars, looking at vehicles, and talking about automobiles.

Eventually, upon realizing that my business (working in IT) was over the edge and falling into bankruptcy fast, I decided to try something else. I got a little job and worked for a while and then attended trucking school. We needed to move to someplace that was more cost-effective and less crowded. I eventually became a truck driver, which allowed me to drive all of the time, go places I’d never been, and get paid to do it. It seemed ideal. Looking back on it now, it was; except for one thing. I was married and hated being away from home for so long. We didn’t have kids, but being away from her, on the road, all the time, for weeks on end was tough on me. I finally decided that I was going to have to come up with something else. In the meantime, we’d purchased a house and moved to Wyoming. All I needed now was a grub stake and an idea of what I was going to be doing once I left that truck.

As I’d been driving, I’d still been writing as well. My earlier days of writing about business ideas and ways to profit online were long behind me. That had been my sideline while I’d been working in IT. Now I was writing for little trucker’s magazines and truck stop circulars. Mostly about life on the road or about specific products or places I’d stopped. It didn’t pay much, but it was fun. I decided to turn to freelance writing, this time with earnest and with an end goal in mind. I didn’t want to write about trucking anymore. At the time, I specifically wanted to write about alternative powertrains, new types of transportation, cars, and video games.

I took a lot of non-automotive writing jobs initially, hoping to just break into anything and start making some money and getting my name known. I approached it wrong, though, aiming for the paycheck more often than the byline. I did a lot of “ghost writing” (writing under someone else’s name at their request), which paid, but didn’t build a reputation. Soon, though, I met some people who wanted me to write as me. And about cars. From there, things kept getting better.

I began learning the business of automotive journalism: joining press clubs, building a network of friends in the business, finding more and better outlets, etc. It didn’t take too long for that work to pay off in the form of a brand new car in my driveway, given for a week courtesy of an automaker who hoped I’d write about it. Then my first press junket. Then more cars. And more cars. I stopped pursuing the press junkets, which were fun, but rarely paid and the drive time was short. I focused instead on getting press loans – vehicles brought to me and left for a week or so. I found more and better outlets to write reviews and commentary about the cars I was driving and that, in turn, meant more vehicles.

This focus paid off in a relatively short amount of time. In about three years, I went from being totally unknown in the automotive industry to having 60 cars in 52 weeks in 2014. This year, I’ve already beat that number and may get close to 100 by year’s end.

On average, I put about 200 miles on a car during the week that a manufacturer leaves it with me. Sometimes a lot more. I spend hours behind the wheel, under the hood, looking underneath, setting up photo shots, giving people around my little town of Pine Bluffs rides in cars they’re interested in, etc. And talking about cars. I talk about cars constantly. Ask anyone who knows me. I now have regular access to just about every major automotive make available in the United States. And I love it.

I don’t care what the vehicle is. I’ll drive heavy-duty pickup trucks, tiny subcompacts, luxury cars with six digit price tags.. whatever you’ve got, I’ll drive it. This has also meant that I’ve been able to drive or ride in some very cool machines. I drove a 1965 Dodge Dart GT, tooled around behind the wheel of a 1967 Corvette Stingray, rode in a 1969 Dodge Challenger R/T, took to the track in a 2015 Dodge Viper SRT, squealed the tires in an electric-powered semi-truck, and convinced a preacher that he should consider owning a car with the name “Hellcat” on it. Among other things.

In a nutshell, my job is to drive around Wyoming in cars other people gave to me and then tell people about the experience. This is the perfect job for Aaron Turpen. So I’m gonna keep doing it. Once in a while, I’ll give some inside stories about the interesting things that happened that weren’t reported. That’s what Driving in Wyoming will be about. Enjoy!