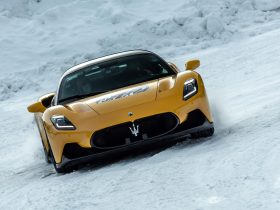 Maserati MC20 In the Snow

The new turbocharged flat-four cylinder engines from the 718 Boxster power the 718 Cayman, making the power output identical for both models. The 2.5 liter powerplant in the S model produces 350 horsepower, while the 2.0 liter engine in the 718 Cayman delivers 300 horsepower. Both models make 25 more horsepower than their respective predecessors. The abundant torque produced by the new engines yields driving pleasure and agility even at low revs. The 2.0 liter engine of the 718 Cayman delivers up to 280 lb.-ft., which is available between 1,950 rpm and 4,500 rpm. This represents a 67 lb.-ft. increase over the previous Cayman. The 2.5 liter engine in the 718 Cayman S features a turbocharger with variable turbine geometry (VTG), technology previously utilized in the 911 Turbo. That engine delivers up to 309 lb.-ft. of torque (37 lb.-ft. more than the previous Cayman S) to the crankshaft between 1,900 and 4,500 rpm. Both engines used in the 718 Cayman models are equipped with an integrated wastegate to optimize boost pressure across driving scenarios. The result: confidence inspiring passing power and superior drivability in any situation. The 718 Cayman with PDK and optional Sport Chrono Package reaches 60 miles per hour in 4.5 seconds. The 718 Cayman S is able to accelerate from 0 to 60 in just 4.0 seconds. The top track speed of the 718 Cayman is 170 miles per hour, and the 718 Cayman S can reach a top track speed of 177 miles per hour.

New chassis tuning for greater cornering precision and more lateral grip
With their superb driving dynamics, the new 718 Cayman models follow in the footsteps of the legendary 718 race cars. Thanks to their outstanding agility, the historic mid-engine sports cars won numerous races including Le Mans and the Targa Florio in the late 1950s and early 1960s. Firmer springs and sway bars as well as retuned shock absorbers improve lateral grip and tracking stability. The steering rack with a 10 percent quicker on-center ratio compared to the previous model has been adapted from the 911 Turbo and enhances agility as well as driving pleasure. The rear wheels, which are one-half inch wider, and a new generation of tires increase lateral grip to allow for even better cornering. Performance enhancing options such as the Sport Chrono Package and Porsche Torque Vectoring (PTV) sharpen the sporty character of the 718 Cayman even further. Porsche Active Suspension Management (PASM) with a 10 millimeter reduction in ride height is also optionally available. Furthermore, the S model can be ordered with the PASM Sport suspension for the first time, which lowers the car by 20 millimeters. As in other Porsche sports cars, the Sport Chrono Package can now be adjusted using the Mode Switch on the steering wheel. Supplementing the previous settings of “Normal,” “Sport,” and “Sport Plus” is the “Individual” program, which can store and call up the driver’s preferred settings.

Due to the car’s increased performance, uprated brake systems with 330 mm brake rotors at the front and 299 mm rear rotors are now standard. The 718 Cayman uses the brakes from the previous Cayman S, while the 718 Cayman S is equipped with the four-piston calipers of the 911 Carrera combined with six millimeter thicker front brake rotors

Distinctive design for a more muscular appearance
The new 718 Cayman has been enhanced as comprehensively in its design as it has in its technology. The taut proportions, prominent air intakes on the sides and at the front, as well as the low side profile underscore the uprated dynamics. The front fascia has a sharper profile, which gives the front of the car a wider and more muscular appearance. The ultra-slim front lights above the air intakes, which house the positioning lights and indicators, reinforce this impression. Significantly larger cooling air intakes and Bi-Xenon™ headlights with integrated LED daytime running lights also characterize the new 718 Cayman. LED headlights with four-point daytime running lights are available as a new option. The redesigned rear fascia appears wider than before due to the high-gloss black accent strip with integrated Porsche logotype. The taillights have been completely redesigned and are distinguished by the three-dimensional look and four-point brake lights that appear to float freely.

Redesigned interior with standard PCM
Inside, revisions are visible for both the 718 Cayman and the 718 Boxster. The upper part of the dashboard and the air vents are new. The new 918 Spyder design sport steering wheel and extensive connectivity options have now been added to the 718 cockpit. Porsche Communication Management (PCM) and the eight speaker Sound Package Plus audio system are standard. The capabilities of the PCM can be extended with options such as the Connect module. It includes special extensions for smartphones, such as the USB port, Apple CarPlay and Porsche Car Connect. Another available option is the navigation module with voice control, which makes it easy to enter driving destinations. The Connect Plus module offers real-time traffic information, Apple CarPlay, Google Earth, Google Street View, and WiFi connectivity. Drivers can also make use of additional comprehensive services via their smartphone, which include the Porsche Connect App and Porsche Car Connect.