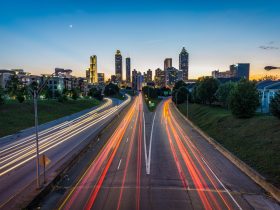 4 Things You Need to Know Before Driving In Atlanta

When you think about the cost of a car, you tend to think about the money that you put down to actually buy the thing. Of course, that’s definitely going to be a serious consideration when it comes to your vehicle and is going to have a significant impact on the kind of car that you’re able to purchase, but it’s a big mistake to assume that the costs of car ownership begin and end there.

In fact, in the long run, it might end up being one of the lesser investments that you make in your beloved vehicle. There’s a reason that people say buying a car is one of the most expensive things that you’ll ever do. They don’t just mean how much is costs to buy, but how much it costs to actually own. With that in mind, here are a few things that come with owning a car that could well end up costing you far more than you ever thought.

If there’s one thing that every car owner knows is that insurance costs can be a real pain in the behind! We all know how important it is and there are few responsible people out there who would dream of driving around without it, but that doesn’t make the sting of having to shell out large amounts of money on it any easier to deal with. But there’s actually a pretty good chance that the vast majority of people are paying more than they need to on their insurance premiums. The first and most obvious way to reduce the amount that you’re paying is simply to drive as safely and carefully as possible. Insurance premiums tend to go through the roof when you drive around like a complete maniac, running red lights and flaunting speed limits. But you can also allow your insurance company to install a black box that monitors your driving and will help to bring your payments down. The kind of car that you own will also have a big impact on how much your insurance costs if you want to save money on insurance then it’s a good idea to look at cars with smaller engines and a bit less power.

If you’re able to, then it’s worth thinking about paying your insurance in one annual sum as well. It might seem like paying month by month will save you money, but there is usually a pretty heavy amount of interest put onto monthly payments that can really add up over time.

In a perfect world, every driver on the road would be as careful as possible, and no one would ever get into any accidents. Unfortunately, as you might have noticed, you don’t live in a perfect world, and there are more than a few people driving around in a way that puts themselves and everyone around them in some pretty serious danger. No matter how careful you are, there’s always a chance that you can fall victim to a driver like this.

If you’re properly insured, then that will help to cover a lot of the costs, but things like personal injury can cause some fairly long-term problems. If you’re injured, then it can make working very difficult which, depending on the type of work you do, can leave you without an income for much longer than you would like. Fortunately, there are plenty of places that you can go for help after a crash that will help you to avoid the loss of income that dangerous drivers force onto you.

The same goes for your car becoming undriveable after an accident. Losing your car is going to have a serious impact on your life in general and, if your insurer doesn’t provide a replacement while yours is being repaired then you’re going to end up pretty much stuck, costing you precious income and making life more difficult in general.

When you’re buying a car, you might assume that the best option is to buy an older used car that will end up costing you less up-front. Now, this is actually a pretty smart move; cars depreciate fairly steeply over the first couple of years so an older car can end up costing you far less than the same one from just a little bit later. But be warned, there’s a trade-off that comes with that initial value.

A new care will often have a warranty that covers you for at least a year. Not only that but a new car is far less likely to need any essential maintenance within the first few years of ownership than a used one. There are certain parts of a vehicle that will need replacing after a certain amount of miles. If you’re not careful, that used car that seemed such good value when you bought will end up costing you far more than you ever expected simply because of the number of repairs and replacements that will need to be made. The best way to avoid this is to get the car checked by an independent mechanic before you buy it so that they can tell you exactly how much it’s going to end up costing you over the first couple of years. Armed with that knowledge you can either find a different vehicle or use it to haggle the price down with the dealership. Don’t be afraid to stand your ground; a car dealer will want to make a sale so as long as you’re not going completely overboard with your offer, they’re pretty likely to want to meet you somewhere in the middle. The most obvious, and most regular cost of owning a car is going to be your fuel. Unless you decide just to keep in on your driveway as an extremely large, extremely expensive ornament, you’re going to need to fill the tank up with petrol from time to time. The typical attitude is that a smaller car is going to be more economical that one with a larger engine. And that’s a pretty attitude to take most of the time. Of course, there are always other considerations to make.

Figure out how much driving you’re going to be doing and what kind. If you’re going to be mostly doing city driving without spending much time going at higher speeds, a smaller engine is going to be perfect, and you’ll find your fuel costs being as close to minimal as possible. But if you spend a lot of time driving at higher speeds over long distances then it’s going to have a pretty significant impact on your engine and fuel consumption. If that’s the case, then a slightly larger engine may actually end up being more economical.

It’s also a good idea to keep your speed down as much as you can. When you’re on the highway, it can be pretty tempting to open the engine up and get up to high speeds, but that can cause your car to start burning through fuel like you would believe! Keeping your speed down could half the amount of gas that your engine guzzles on long journeys.

These might be the most significant, but this list doesn’t even cover all of the costs that you’re probably going to have to deal with, far from it! It’s a good idea to think about roadside assistance so that you don’t end up stuck by the side of the road with no one to come help out. You’ll also need to pay car tax and registration costs which could end up adding up to some pretty hefty annual payments. That’s not even mentioning that if you purchase the car on finance, you’ll probably end up paying interest in it as well which means that, even if the payments are spread out, you could end up paying more than you thought. Make sure that you pay close attention to interest rates when looking at any finance deals.

None of this is designed to discourage anyone from getting a car, after all; a vehicle is pretty much necessary for getting through most of daily life these days. But the last thing you want is to end up in a position where you didn’t realize how much it was really going to cost you and you end up in some financial hot water. Make sure that when you’re figuring out what you can afford when buying a car that you take these things into account and look beyond the basic up-front costs. That way you get to figure out a far more accurate budget that will help to prevent your car becoming a burden when it should be something that makes your life easier and more convenient.