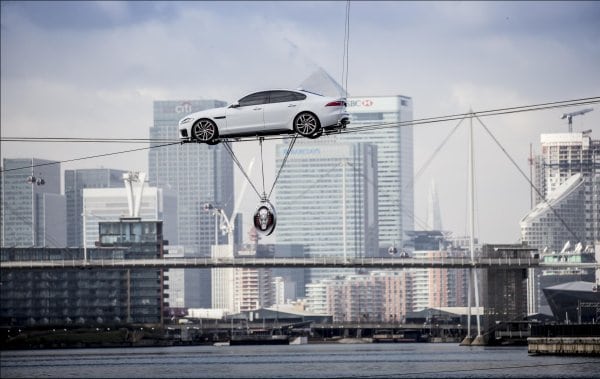 Jaguar XF Makes Its Debut On the High Wire

When it comes to luxury sedan motoring, you’ve got a few choices available to you. As it turns out, many of your options will come from well-known German brands like Audi, BMW, and Mercedes-Benz. But, have you ever considered a British born-and-bred luxury vehicle from Jaguar?

If you haven’t, then you’ve probably not considered the Jaguar XFR. Based on the best-selling XF model, the XFR is the sportier, meaner, and more powerful version of the XF. With superb styling and more electronic gadgets than you can shake a stick at, the Jaguar XFR is also reasonably priced in the used auto market these days. So, should you add it to your shortlist? Yes! And, if you’re not convinced, here’s why you need a Jaguar XFR in your life.

Everyone knows that Jaguar is an iconic British motoring marque. The XFR is one of the highest-spec models in the XF range, and it’s also one of the most sought-after cars you can get. Taking a look at the vehicle and its specifications, and it’s not hard to see why.

A wolf in sheep’s clothing, the Jaguar XFR might look like a typical executive mile-muncher, but it offers far more than comfortable car journeys. Under the hood is a phenomenal power plant and will catch out many high-performance sedans, even the BMW M5, believe it or not!

It also comes with a wealth of features and technology as standard. What’s more, you don’t have to sell a vital organ to buy one like you might with its segment competitors. Performance when you need it

Let’s get straight to the business end of things: the engine. As standard, the motor that comes with the Jaguar XFR is a 5.0-liter supercharged V8 petrol unit that produces an impressive 502 horsepower. It will get you from zero to 60 mph in a mere 4.7 seconds; that’s despite the fact the car weighs almost two tons! Oh, and let’s not forget that awesome V8 engine note!

The engine gets mated to a six-speed Tiptronic transmission, as you would expect. Although Jaguar used the same gearbox from the “standard” XF models, it’s had some upgrades done to it so that it can handle the power from the mighty V8. The car is electronically limited to 155 mph, and it’s a rear-wheel drive vehicle.

One question you might be wondering is what the shifting is like from the transmission. Well, if you take out a Jaguar XFR for a test drive, you’ll notice that it doesn’t do many gear changes!

In third and fourth gears, there is a wide band of power that can tackle low and high engine speeds. Not only does that result in less and smoother shifts, but it means fuel economy isn’t that bad either at 22 MPG combined.

If you don’t want to let the transmission do all the work, you can use the paddle controls fitted behind the steering wheel. It’s a feature you would typically find on supercars and high-end sports cars like Ferraris, for example. Clearly, Jaguar has spared no expense in making the XFR a competitive high-performance sedan with all the extras as standard!

The only downside to having paddle controls is the mere fact they are there. Why? The answer is simple: you’ll want to keep hearing the road of that mighty supercharged V8 under the hood (or “bonnet” as our friends across the Atlantic would say).

It probably comes as no surprise that some XFRs have been totaled because of owners getting a little too spirited with their driving style! I suppose it makes sense to get acquainted with a good accident lawyer if you like driving your cars like you stole them!

Still, in all seriousness, the Jaguar XFR is a sedan that deserves to be treated with respect on the road. If you have a need for speed, book some time at a racing circuit. Don’t drive like a maniac on public roads! If someone told you that it was possible to buy a sedan that was as agile as a sports car, you’d probably laugh in their face, right? Here’s the thing: that’s exactly what the Jaguar XFR can offer you!

As standard, the car comes with a plethora of complicated electronics that dynamically adjust the suspension as you drive. So, whether you drive in a straight line down the highway or you go around corners at speed, you’re unlikely to lose control of the Jaguar XFR. What’s more, the big alloy wheels and low center of gravity also aid in its ability to combat body roll.

At low speeds, you don’t have to fight with the steering wheel to park this behemoth. The power steering is light, yet you still have good feedback when driving at normal speeds. Some cars have steering that’s too light at any speed; the Jaguar XFR isn’t one of them.

Stylish interior trim with practical and easy to use systems

One thing you will notice sitting at the front of the car’s interior is the layout of the dashboard controls. It has a pleasant, elegant look to it all. The Jaguar controller system pops up from the center control and is a very futuristic replacement for the traditional “J-gate” shifter from the 90s and 00s Jaguar models.

Moving away from the swish transmission control and the touchscreen infotainment system, you can turn your attention to the craftsmanship and materials used in the interior. Look up, and you’ll notice the headlining is made from suede trim. The leather seats are beyond compare when it comes to comfort, plus you can adjust many aspects of the driver’s seat.

For example, the seat controls allow you to adjust the bolster. That means you can feel like you’re sitting in a comfortable bucket seat than a typical executive leather one!

Jaguar has outdone themselves with the XFR. It’s a sleek, sporty-looking sedan packed with plenty of performance. If you don’t add this car to your shortlist, you’ll be missing out on something special – guaranteed! 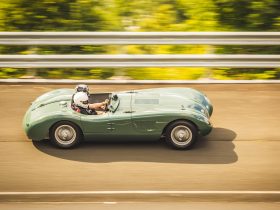