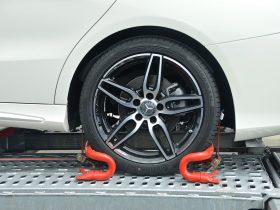 How to Pick a Vehicle Transport Service

There comes a time in every parent’s life where they have to face up to the fact that their kids are old enough to get behind the wheel of a car on their own. Once they’ve passed their test, it’s time to let go of the reins and give control over to them. It’s hardly surprising that this can be a pretty terrifying experience for a lot of parents, but it’s something you simply have to do. Your kids need more independence as they get older and driving is one of the most important steps towards that independence. Of course, that doesn’t mean there aren’t things that you can do in order to keep them as safe as possible. Here are some of the most common issues that come up when your teen gets behind the wheel, and what you can do to help prevent it.

Everyone gets that feeling now and then. You’re driving down the road, maybe you’re in a rush, or maybe there’s just a long stretch of open road ahead of you, and you feel that temptation to open up the engine and hit some seriously high speeds. Of course, the vast majority of us are responsible citizens and resist that temptation. However, teenagers, behind the wheel for the first time, are far more likely to give into that temptation. There are, fortunately, a few things that you can do to prevent this. For one thing, you can simply buy your teenager a car with a smaller engine. The less power they have under the hood, the less likely they are to try and do something reckless. Not only that but you can also have black boxes installed in cars to monitor their speeds so both you, and the insurance company, are always aware of how safely your teenager is driving.

We all know how utterly stupid drunk driving is. There isn’t a person alive who isn’t aware that it’s one of the worst, and dumbest things that you can do. Unfortunately, a lot of teenagers aren’t really known for their common sense. Teenagers shouldn’t be drinking at all, but there’s only so much control you can have over your child as they get older. The best thing that you can do is to educate your son or daughter about the dangers of drink driving. It’s also a good idea to make sure that you’re always aware of when they’re taking the car out. If they’re going somewhere where you know, they might be drinking, suggest giving them a ride, thus taking away all temptation. It might be an inconvenience, but it’s easier, not to mention cheaper than having to hire an excellent DUI lawyer. Even if you trust your teenager implicitly, it’s a good idea to help them keep out of situations where they might be tempted to do something stupid.

Kids are on their phones pretty much non-stop, although that applies to a lot of adults too! To keep them off their phones, again, the best option is simply to lead by example and educate them. Encourage them to lock their phone in the glove box when they set off and only take it out when they reach their destination. It might seem drastic, but it completely removes the temptation to look down at the little screen while they’re behind the wheel.