Seeing the Forest(er) for the trees: Subaru Forester continues evolution to offer broader appeal to the consumer

Small cars look better with hatchbacks. That may just be my opinion, but my tester this week proves that to be quite factual. In fact, new for this model year on the 2017 Honda Civic is a redesigned hatchback. The new-look Civic is attractive anyway, but as a hatch, it’s absolutely the best-looking car in the segment. Add in a new turbocharged engine, and the Civic Hatchback is easy to review.

On looks, it was love at first for me. Honda debuted the hot hatch to a bunch of us in the media at an event In San Francisco. It may have been the intoxicating backdrop of the San Fran skyline, but the back end of the Civic Hatchback just grabs your attention. Generally, the Civic has been steady and somewhat conservative. A top-selling vehicle for Honda, it lacked a lot of pizzazz. After the standard Civic got an impressive overhaul last year, Honda continued the redesign with the addition of the hatch as well as new Type-R and SI models.

The angled front end is attractive, but the flared side panels sweep their way toward the aggressive-looking back end. Cone-shaped features flank the trunk and run underneath the uniquely-shaped tail lights. A dual exhaust gathers together to center this hatchback. Two spoilers, one at the roofline and one near the tail lights add to the aggressive vibe of the Civic.

You can’t look aggressive if you can’t at least play the part. And the Civic’s new turbocharged engine manages that. My tester was the Sport trim which adds even more horsepower. All told, the 1.5-liter turbocharged 4-cylinder makes 174 horsepower (180 with the Sport trim). There’s a manual transmission option that many Civic enthusiasts will flock to, but there’s also a continuously variable transmission. As usual I was skeptical of this CVT, but it held its own with this engine. There was very little turbo lag. My first drive experience with the Civic Hatchback, with the CVT was on the hilly streets of San Francisco and down a mountainside in the mountains of northern California. I found the CVT to be quiet, as good as most automatic transmissions. During my full week with the Civic, it handled itself well in suburban driving and on the highway too. Honda has made tremendous improvement in the overall quality of the interior of the Civic. While still maintaining a reputation as an economical car, Honda doesn’t skimp on the quality of the materials used inside or the space for passengers in the Civic. With the hatchback, there is a slightly diminished space in the back seat, especially with headroom. However, you gain a lot of that back in cargo room as the Civic hatch has 25.6 cubic feet of space. The Sport trim loses a little of that space with only 22.7 cubic feet of cargo room.

The infotainment is aesthetically pleasing with an attractive and bright 7-inch touchscreen. Though the system itself is not overly intuitive nor cutting edge, it does an ample job of connecting smart phones through Apple CarPlay and Android Auto. The touchscreen is responsive and the organization of it within the center console is all pretty attractive. When it comes to technology, it’s middle of the pack. I’d give it a higher rating if there were any knobs on the system, instead of all sliders and touch button. Note to carmakers: bring back our buttons. I should start a hashtag campaign on social media that says #BringBackOurButtons. But, I digress.

The Civic Hatchback has three trim variants including EX, EX-L, and Sport. My tester was the sport, which has a base price of $28,300. The sedan and coupe versions of the Civic have a much lower price tag, with a base trim sedan starting around $21,000. Indeed, the hatchback will have a more limited buyer audience, but certainly will still be impressed with all they get with this attractive hatchback. Heated seats, Honda’s blind spot sensing camera system, and leather upholstery are standard at this trim level.

The Civic Hatchback has an EPA rating of 30 mpg/city and 36 mpg/highway. In a week’s worth of mixed driving on and off the highway and at lower suburban speeds, I averaged about 32 mpg. The Civic is indeed a spunky, sporty fuel sipper.

The Honda Civic is a stalwart within its segment. Like many cars that have been around for decades there have been good years and bad years. As the tide ebbs and flows for the Civic, it’s riding high with the hot-looking, youth-infused hatchback. 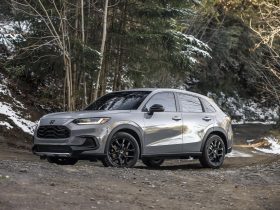