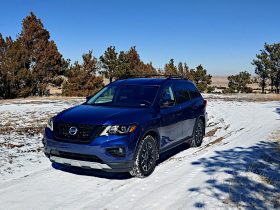 2020 Nissan Pathfinder – Capable, Roomy, and Not Too Shabby

It’s not always easy being in the middle. Just ask Jan Brady how that always worked out for her. But that’s where the GMC brand falls for General Motors. More luxurious than the Chevy bow tie, but less luxurious than Cadillac. GMC, along with Buick, often suffer identity crises because they have hard time finding their place in a crowded auto segment.

My tester this week shows that a major redesign and overhaul can help solve many identity crises. For 2018 the GMC Terrain has sculpted new looks that add identity and distinction. That’s probably the thing I appreciate the most about the GMC brand is that it’s identifiable on the road. It has a look. And despite the redesign, the Terrain still looks the part – and that’s a good thing. The most drastic difference is on the front end, where headlights take the shape of a turtle head with its mouth agape about to devour the grille. It’s a bold design, for sure, but it really works on the Terrain. Indentations on the hood add a streamlined appearance that also flows on the side swooshing toward the back. The tail lights have a similar shape as the headlights, adding continuity to this compact SUV.

My tester was GMC’s luxury trim, Denali, and with that the Terrain drastically slants toward high-end styling. Some of the Denali trim looks include a chromed-out grille, LED headlamps, chrome roof rails, and Denali-inspired door handle surrounds and mirror caps.As the Denali, the Terrain is stunning. Without the more expensive Denali option, the Terrain still nails the new design with a bold look that may or may not age well. Just as improved as the outside, is the Terrain’s powerplant. There are three different engine options including a 1.5-liter four-cylinder engine with a paltry 170 horsepower output. Then there’s a 1.6-liter turbo diesel engine that has 137 horsepower, but 240 pound/feet of torque. It’s nice to see GM still investing in diesel engines as they have their place and niche interest. My tester was the most impressive engine option, a 2.0-liter turbocharged four-cylinder. This one makes 252 horsepower and offers ample power and comes close to being exciting. So, few of today’s small SUVs offer much excitement behind the wheel, it was nice to see how well this engine does and the 9-speed automatic transmission is tremendous. With all-wheel drive, the handling is good through turns and with the Denali there’s a special comfort-oriented suspension. When it comes to interiors, GMC prides itself on quality. When the Denali trim is added, the Terrain becomes rivals to European and Japanese luxury brands. The interior of the Terrain Denali is that nice. Leather-trimmed seats are specific for the Denali trim. The seats are firm, but comfortable and are heated. The five-passenger interior boasts enough shoulder room for three adults in the back seat.

Cargo room is on the small size for this segment with 29.6 cubic feet behind the second row. Fold those seats flat and the overall cargo area expands to 63.3 cubic feet. One interesting feature that you don’t often see in other SUVs is that the front passenger seat folds down which expands overall cargo area (like lumber or furniture) to 81 cubic feet, making this a very competitive number for the Terrain.

In the Denali trim, the Terrain is loaded with technology including two USB ports, 4G LTE WIFI hotspot, and an eight-inch infotainment touchscreen with smartphone integration through Apple CarPlay and Android Auto. The Terrain’s infotainment system is intuitive and is presented very clearly with responsive touch commands.

Front-wheel drive versions of the base trim SL start under $25,000 adding a competitive price to this SUV. The FWD Denali trim jumps up significantly in price to $38,495. My tester with AWD had final price of $43,975. That huge gap in pricing makes the Terrain Denali almost its own vehicle, separate from the more affordably-priced Terrains.

EPA rating for the Terrain Denali with AWD is 21 mpg/city and 26 mpg/highway. In week’s worth of mixed driving, I averaged 23 mpg. That’s about average for this segment, but it also has that much better, more exciting engine, so I will accept this fuel economy as it also brings some exhilaration with it.

The GMC brand continues to hold its ground and also work to define itself. Redesigning vehicles in bold ways and adding luxurious trims like Denali will go a long way to keeping their product line relevant.