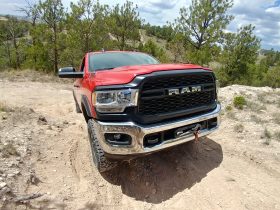 4 Reasons Why Your Pickup Needs A Winch

In honoring UM-Dearborn Mechanical Engineering Professor Taehyun Shim with the company’s first ever Ford Motor Company Innovation Fellow Award, Ed Krause made it clear this wasn’t just another run-of-the-mill recognition. The company’s Global Manager for External Alliances has worked in the university collaboration space for 19 years and overseen more than 1,900 projects. And while he says they learn something from every project, what Shim was able to achieve in his partnership with Ford happens maybe 1 percent of the time.

Those are odds that Shim says ring true to his own experience. He told us he actually worked on multiple Ford projects before hitting what Krause characterized as a “home run” helping catalyze Ford’s Pro Trailer Backup Assist. The powerful technology, as the name suggests, takes the guesswork out of one of driving’s most counterintuitive tasks: backing up a trailer. Without technological help, drivers have to be skilled in a mix of steering and countersteering to get a trailer in just the right spot. With the exclusive Ford feature, you input your trailer’s dimensions one time (the library can hold measurements for multiple trailers). Then, when you’re ready, you simply put the vehicle in reverse, push a button, modulate the gas pedal, turn a control knob in the direction you want the trailer to go, and the truck does all the complicated steering for you.

Shim’s contribution was creating the original control algorithms for the assistive technology, and when he first began work on the project, he says it wasn’t obvious it was going to be something that’s now deployed in hundreds of thousands of vehicles.

“In our first year, our meetings would typically be once a month and it would be with a very small group of four or so people,” Shim remembers. “But then, they implemented our control logic in their prototype car — and it worked. It was very exciting. Suddenly our meetings had a lot more people in them. Achievements like this are never done without teamwork, and the synergy between our research group and Ford’s principal investigators was incredible.”

Shim said application-driven research like this has been a critical part of his career. His many collaborations with Ford and other automotive companies has given him key funding lifelines to advance his work. They’ve also paid off big for his student research assistants, who’ve advanced into meaningful careers both in industry and academia.

He’s happy to see application-driven partnerships are on the rise at UM-Dearborn. In fact, Krause says there are 18 proposals from UM-Dearborn in this year’s Ford-U-M Innovation Alliance alone. That’s the highest number and percentage ever for the university.

“This is an extraordinary project, and not every project is going to be as big as this one,” Krause says. “But as big as Ford is, anything that’s successful is a big success compared to the cost of the project. And the power of those successes is that they justify funding for additional work. It has to happen that way to generate continuous innovation.”