Don’t look now, but there’s another emerging segment in the auto industry that’s getting super competitive. Everyone knows that full-size pickup trucks dominate the market and are the darlings of automakers. But compact trucks are back in style with more entries into the segment. Ford relaunched the Ranger. Jeep has a smallish pickup truck that just won North American Truck of the Year. But my tester this week has been around for a long time.

In fact, when other automakers abandoned this segment (only to re-enter it), the Toyota Tacoma has remained a stalwart amongst the small truck competition. Toyota seems to have found a recipe for success. They play it safe and offer what consumers want without going overboard. Additionally, they have found a niche in this segment with their off-road TRD trim. 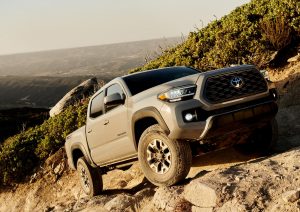 My tester came as the off-road ready TRD trim, which is the incredibly popular trim for Toyota truck enthusiasts. Who says that mudding, and traversing rough terrain is exclusive for the bigger trucks or the Jeep Gladiator? The Tacoma TRD can definitely play in the sandbox with the big boys. While I did not take it off roading this time around I have climbed down a mountain trail in a TRD before and have seen it climb out of sand up to the wheel well before. So believe me when I say, the Tacoma TRD is a major player for those who like to take trucks off the beaten path.

There are two versions of the Tacoma TRD, Sport and Off-Road. My tester was the more rugged Off-Road which, as the name implies, is well-equipped to handle itself over any terrain (more so than the Sport trim). Even the looks show off with a black front fend and chrome-accented rear bumper. There’s a black matte element over the wheel wells to protect it from rocky terrain. So on appearance alone, the Tacoma TRD Off-Road looks the part.

From a performance standpoint the Tacoma TRD has a 3.5-liter V6 engine that makes 278 horsepower and 265 lb./ft. of torque. A six-speed automatic transmission does its job, although it feels dated and holds back some of the performance. All in all, from a performance standpoint, at least on the highways and byways, the Tacoma TRD is underwhelming. Perhaps the things that I didn’t like would work better in a rougher terrain. With 16-inch wheels and Bilstein shocks it would perform well on even ground, but on regular pavement the ride was stiff and rough. It also drove really big. But that seems to be a trend in the compact truck segment as these trucks get bigger. 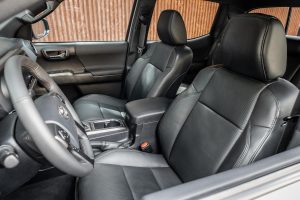 The interior feels less utilitarian and has a broader appeal. The back seat is comfortable with leg room and shoulder room. While it’s certainly smaller than the Tundra, it doesn’t feel that much smaller. There are some key updates to the interior this year including the addition of Apple CarPlay and Android Auto as well as bigger touchscreen. Toyota’s Entune infotainment system is intuitive. It’s not the most cutting edge, but covers all the bases and has a good combination of knobs and touch commands. The organization of the center stack is not overwhelming or confusing either.

Cloth seats are standard, but my tester had had the TRD Premium package which upgraded to leather seats, moonroof and a heated front seats. This was a $4,285 add on that to me sees unnecessary. I’ve seen the cloth seats in the Tacoma and they’re nice and seem to fit the off-road personality well. But I do like creature comforts, especially in trucks.

Base price for my tester was $38,965 and was well appointed as such. With the aforementioned Premium package along with safety features like blind spot monitors, traffic alert, rear parking sensor and multi-terrain monitor, my tester had a final price tag of $47,364.

The four-wheel drive Tacoma TRD Off-Road has an EPA rating of 18 mpg/city and 22 mpg/highway. In a week’s worth of pretty tame suburban driving, I averaged just over 20 mpg.

I do apologize to you my loyal readers for not putting this truck through the ringer by going over creek beds and off the road. Perhaps next time, I can really let it loose on someone’s farm. But driving in yards and kicking up mud is frowned upon here in suburbia. But it’s nice to know the Tacoma TRD is ready to do just that at any time.