In restaurant lingo, 86 means to be out of something. It’s a fitting moniker for Toyota’s cheapest sports car, which is on the verge of exiting production, and whose mostly identical Subaru twin the BRZ is already in the dirt. After it goes, Toyota’s cheapest real sports car (sorry, but the Avalon TRD and Camry TRD don’t quite cut it) will be the GR Supra 2.0, which costs almost $17,000 more than a starter 86. Haste makes waste, you may think, as you prepare to order one, but hold off for a second—the entry-level sports car market has changed a lot since the 86 was new, and there may be a more compelling alternative in the not-at-all distant future.

Named for a scenic mountain road in Japan, the 86 Hakone Edition is a spruced-up, spruce-green sports car with 17-inch bronze wheels an a wild rear wing that’d look out of place against a brighter color. Inside is a black-and-tan affair of Alcantara and leather, which are tightly bound together with beige stitching. Tech-wise, it’s got power mirrors, LED headlamps, and LED fogs outside, and within dual-zone automatic HVAC, heated seats, a smart key, and push-button start. It’s not quite as bountifully equipped as that Honda Civic Si I drove March, but it’s definitely not skimping out. 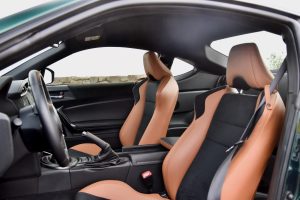 Originally released while I was still in high school, and facelifted before the last election, the 86’s design is a little old, but no worse for it. Not up front, anyway. That back end’s boneless haunches, conspicuously polygonal lights in the lower valence, and stubby rear overhang—which houses a trunk smaller than some beer coolers—has never really sat right with me. And while the interior looks and feels sturdy, with build quality and finish you’d expect of a premium Toyota, the generous use of Alcantara means the interior looks dirty even when it isn’t. Sure, it’s grippy stuff, and helps hold passengers in place with the aid of aggressive seat bolstering, but as “premium” touches go, it always looks low-rent.

As for those seats, they’re heated, and comfortable for how little adjustment they offer, but not especially so—lumbar support is lacking, especially for a car with a ride on the stiff side. Under no circumstances will anyone larger than the median American male be comfortable in the back seat, and if you stuff someone big back there anyway, they’ll make whoever’s up front claustrophobic too. They won’t have much of an infotainment system to distract them, either; it’s a smaller, older, less responsive system, one linked an audio setup that falls short of name-brand wireless earbuds that shall not be named. It’s gotta be cranked up a bit too if you wanna overcome the breathy HVAC and not insignificant road noise.

Going light on sound deadening, however, is part of how Toyota achieves the 86’s svelte curb weight of 2,800 pounds, which slack-free controls embolden you to toss around. The steering is quick and precise, and the brakes are typical Toyota: progressive, responsive, and predictable, not to mention spaced almost perfectly for heel-toe. Owing to a notchy transmission and a grabby clutch, gear changes can be hard to execute smoothly, though if there’s one real flaw with the 86’s controls, it has to be with the accelerator. More specifically, what it’s attached to.

Even with gearing shorter than an internet commenter’s temper, that two-liter, Subaru-sourced “boxer” engine shows little motivation below 2,500 rpm or above first gear. Its disappointing torque could be forgiven if it made a noise nicer than a generic four-cylinder hum, but it doesn’t. At least it redeems itself in part by being thrifty, averaging over 35 mpg highway when driven sensibly.

When the 86 launched in 2012, Toyota had only the porky third-gen Mazda Miata as an earnest competitor. Today, said Mazda’s successor is a compelling, soft-top alternative to the 86, one that comes in a few grand cheaper, if at the cost of still more practicality. But if spaciousness is a must, both the Ford Mustang Ecoboost and Kia Stinger GT-Line have the Toyota beaten both on that front, and on power to boot. And if you’re not locked to rear-wheel drive, enough praise can’t be lavished on the Honda Civic Si, though it’s now only available as a sedan—the Civic’s superior body style in my opinion.

The 86 Hakone Edition would be more tempting if it incorporated mods from the 86 TRD, like Brembo brakes and Sachs shocks, but it doesn’t. So while it’s a pretty color, the aforementioned factory performance model should both hold more value and make you crack a bigger grin on a good road. Still more likely to generate smiles than any 86, though, is its supposed successor model, which is anticipated to break cover in a matter of months. With that car and its promise of a torquier, 2.4-liter engine so tantalizingly close, even paint as pretty as the Hakone’s may be a last call worth passing on.