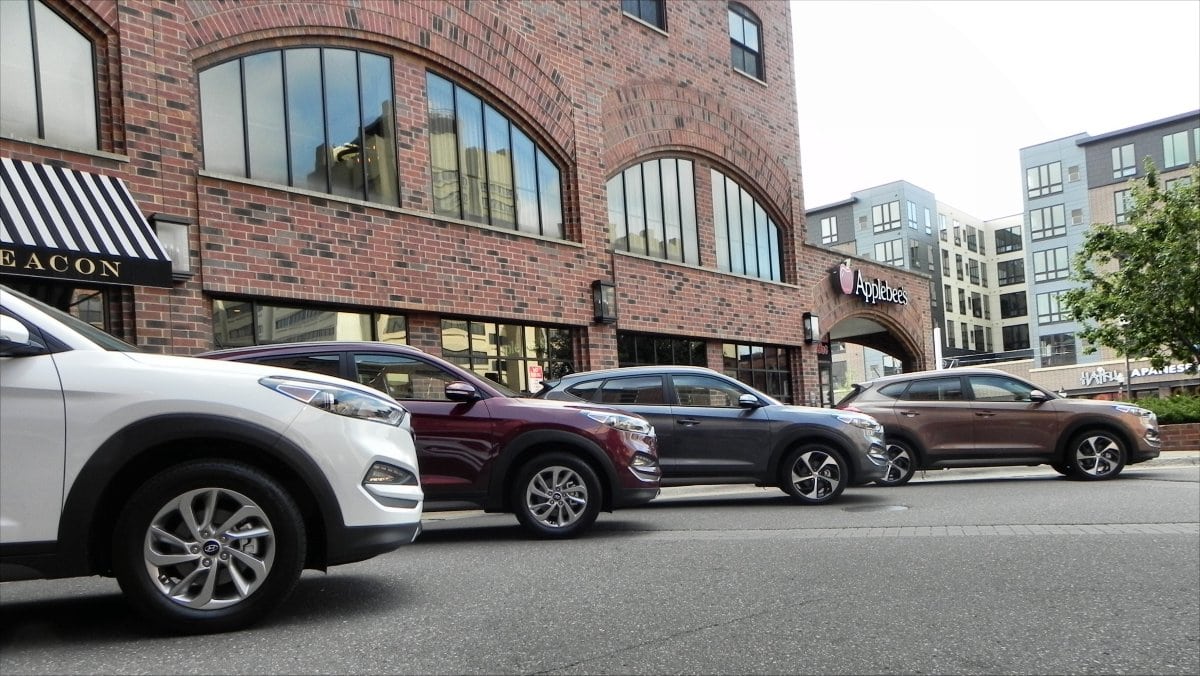 The Fiat 500 is one car that nearly everyone says should be an electric. Well, Fiat listened and now the 2013 Fiat 500e is hitting the streets with fun Italian style. The 2013 Fiat 500e is only being sold in California, at least for now, and is being built in limited quantity at that. To build this electric vehicle (EV), Fiat basically took their sporty Abarth platform with its improved suspension and sportier trim, removed the gasoline engine, transmission, fuel tank and components, and replaced them with an electric motor, batteries and a controller. With a few modifications to accommodate the new drivetrain, the 500e was ready for action.

During my test drive, I spent a lot of time talking with Brett Giem, a Fiat engineer who worked on the 500e from start to finish. We discussed the car in depth, spending as much time with the hood open and the covers off as we did behind the wheel on the road.  In that time, a lot was learned about the requirements for such a tiny vehicle to be converted from an internal combustion engine (ICE) to a battery electric vehicle (BEV). The 2013 Fiat 500e looks like any other Fiat 500 of this generation with just a few things marking it as an EV rather than a gasoline car. The “500e” badging around the vehicle is a sure giveaway, as is the absence of a shifter on the center console – this is replaced with buttons for Park, Reverse, Drive, etc. The large “charging bar” bump at the center of the dashboard lights up and blinks forward like the battery indicator on a cell phone when the car is plugged in but is otherwise dormant.

The Fiat 500e we drove had a sporty, more Abarth-like paint scheme and look to it. All 500e trims have the same badging, but there are several paint colors to choose from and some interior and exterior options that can be added to spruce the car up. Most of these are either cosmetic or add technology (audio system upgrades, seating trim, etc).

The Fiat 500, in all its forms, is one of the most-recognizable cars on the road and a favorite among many because of this uniqueness and its sporty Italian lineage.  The playful commercials and fun feel the car gives, no matter the drivetrain, are a big part of its appeal.

Very little room is lost inside in order to accommodate the 24 kWh battery pack and its thermal management system. A slight bump in the floor at foot-level in front of the back seats is the only noticeable change to the interior compared to a 2013 Fiat 500 Abarth (which was conveniently on hand for comparison). The cargo space is also noticeably smaller as well, though not horribly so. The 500e will carry a half dozen full paper grocery bags in its cargo space, or a small drink cooler, etc. with ease. Owners will obviously usually have the rear seat space free for cargo and the split-folding seats add a lot more room when laid down. For those sitting in the 500 or 500e, they’ll find that the seating is about the same. Brett and I are both large men, well over six feet and two hundred pounds each, and we were perfectly comfortable in the driver and front passenger seats in the little 500e.

The trim level is comparable to the higher level of the Abarth package, though not identical. It’s well-fitted and nicely done. Legroom and shoulder room are great, even for large people, and since the 500e is not meant to be a touring car, in which you’ll spend hours at a time, its seating is firm but supportive rather than cushy and enduring.

Several fabrics and color schemes are available for interior styling.

The 2013 Fiat 500e is held back in terms of how many electrons will flow to the motor when the pedal is mashed to the floor from a standstill. So while the response is good, it’s not overwhelming and barking the tires is very unlikely. We spent a short amount of time fiddling in the parking lot to test acceleration before hitting the road and found the car fun and responsive, but it’s definitely not a sports car.

Once on the road, the ride was smooth and unless you’re looking for it (in terms of driving feel), you’ll not really know it’s an electric car. The electric-assist power steering allows a fair amount of road feel and the accelerator, despite its physical disconnect from the road, still gives enough vibration to let you know what’s happening out there.

The ride itself, even on the highway at over 65 mph, is smooth and quiet. Very quiet for such a small car. We were told that this is because of the car’s dampening systems and the stiffer suspension tuning to allow for the slightly higher weight of the battery. An acoustic windshield finishes off the sound dampening.

The handling in the 500e is phenomenal. The 500 is already a lot of fun thanks to its tight steering, very small wheelbase, and short stature. The 500e adds a low-slung center of gravity (thanks to the batteries) and near-even weight distribution (about 47:53 front-rear) to those factors. This makes for a lively little car on surface streets during turns and maneuvering.

After our drive, Brett and I spent a lot of time discussing the 500e’s powertrain. The car has a very well-considered setup.  Looking at the photo below, in which the plastic “engine cover” has been removed, you can see the guts of the car. On the left is the controller and electronics, which tie into the thermal management system for the EV drive. Underneath that silver box is the motor itself coupled to a simple gearbox for front-wheel drive and to provide reverse gearing. At center is the 12 volt battery (a standard 12V automotive lead-acid) for the vehicle’s accessories and interior accouterments. Next to that, at right, is the vehicle’s primary engine fuse box, accessories (all electrically-driven) for air conditioning, power steering, etc., and braking system. Just to the right protected by a large metal bracket is the electronic control unit (ECU) or “brains” of the car – very much like the ECU in a standard gasoline or diesel automobile, but slightly more complicated due to the higher number of electronic components being used in the 500e.

Two reservoirs, the larger seen here at the far left (filled with purple liquid), are for the coolant that keeps the motor and controller as well as the battery itself, cool.  The battery’s thermal management is separate from the motor’s, though both use the same type of coolant. These run through twin radiators at the front of the car, placed just as the radiator on a standard ICE vehicle would be.

The whole system is designed to be “dropped in” to the engine compartment during assembly. Basically, most of what you see in the engine compartment is assembled first, then lowered into the chassis and bolted into place.  It’s a nicely-designed setup with all service points in easily reached positions for checking or topping off. Competition for the Fiat 500e includes the Nissan LEAF, the Mitsubishi i MiEV and the Ford Focus Electric. Both the LEAF and the Focus Electric are five door hatchbacks with far more versatility and about the same range while the i MiEV is roughly equivalent to the 500e in size and range. Of the three, however, only the Focus Electric competes in terms of driving dynamics.  The LEAF is sold nationally, whereas the other three (including the Fiat) are only being sold in select markets like California.

Very Fun to Drive – the 2013 Fiat 500e retains all of the fun factor and signature Fiat appeal. This is augmented by the peppy response of the electric drivetrain, though that fun Italian “pbbt pbbt” from the exhaust is gone.

Near-perfect City Car – It’s small size and stature mean it can basically go anywhere and park nearly anywhere in an urban environment. Its universal charge plug and highly visible charging bar on the dashboard mean that even from a distance or through a restaurant window, you can see the state of your 500e’s charge as it stores electrons.

Only Being Sold in California – For now, the 2013 500e is a compliance car, being sold just in California. Although Fiat says they will be selling it elsewhere, eventually, most automakers promise this and rarely follow through.

No Cabriolet Option – Easily the most desirable 500 is the 500 Cabriolet with its rollback roof that just begs you to go out and have fun. Sadly, the electric 500e does not have this as an option, but we were told that it’s “definitely in the works.”

Overall, the 2013 Fiat 500e is a fun and impressive little car. Like most electrics, or any other vehicle type for that matter, it isn’t perfect for everyone. For the market it’s aiming for, though, it’s a near-perfect fit. It is dynamic, well-outfitted, and the perfect urban commuter or city car. With an EPA estimated range of about 87 miles per charge and a realistic range of 100 or more, it’s definitely got enough to do what an EV city car is for – getting around quietly and efficiently. It adds to that the fun of the 500 platform and the Italian style with Fiat cred.

A great first-generation EV from Fiat.

Test Period Length and Limitations
Test period included two introductions to the car, the first, late last year, did not include a drive. The second included a short drive totaling about 30 miles on mixed highway and surface roads, though not in an urban environment. Total time in the car was about forty minutes plus about that same amount of time discussing the car’s drivetrain and components with Fiat engineer Brett Giem.

*List prices are before any government or manufacturer incentives.