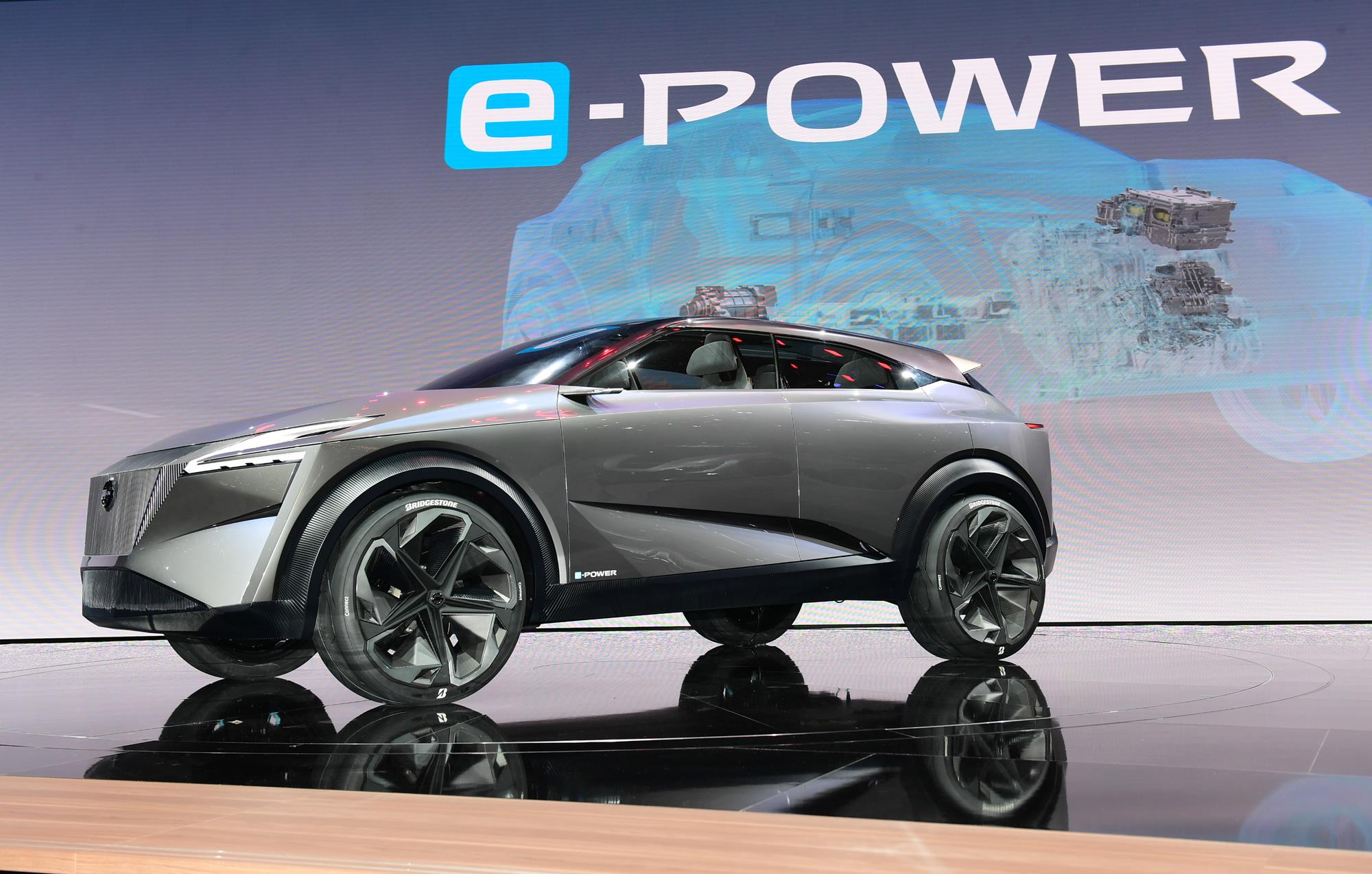 The new BMW 4 Series Convertible will make its world debut and the BMW i8, BMW 5 Series Gran Turismo and BMW Concept X4 will make their North American auto show debuts at the 2013 Los Angeles International Auto Show on Wednesday, November 20th at the BMW Stand at 9:00 a.m. – 9:25 a.m. PST at the Los Angeles Convention Center (1201 South Figueroa Street) in Los Angeles. English and Spanish speaking BMW representatives will be available for interviews throughout the day. In addition, BMW will feature the all-electric BMW i3, BMW X5, BMW 4 Series Coupe, BMW 5 Series Sedan, and the North American debut of the BMW K 1600 GTL Exclusive. The new BMW i8 is the world’s first plug-in hybrid 2+2 super-car from BMW Group. Itwill join BMW i’s growing lineup of visionary vehicles which are purpose built from the ground up as electric and hybrid electric and constructed primarily from lightweight carbon fiber. Coming to the market in 2014 Q2 and priced at $135,700, the BMW i8 features an athletic design and a sleek, low slung exterior and operates with extremely low fuel consumption (94 mpg) and emissions output. It is capable of accelerating from 0 to 60 mph in 4.4 seconds on the way to an electronically governed top speed of 155 mph. A fascinating combination of BMW X robustness and BMW Coupe sportiness, the muscular and broad-shouldered BMW Concept X4 ispoised to continue the success story of the BMW X6 in a new vehicle class. The BMW X4 Concept has eye-catching proportions, tight contours and numerous high-quality details, producing an unrivalled product character brimming with emotional appeal and sturdiness. In hallmark BMW style, a longer wheelbase, relatively long bonnet, short overhangs and a set-back greenhouse lend the car an undeniable dynamism even when standing still. Available in 2014, the BMW Concept X4 will be produced at BMW Plant Spartanburg in South Carolina, USA. The BMW i3 is the first fully electric vehicle from BMW Group under BMW i’s growing lineup of visionary concept vehicles constructed from the ground up primarily from lightweight carbon fiber. With 170 horsepower and 184 lb-ft of torque hybrid-synchronous electric motor, the BMW i3 is electrified by a 22-kWh lithium-ion battery, good for 80-100 miles of emission-free driving. The BMW i3 will offer interior space comparable to the legendary BMW 3 Series on a shorter overall body. Its 32.3-foot turning circle and a relatively long wheelbase make it agile and engaging to drive, yet ideally suited to driving in dense urban areas. Available in 2014 Q2, the BMW i3 will have a base MSRP of $41,350 and the range-extender model will have a starting MSRP of $45,200. A new addition to showrooms, the BMW 4 Series Coupe adds a new dimension to the qualities of the BMW 3 Series Coupe in terms of aesthetics, dynamics and unbeatable driving pleasure. Built on the tradition of the larger BMW 6 Series and BMW 8 Series Coupes, and with a slightly longer wheelbase, wider stance and considerably lower roofline than the BMW 3 Series Coupe, the “4” creates a strong, athletic silhouette which exudes power even while stationary. New aluminum trim on functional elements such as air intakes and vents, door openers and exterior mirrors add elegance to the design. The BMW Series 428i Coupe has a starting MSRP of $40,500, 428i xDrive Coupe for $42,500, 435i Coupe for $46,000 and 435i xDrive Coupe for $48,000.

Offering notable advances over its predecessor, the new BMW X5 sets new standards in powerful design, luxurious spaciousness, cutting-edge versatility and efficient driving pleasure. The X5 reveals an elegantly stretched silhouette, eye-catching swag line over the athletically molded wheel arches, horizontal lines and taut surfaces at the rear. With lower fuel consumption and emissions through weight minimization, optimized air guidance and engine technology, the X5 is the only vehicle in its segment available with Active Steering and AdaptiveDrive, providing greater handling capability and ride quality. The newly available rear-wheel drive 2014 X5 sDrive35i will start at $53,725 and the 2014 BMW X5 xDrive35i is priced at $56,025. The 2014 BMW X5 xDrive35d price is $57,525 and the 2014 BMW X5 xDrive50i will start at $69,125. The gas variants are on sale now and diesel vehicles will be available in 2014 Q1. The BMW X5 is produced at BMW Plant Spartanburg in South Carolina, USA. The slate of BMW Approved Apps will expand with the integration of the Amazon Cloud Player. The new app integration will give BMW users access to their entire music library from the web, mobile device, connected living room device (like Roku, Samsung TV and Sonos) and now from their BMW. Details and demonstrations will be available during press days.

BMW i also brings together a wide range of innovative products and services that make electric driving a comfortable and pleasing experience with 360° ELECTRIC – from simple home charging to a continually expanding network of public charging stations. Other benefits include fully connected navigation and the option of using conventional cars for vacation trips with BMW Add-on Mobility. BMW will make an exclusive announcement about 360° ELECTRIC before the Los Angeles Auto Show and BMW as well as partner experts will be on hand at the BMW i Pavilion of the BMW i3 test drive event (at the Staples Lot 6 on the corner of Figueroa Street and 12th Street) to provide more details about the program.

In conjunction with the Los Angeles International Auto Show, some of the first test drives of the BMW i3 will take place on Wednesday, November 20 and Thursday, November 21 at the BMW Pavilion at the Staples Lot 6 on the corner of Figueroa Street and 12th Street. The BMW i Pavilion will be open to media on November 20 from 10:00 a.m. – 4:30 p.m. on November 21 from 9:00am – 2:00pm. To register a time to take a test drive of a BMW i3 vehicle, visit www.bmwi3testdriveslaias.com. Reservations are strongly encouraged.

Earning Green Car Journal’s “Green Car Product of Excellence,” the BMW 328d is also a finalist for the magazine’s Green Car of the Year award, which will be revealed at the Auto Show on Thursday, November 21 at 9:00 a.m.

BMW will also be partaking in the 10th Anniversary of Design Los Angeles’ Auto Show Design Challenge. The top automotive design studios from around the world are invited to participate in the Challenge and this year’s topic is “Biomimicry & Mobility 2025: Nature’s Answer to Human Mobility,” with the challenge of designing a vehicle experience that uses Biomimicry to increase mobility. BMW will showcase two entries in the Design LA Gallery during the Press Days and the winner will be selected on Thursday, November 21.

In addition, Dirk Rossberg, Head of BMW Crew Technology Office of USA, will participate in a panel discussion on “The Future of Transportation through Technology” at the Connected Car Expo at the Los Angeles International Auto Show on Tuesday, November 19 at 2:45 p.m. Leading futurists will give their vision of how automobiles will change and how technology is set to transform transportation in the future.

BMW is also offering a media trip to BMW Group DesignWorksUSA in Thousand Oaks on November 21, 2013, from 9:00 a.m. to 12:00 p.m. Laurenz Schaffer, President, DesignworksUSA, will give an exclusive overview of the BMW Group’s California-based studio and their consulting work with other clients as well as for the BMW Group. Furthermore, we will present the BMW designed Bobsled, Singapur Airlines First Class Cabin and the BMW Individual Consulting Program. Please contact us to reserve a spot for you.