Sometimes it feels like the Lexus brand can’t catch a break. They’re criticized for being too stodgy and conservative and being “glorified Toyotas”. Then when they shake things up, the design is too bold and garish. So, let’s take a deep breath and look at the 2019 Lexus ES 350, a car I drove this week. Is it stodgy? Not really, that’s only if you consider a comfortable, luxurious, simple interior to be stodgy. Is it garish? Well the redesign of the exterior does feature a bold grille with some big design elements. Perhaps it’s not for everyone, but I like it. 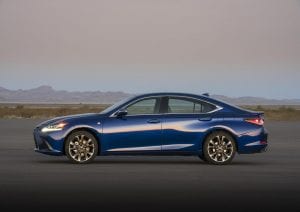 The angular front end features an hour-glass shaped grille with sharp lines around the LED head lights and chiseled design elements all pointing toward the grille. It’s bold. I give the design team at Lexus credit for going for it. It’s certainly not conservative looking. Will the design of the new ES hold up over time? Hard to say, but it certainly stands out from the crowd and is definitely not a “glorified Toyota”. My only issue with the overall look of the ES is the back end doesn’t seem to match the front end. It’s like two totally different looks. So, the lack of congruency is off putting to me.

The biggest improvement is in the powertrain and performance. There’s still the 3.5-liter V6 engine that powered the previous generation ES, but now this one has increased horsepower with 302 hp and a much quicker, more exciting performance. The ES 350 F-Sport is spry and agile and even exciting. I couldn’t have said that about the previous version of this sedan. The eight-speed automatic transmission is also excellent and replaces a dull, unresponsive six-speed. 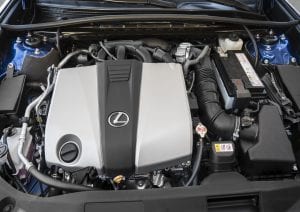 With the F Sport set up, the ES becomes even more exciting. Although it’s still not overly aggressive, but shakes off the previous stodgy reputation and becomes reasonably exciting with even a bit of a growl. The F Sport suspension has a sporty feel for those who don’t like the regular dull response of the Lexus suspension system. 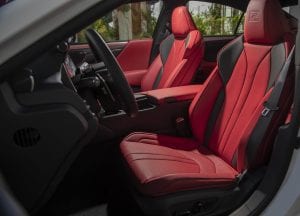 The nicest feature with any Lexus vehicle is the steady consistency of their interiors. They never disappoint. And this new 2019 ES holds up to that with a quiet, comfortable and luxurious enough interior. It’s still somewhat conservative with the interior set up and can’t rival the more bold and garish interiors of its European counterparts, but the 2019 Lexus ES 350 F Sport has plenty of quality touch points and creature comforts. The F Sport’s heated and cooled leather seats are nice.

The integration of Apple CarPlay and Android Auto overcomes some of the infotainment system’s flaws. Although the mouse-like control pad continues to be cumbersome and awkward. Lexus will be well served when they finally discontinue this part of their infotainment system once and for all. The 12.3-inch display is brilliant and part of a nice center stack.

The EPA rating for the ES 350 F Sport is 22 mpg/city and 31 mpg/highway. Even with some heavy-footed driving, I averaged just over 26 mpg in a week’s worth of driving.

Starting price of the ES 350 F Sport is $44,135, which makes it incredibly competitive in the luxury segment. My tester, with several options and upgrades had a final MSRP of $54,450.

Cars, like all things, are subjective. I know this as well as anyone. Will I remember this ES 350 F Sport over the years? Probably not? When I look back on the week I spent with it, will I think highly of it? Absolutely. That’s what this sedan is all about. The redesigned luxury sedan breathes new life into this segment and reinvigorates the market, for good or bad.