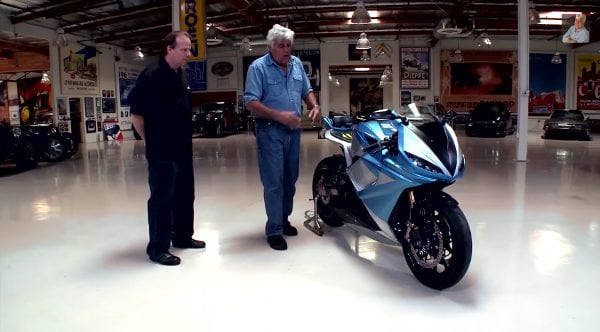 I caught up with Richard Hatfield at Lightning Motorcycle before and after their incredible win at the 2013 Pikes Peak International Hill Climb (PPIHC ) race.  The weekend was epic in many ways and the electric motorcycle Lightning won a race against the best gasoline motorcycles.

To say that Pikes Peak 2013 was unique is an understatement. Lightning Motorcycle manages to snatch pole position and a win in its category against gasoline motorcycles by almost 21 seconds. The fastest of the 82 motorcycle entered, it beat all but eight of the fastest cars at PPIHC.  What also makes the Lightning SuperBike very special and unique is that it was powered by clean, renewable solar energy. Here is my conversation with Richard.

Nicolas Zart – Richard, tell us a little about this incredible win.

Richard Hatfield– It was great. The Lightning team and its sponsors did an incredible job bringing is all to its culmination of a goal we set ourselves fours years ago, to compete head to toe against the best gasoline powered vehicles in the world.

NZ – Why is Pikes Peak so important in your eyes, and what does it mean for EVs in general?

RH – It’s a great event for electric motorcycles. It’s the second longest running motorsport behind Indianapolis. There are great teams competing there. Peugeot spent multiple millions of dollars, as well as Toyota, Mitsubishi, and Yokohama. It’s almost like Bonneville. It’s open to out of the box thinking and innovation. If you look at the Peugeot 208 Ti16, it’s a distillation of their effort at Le Mans and other races. There were able to take their best engineers and best car, and put it together in new ways tailored for Pikes Peak.

As a platform for innovation and a launching pad for innovation, it is a special race. The fact we are running at high altitude, with 156 corners where we can use our power and torque early out of corners, it’s not too long where we can use our current battery technology, it all plays in our court. At the same time, it is a level playing field where gasoline engines put their best foot forward, as we do. So we can let the chips fall as they will.

NZ – We talked about how electric vehicles (EV) are achieving in one year what used to take conventional gasoline technology ten. Can you comment on that?

RH – We have the advantage to build on what the racing has achieved before, brakes, suspensions, computing. We are seeing a Moore’s law progress with computing with electric vehicles that is getting better every year.

RH – There is a lot of technology in common with computers. There are microprocessors managing batteries, controllers, interfacing between batteries and controllers. We’ll see more technology interacting with traction control. Technology will play an important part of it.

NZ – In EV racing, traction controller and other computerized systems help. Does it stand in the way of racing?

RH – In any subject, you will have a lot of resistance. Some people will have a strong affinity with petroleum engine revving at 16,000 but this (EV racing) is the natural progression.

NZ – How do you see the near future of racing in terms of the electric drive?

RH – I see EVs in its infancy. We’re in the 1900s of the gasoline history. The power density of motors, we have just scratched the surface. The batteries are twenty per cent better this year. We are going see weight going down, power going up and suspension getting better. There will be larger and better funded groups getting involved. It’s a very exciting time to be involved with.

NZ –  The other thing I’ve noticed is that EV race drivers tend to be more seasoned veterans in the race world. Do you see a time when the new generation of race drivers will go first to EVs?

RH – I think so. That’s a progression that will move forward as well. Earlier with Dunne (Lightning’s race rider), riders like them know the track and are very experience, like Greg Tracy. It’s a little bit more difficult with a new player to explain the course and all. A great rider will make a great bike that much better. We’ve had a number of distractors saying we have Dunne on our bike. He’s a great rider, implying he could have won the race on a ten speed. Look at the time we put and you will see he qualified faster then he did on his gasoline bike last year. Having a great rider is important but it doesn’t take away you have to give them a great machine to ride on.

NZ – What are your plans for next year?

RH – For Lightning the most important race to win for us is the race to the market place. We have other competitors selling bikes and we chose to race first. We wanted to make sure the electric bikes we bring out are the best and we will continue to compete and refine our bikes. We’re looking out how to make our company build sustainable transportation, by becoming profitable and bringing products into the market.

Richard told me his ideal spot in terms of the four wheel world would be to be a Ferrari meets Tesla Motors. I see Lightning Motorcycle fitting perfectly there. Lightning will bring out to the market a slightly road modified street electric motorcycle that is 95% what the race bike is. Lightning has certainly take the world by surprise this year by winning the two wheel electric category at the 2013 Pikes Peak edition, we look forward seeing them again next year.