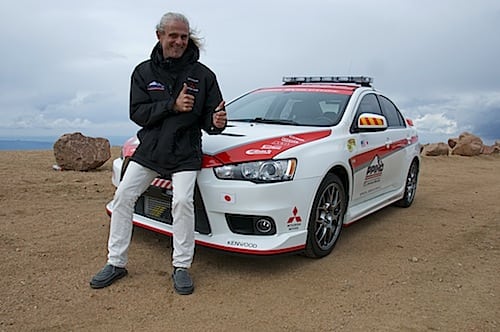 CarNewsCafe got behind the wheel of one of the Mitsubishi Lancer Evolution Safety Vehicles at Pikes Peak.  Find out what it feels to drive this modified car from start to finish.

Why is the electric car guy writing about a souped up gasoline car?  Bear with me and read between the lines.  I got behind the wheel of the Mitsubishi Lancer Evolution, one of the three Safety Vehicles at Pikes Peak.  The cars were slightly modified and the Lancer Evolution pushed out roughly 350 HP.  I needed as much climbing to the summit – all 14,400 ft.

Mitsubishi Lancer Evolution 2014.  In the world of souped up cars, two contenders have enjoyed a faithful following, Mitsubishi and Subaru.  I remember seeing both of these cars as a kid fighting in rallies on my old stomping ground, the south of France.  If until now I felt Subaru had a better chassis, my latest test drive with the Mitsubishi Lancer Evolution 2014 convinced me otherwise.  Obviously with my electric car background, one of the first questions I had was when would we see an electric motor to help this car consume less and offer even better performance.  You will be amazed at what the next generations could offer.

The Drive.  You’ll hear on the videos that the car sounds right.  It has that typical grunt you expect from such a vehicle.  My first experience was in the passenger seat, which communicates much of the road condition.  I felt the chassis was too harsh.  When I switched to the driver’s seat, my impression completely changed.  This car is alive.  This is what Mitsubishi does well.  The Lancer Evolution is a passion product and it bodes well for the future of the electric drive.  The Lancer Evolution wraps itself tightly from curves to hairpins, never once making you feel you are out of control.

The first few twists and spins on the Pikes Peak route ware easy and perfect to get you acclimated to the car, which, by the way, takes very little time.  Everything falls into hand reach and the Recaro seats hold you perfectly well.  The paddle shifts are where you would expect them, in line with the on-the-column paddle shifting school of thought.

Handling.  The chassis is one of the best any car maker in this category has to offer.  It impressed me in many ways by giving enough data on road condition.  If the Subaru feels more civilized, the Mitsubishi is closer to an Italian stallion.  It is alive, it kicks and screams but never leaves you in unsafe situations.  The chassis gives you plenty of warning of how far you are nearing the car’s limits — and yours.  I desperately tried to fault the car coming out of hairpins quickly or applying the copious power too early.  No matter what I did, the traction control came in and gently rectified the course.  What I liked best is what happens before.  As you put the car in a position to loose traction, it gives you plenty of information, starting with gentle careful to full out: “You are near the limits, Buddy!”  Once at the limit, traction control kicks in an unobtrusive way most drivers will enjoy.

The Grunt, The Turbo Kick.  Let’s face it, gasoline cars have to rely on turbos and superchargers to give us the same kick in the pants the electric motor delivers.  In this instance, the Mitsubishi Lancer Evolution delivers the turbo kick in a fun way.  What took getting used to was coasting off the turbo kick.  Slowing down the car, you could feel the turbo disengaging, which was a fun sensation.  You are definitely driving a spirited and passionate car here.

Sorry for the terrible audio quality, our recording equipment failed, but hope this drives the point across.