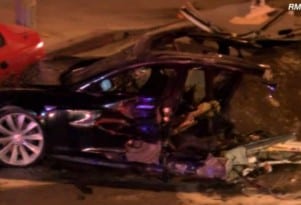 News reports say that overnight, a Tesla Model S was stolen from a showroom in the Hollywood, California area and involved in a high speed pursuit by police. The car eventually hit other vehicles, was split in half by a traffic light pole, and managed to both land on top of another car and wedge itself into the wall of a building. Then, as if written for a movie script, the Model S caught on fire.

Emergency response found several injuries, including one possible near-fatality and two police officers, plus scattered debris at the scene. According to NBC Los Angeles, the car thief is in critical condition. The Jaws of Life were used to extract people from what appears to be a Honda Accord on which half of the Model S was perched. The other half of the Model S? Wedged into a synagogue nearby.

This, of course, would not likely be news here on CarNewsCafe were it not that a Tesla was involved. Any other vehicle and it would have just been yet another stupid joy ride gone bad in Hollywood. The number of things involved here, however, make it so nearly-satirical that were it not for the injuries to innocent parties at the scene, it would be laughable.

“I have never seen half of a car wedged into a building before,” said Sheriff’s Lt. Michael White to NBC. Witnesses say that the amount of smoke and small explosions made it like a truckload of fireworks was burning and kept many from being able to run in to help the injured.

It’s a testament to both the Internet at large and the general stupidity of most would-be thieves all in one go. The Internet loves stories involving memes, which Tesla Motors basically banks its marketing upon; and the thieves who are too stupid to run for office usually end up causing injury to others as a result of their actions. That this story also took place in Hollywood is just icing on an otherwise dismal cake.

3 thoughts on “Stolen Tesla Model S crashes, splits in half, and burns in Hollywood”