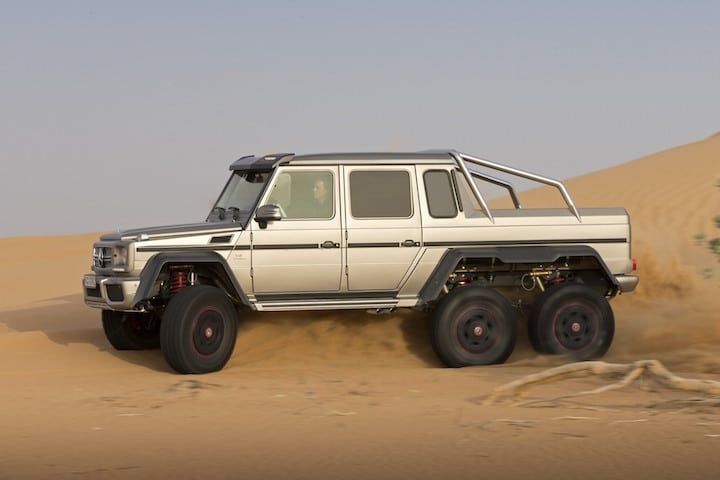 Mercedes-Benz is behind the totally awesome Unimog, one of my dream vehicles. How do you one-up a serious offroad mega truck like that? Easy. Add another axle and throw on the AMG label for effect. The result is the AMG G63 6×6 a, you guessed it, three-axle monster of luxurious offroad awesomeness.

The Mercedes-Benz AMG G63 was introduced in 2013 (read about it here) and wowed just about everybody with its bold badassery. The truck has an extra set of everything. There are six wheels on three axles, five differentials (count ’em.. FIVE), and ground clearance to rival even your redneck cousin’s monster truck lift. The powerhouse under its hood produces 536 horsepower with its twin-turbo V8 sucking down 5.5 liters at a whop.

The price tag? Just as outlandish as the killer machine it’s attached to: about $430,000 American, give or take. The aftermarket is steep, though, with one recently selling in Florida for a cool million dollars even. Why the doubling in price? Simple. Mercedes said they were only making 100 of these bad boys and those 100 units are already sold.

Makes you wonder what the ROI on this monster was or if Merc-B just did it to get the headlines.

Fret not, though! If you’re a Mercedes lover that wants their version of a Jeep-Raptor mashup, it looks like the G 500 4×4-squared is a likely production model, coming soon.

Ya, you can basically add that to my #want file.