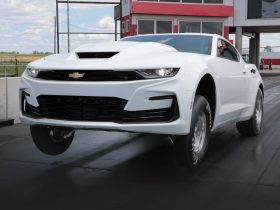 Much Anticipated 2016 Tacoma Is Shockingly Similar to 1986 Pickup

Comparing Toyota’s new 2016 Tacoma to a 1986 Toyota Pickup illustrates just how little Toyota’s small trucks have changed over the last 30 years. While the new Tacoma is vastly superior to the 1986 model in terms of fuel economy and overall safety, it’s shockingly similar to the old truck in terms of capabilities.

A quick comparison chart shows that the 1986 Toyota Pickup SR5 nearly equals the 2016 model in terms of payload capacity, and precisely equals the 2016 model in terms of tow capacity (both trucks are rated at 3500lbs tow capacity with a 4-cylinder engine). The 2016 does distinguish itself by offering better fuel economy, more overall power, and better safety systems, but the 2016 is also about 20% more costly than the 1986 model when prices are adjusted for inflation.

“You can’t put a price on safety and comfort, and you can’t ignore fuel costs,” says Jason Lancaster of Spork Marketing, the company that created the comparison chart. “Some might say the 2016 Tacoma hasn’t evolved much over the last 30 years, but there’s a lot the stats don’t tell you,” says Lancaster.

Comparing crash test data from the 2016 Tacoma to the 1986 Toyota Pickup isn’t possible, as the testing standards have changed over 30 years. However, an official crash test report for a 35mph crash test conducted on a 1987 Toyota Pickup (available here) reads, “The driver ATD’s (Anthropomorphic Test Device, aka crash test dummy) head hit the steering wheel rim and the center hub. The driver’s left and right knees hit the dash panel. The driver ATD had a HIC (head injury criterion) value of 1184.” For reference, a HIC value of 1,000 indicates about a 20% chance of a severe head injury. That’s substantially more risk of injury than a 2016 model.

“Toyota’s little trucks haven’t changed much over the years,” offers Lancaster, “but maybe that’s because those old 80s era Toyota trucks were great.”

Considering the popularity of the newer Tacomas, this comparison could prove that there’s no need to change a proven design. Check out the comparison graphic to see the 30 year old formula for Toyota pickups.