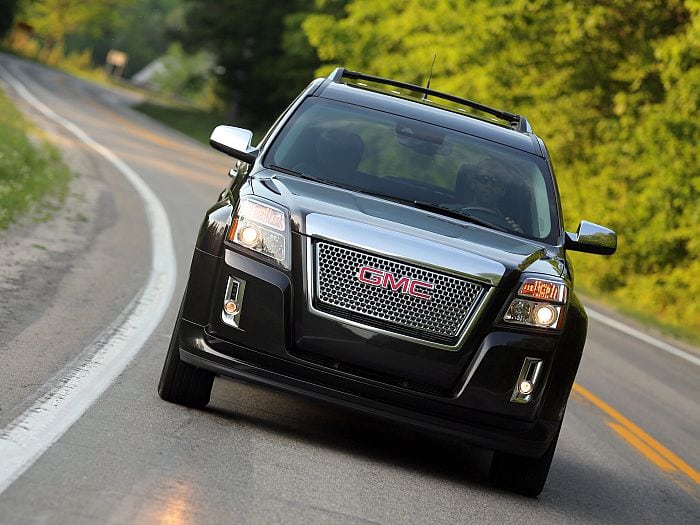 The 2015 Lexus RC F is an all-new model from Toyota’s luxury brand that aims for the rear-drive sports coupe segment. Aimed squarely at similar offerings from BMW and Mercedes-Benz, the Lexus RC F is competitive, though Lexus fans may note a few things.

When Lexus discontinued the IS F model (driven last year), sports car fans were a little disappointed. That car was a fine example of what Lexus could do when they set their mind to it, though it had its quirks as well. We enjoyed the car’s style and speed, but weren’t big fans of its noisy nature and cramped interior.

Late last year, Lexus launched the 2015 RC F as a replacement and the formula is much the same. It’s a small sports coupe with a lot of emphasis on exterior styling and putting a big, throaty V8 under the hood to power the rear wheels. So far so good. Once we saw the RC F in person, that was amended to “so far, so excellent!”

It’s a marvelously beautiful vehicle, but like all great beauties, it has flaws that accentuate those high points. Unlike the IS F before it, the RC F makes no bones about its purpose. The design of the RC F verges on being too busy, but doesn’t quite get there, standing right on the edge of the line, dazzling the onlooker from every angle without going beyond good taste.

The RC F is, at its core, a saloon-style sports coupe with a long, rounded nose and small, fast cabin that truncates in a fastback rear. The front fascia is dominated by a large, round-nosed grille of black mesh in the Lexus style atop which the sharply rounded hood begins its upward flow to a vent slit accented by two lines along either edge. This follows almost flatly to the deeply canted windscreen.

That long hood sits atop strong fenders that boldly flash three distinct lines. One is on the hood itself, though it’s the line that creates the separation for the eye between the hood and the fender in a deep, near-vertical edge. Below that, along the top edge of the fender is another line, this one mirroring the first with a slightly shallower edge. Below that is a thin, almost unseen bone line that flows with the edge of the wheel point to help accent the line above as well as the rear fender vent slice.

That slice sits ahead of the faint beginnings of a strong line running across the door and over the rear fender to the top of the sharp taillamps. Other lines accent the sharply peering headlights and the daytime running swoosh beneath.

There is a lot of bodywork going on with the 2015 Lexus RC F, but the overall effect is very strong, bold, and within the boundaries of elegance. In short, the RC F is one of the most beautiful cars we’ve seen on the road and looks more like a concept in a showroom than a production model.

Inside the Lexus RC F The interior of the 2015 Lexus RC F is a beautiful display of fine materials in a well-manufactured setting. Seating is heavily stitched with an excellent look throughout, all of which reminds you that this is a sports car. The Recaro-like front seating is heavily bolstered and has shoulder ports to hint at a five-point harness, but doesn’t have the discomfort involved in actually having one or the race-centric seating that would go with them. Instead, the seats are a beautifully-done set of well-moulded buckets that offer plenty of comfort on any drive.

The back seats are mainly for show, though it is possible to cram a child safety seat or two in there if you must. Otherwise, unless the driver is very short, those seats aren’t really meant to be used.

The driver’s cockpit is well laid out and will be familiar to any Lexus fan. Controls are straight-forward and within easy reach and the new touchpad interface for the Lexus Enform suite is present as well, much to our chagrin. This pad is clunky and difficult to use even when parked, let alone while on the road. Luckily, the updated Lexus voice commands work well and save that frustration most of the time.

The cabin, overall, is a bit cramped for taller folks, but even at six feet, three inches, I had headroom and legroom left over in this car. The cramped feeling is largely from the RC F’s coupe design and sharply-sloped roofline and fits with the overall “fast and fun” sports car appeal this luxury coupe is aiming for. The 2015 Lexus RC F is powered by a 5.0-liter V8 and an eight-speed automatic transmission. At first glance, this appears to be the same engine that was in the IS F, but things have changed. This engine produces 467 horsepower and 389 pound-feet of torque, a jump of about 50 horses over the IS F.

Zero to sixty times in the RC F are good, though not in contention with segment leaders. Most drivers can expect to beat the 5-second barrier in the RC F, but getting to 4.5 will be a stretch. The EPA gives the Lexus RC F a fuel efficiency rating of 19 mpg combined, with 16 in the city and 25 on the highway.

The 2015 RC F is fun to drive. There is no question there. It’s not the best cornering machine or the fastest sprinter on the road, but it’s a fun drive regardless. This car isn’t about competition, of course, as the luxury segment rarely is. Instead, it’s about driver appeal and the feeling and delivery of performance, real or imagined. The RC F has plenty of that with a lot of good feedback and seat-pressing acceleration to please most drivers and passengers. The downside to all of that performance orientation, though, is comfort. The Lexus RC F is loud, no matter how you’re driving, and nearly every noise made by the tires on the road will transmit into the cabin and reverberate. It’s also stiff and unforgiving as a daily driver, with every bump and imperfection of the pavement coming right through to the seat bottoms. We could forgive one but not both counts and see these as serious flaws in the RC F’s design. An unforgiving chassis is one thing, but a cabin whose noise factor is on par with low-end $14,000 vehicles? No.

Another negative is felt during spirited driving and that’s the heaviness of this little car. Most in this segment are relatively heavy machines, with a lot of weight on the chassis due to the luxury underpinnings and accoutrements. We expect that. The RC F, however, also transmits that thickly to the steering, making for a tilting, heavy feeling around curves and into corners. The car itself is very capable, but until the driver gets used to the feeling of weight on those turns, they’ll be taken at lower speeds than necessary. Our suspicion is that the balance of the RC F is a bit too forward.

None of this means that the 2015 Lexus RC F is an unacceptable car, these are just the quirks that bring out the other beautiful points this coupe offers.

Competitors for the RC F are few and mostly European. The BMW M4 is definitely on the RC F’s radar, as is the Mercedes-Benz C63 AMG. Both are more refined and more fun to drive with more astute power delivery. The Audi RS 5 is also a contender here, especially with its superior handling thanks to an all-wheel drive architecture. The Cadillac ATS-V is also worth mentioning in this context as another beautiful rendition of power delivery in a luxury package. The Lexus RC F faces tough competition, but delivers on exterior styling and throaty sound with an interior experience that’s on par with the European rivals.

The 2015 Lexus RC F is a beautiful, powerful little coupe with plenty of appeal. It’s exterior design is almost universally loved by those who see it and some of the color options, notably the red we had and the blue we’ve seen, really bring out those lines with signature shading and eye movement. This is a lovely new sport coupe from Lexus for sure.

Test Period Length and Limitations
The RC F was a manufacturer’s press loan for about a week. During that time, a total of 475 miles were put on the car in varied driving conditions.