There’s a new niche in the automotive industry that’s been creeping into the 2018 product line. It’s a sportback, which is like a hatchback, but with a little more sports car styling. I like the name – sportback. It has pizzazz and really identifies what’s in store for these cars.

This week, I drove a sportback, probably the best one out there. It’s the 2018 Audi A5 Sportback. There are several variations of the A5, but I got behind the wheel of the Sportback, which is brand new for this model year. This small luxury car has a lot going for it. The unique looks, the sporty styling and the German-engineered performance all make the A5 sportback quite memorable. 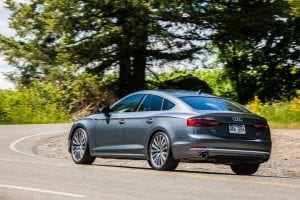 The front is a typical-looking Audi. That’s not to downplay the front end styling as it’s quite attractive. It has that aggressive-looking grille which features Xenon headlights and LED daytime running lights. he indented styling on the hood is sexy and makes the sportback really special. That styling continues on the side panels giving the A5 sportback a sleek profile. The roofline slopes aggressively down the small C-pillar right to the trunk. It’s not quite a hatchback, but it’s not a sedan either. The back side is less styled but a sharp rear spoiler hints at its overall sporty nature. LED taillights and dynamic rear turn signals highlight the back side of this car.

The A5 sportback has a 2.0-liter turbocharged four-cylinder engine. Audi’s engineering never disappoints from a performance standpoint, and this sportback produces 252 horsepower and 273 lb./ft. of torque. It’s not a blazer off the line, but it is so smooth and more quick than fast. The seven-speed automatic transmission is outstanding with no turbo lag. It’s one of the best seven-speed transmissions I’ve driven. Audi is known for its all-wheel drive, known as quattro, and the A5 sportback has it. That only makes the handling even better, as does the responsive, firm steering. It handles and drives like a sports car, rather than some dull sedan. 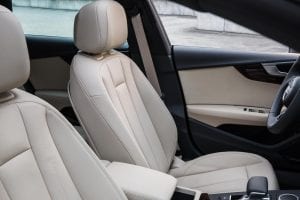 Inside, the A5 lives up to its luxury status. There’s quality touch points throughout. My tester had a nougat brown interior. It was bold and some who saw it felt it was too bold. But the leather seats felt nice and the soft dashboard and side panels helped keep the road noise to a minimum. The back seat provided ample legroom and shoulder room. With the slope of the roofline, head room was an issue for rear passengers over six feet tall.

The advantage to the sportback is the added cargo room. With rear seats up there’s 21.5 cubic feet of room in the “trunk”. Fold the rear seats down and there’s 35 cubic feet of storage room. That’s tremendous for a small car like this. This adds to the versatility of this car for sure.

The infotainment system for Audi is one of the best out there. They’ve been at the forefront for a while when it comes to technology and this model year they have improved on their system. The virtual cockpit features a 12.3-inch color display behind the steering wheel. There’s also a 7-inch center display with Audi’s MMI control panel. There are supported apps that go with the WIFI-enabled features like traffic and weather updates, streaming services, rear-aloud personalized news headlines and even Twitter alerts. There’s integration with Apple CarPlay and Android Auto too. It all pairs well with a Bang & Olufsen sound system. If you love technology, then you’ll love this Audi system, which can still be tricky to learn, but the small improvements they’ve made have helped it become more intuitive.

The A5 Sportback has an EPA rating of 24 mpg/city and 34 mpg/highway. In a week’s worth of heavy-footed driving, I averaged 26 mpg.

Whatever the name or whatever new little niche it belongs in, the Audi A5 Sportback is a memorable car. With ample room and ample luxury it’s a rare breed that’s fun to drive but also has distinction.