It’s best not to judge a book by its cover. That metaphor applies to car reviews too. Therefore, I’m conflicted with this week’s car review. I generally like the Mazda brand with its distinctive driving style and nice interior. But I also haven’t found a single subcompact SUV that I like. So, which side wins out?

I can’t give it away just yet. Read on and draw your own conclusions. Let’s just say, both of the statements I said remain true. That being said, the 2019 Mazda CX-3 is the best-looking, most aesthetically pleasing “bubble” crossover on the road. In fact, it’s insulting to call it a “bubble crossover (note: I coined this term for these tiny crossovers that look like bubbles) as it has sculpted looks and a modern, timeless design. 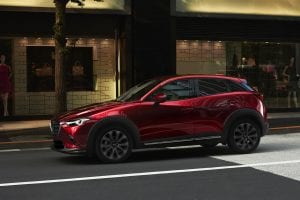 The front end looks longer than it is thanks to the styling on the hood. This gives the CX-3 an elongated look. That same styling on the hood continues on the side panels giving the CX-3 a consistent fit and finish. Black accents on the wheel wells make it look more aggressive and give the tires a larger appearance and really makes it look rugged. A small rear spoiler flows perfectly off the back end from a sloping C-pillar.

I appreciate the overall design of the CX-3 and it gets high marks for not being too cutesy, but also being bold enough to set itself apart. That’s rare within this growing segment.

As I noted, Mazda has a reputation of over performing its output numbers. And, once again, that’s the case with the CX-3. Don’t get me wrong, this isn’t an enthusiast’s darling but it’s peppier than the 148-horsepower rating indicates too. The 2.0-liter engine could really be something special with a turbocharger and a better transmission than the six-speed automatic. As such, this transmission feels dated and hinders the otherwise impressive performance of this vehicle. 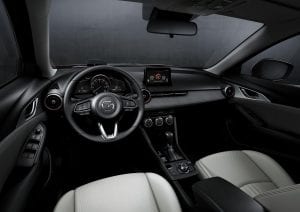 The interior of the CX-3 is better than most of the other competitors out there, especially considering the price point. My tester was the top trim, Grand Touring, which did come with leather seats, heated front seats and a heated steering wheel. The back seat was comfortable enough for two adults, although a third adult would be quite cramped. So, while the CX-3 is considered a five-passenger vehicle, it’s best to only use it for four passengers.

The Mazda Connect infotainment continues to be my least favorite infotainment system in the industry. It lacks any kind of cutting-edge technology and is not intuitive. There’s not even Apple CarPlay or Android Auto compatibility. For me, this is a deal breaker that negates all the other positives of the high-quality interior and excellent touch points.

Kudos to Mazda for offering, simple and few, trims. There are only three trims, including Sport, Touring and Grand Touring. The front-wheel drive, which is standard, Sport trim starts at under $20,000. My tester was the top-of-the-line Grand Touring with all-wheel drive. It had a starting price of $27,145. With a few extras like Premium Package which includes the aforementioned heated steering wheel and lumbar support and auto-dimming rearview mirror, and my tester had a final MSRP of $29,625. That is an affordable price for a crossover with AWD and leather appointments.

The AWD CX-3 has an EPA rating of 27 mpg/city and 32 mpg/highway. It’s easy to hit that 30-mpg plateau in the CX-3, even with a lead foot. Of course, that’s the point of this vehicle. It’s supposed to be like an SUV, but with better fuel economy like a car. It achieves that, certainly.

The 2019 Mazda CX-3 checks off a lot of my boxes of what I like about a vehicle. I can even give it look past that it’s not “my kind of vehicle” as I don’t enjoy these small crossovers generally. If we’re judging this book by its cover, then it’s a winner. But there are certainly some holes in the plot of that book, but all-in-all it’s a pretty good read, to continue the book metaphor.