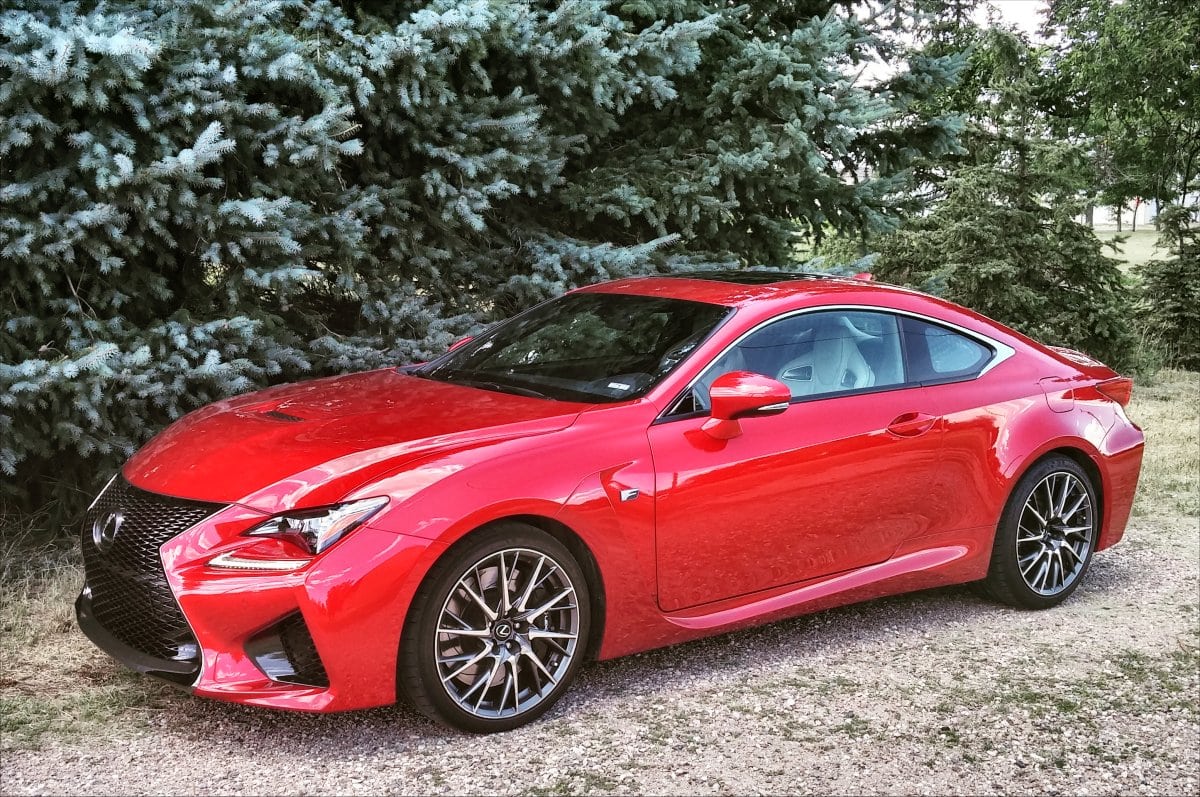 The 2019 Ascent marks a re-entry by Subaru into the three-row crossover market, recapturing the buyers the company was losing to the larger family segment. Unlike the Tribeca that it replaces, the Ascent is a very well-done, three-row family mover with all of the expectations we have of a Subaru. 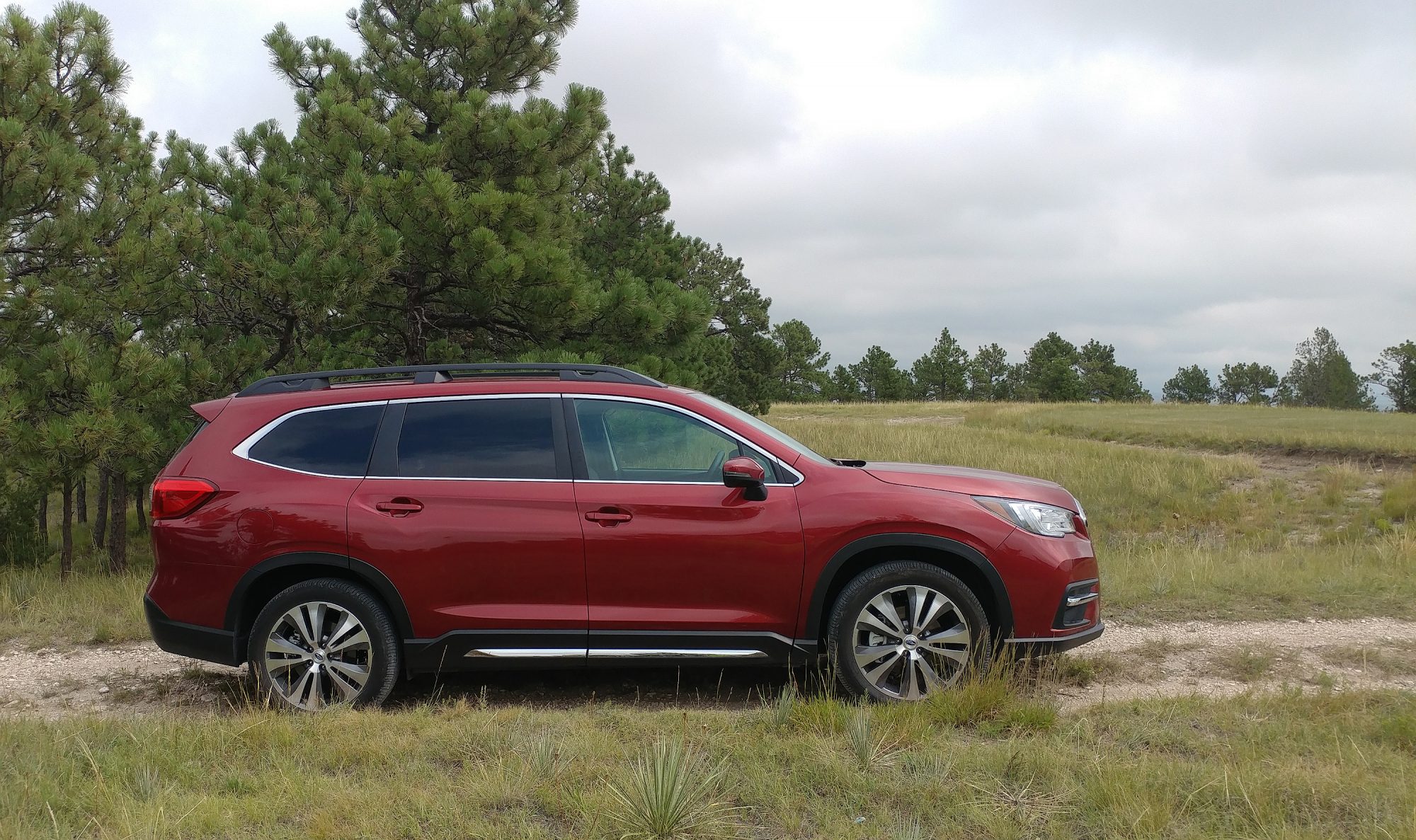 The 2019 Subaru Ascent is new from the ground-up, built on Subaru’s global platform that’s shared with most other models in the company’s lineup. This means it retains the legendary all-weather all-wheel drive the Subaru brand is known for as well as the “get out and do stuff” appeal of the brand.

Fitting at the largest size point in the Suby lineup, the 2019 Ascent has elements from both the smaller Forester crossover and the more upscale (but less roomy) Outback model. The Ascent seats up to eight and is a match for most of the best-sellers in the three-row midsize crossover-SUV market in terms of accommodation and ergonomics.

The Ascent has four doors, a hatchback, seven or eight seats (depending on interior configuration), towing rated at up to 5,000 pounds when equipped, and comes standard with all-wheel drive.

The 2019 Ascent has four trim points to choose from, each with the same engine/transmission combination and each with AWD as standard. 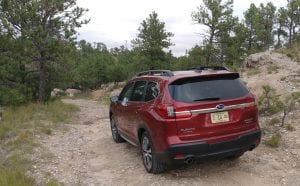 The 2019 Ascent is not the most standout vehicle in a crowded parking lot of three-row options, but it does have some signature Subaru qualities to its styling that make it easily identifiable as a Suby. The front fascia, hood, and windscreen are very much akin to what’s seen on the Outback, as is the ride height and door paneling. The body shape of the Ascent is closer to the Forester, however, with a slightly boxier look than what’s on the Outback.

This creates a definite crossover-SUV design for the Ascent that’s nice to look at, but not the loveliest option on the lot. We like it, though, and the overall appearance fits the Ascent’s purpose better than would a more wagon-like style such as that found on the Outback. There are some upscale elements added as well, which bring it up a notch from the rather homely look of the Forester. 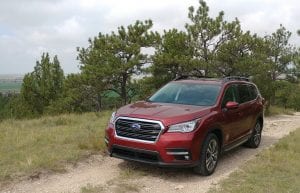 Inside, the Ascent is well-designed with good quality materials throughout. We like the general austerity that is found in a Subaru when compared to some other, busier models. The feel is more functional than pretty for pretty’s sake. Seating is comfortable, switchgear and controls are easy to find and understand, and there is plenty of room all around. The third row is largely for kids, but that’s the norm in this segment. Adults can fit there when required, but it’s not recommended for long. Access to the third row in the Ascent is via either the space between two captain’s chairs (if opted) or the space created when the one-touch tilt-slide on the second row bench or chairs is used.

Cargo space in the 2019 Subaru Ascent is at 47.5 cubic feet with the third row stowed and 86.5 with the second row folded.

The 2019 Ascent is powered by a 2.4-liter four-cylinder engine that outputs 260 horsepower to a continuously variable transmission (CVT) and full-time AWD. The turbocharged engine is opposed-piston, making it smoother than most V-shaped engines, and delivers power early and predictably. 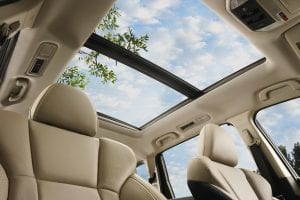 There is little wait for the Ascent to get up to speed or accelerate for the pass and off the road, the 2019 Ascent does everything any Subaru owner would expect it to accomplish. Inclement weather is also not a problem for the well-done AWD system on the Ascent.

Fuel economy in the Subaru Ascent is rated at 21 mpg in the city and 27 mpg on the highway. In the real world, we averaged 25 mpg overall, which is better than the EPA’s expectation and better than most AWD-equipped options in the midsize three-row market.

Handling in the 2019 Ascent is similar to what’s found in the Forester, with good maneuverability and visibility for the driver. It’s not sporty or quick, but the Ascent is quiet on the highway and smooth enough for most people’s expectation.

Competing with the 2019 Subaru Ascent are several competent three-row options in the midsize crossover-SUV segment. The Honda Pilot is a best seller while the Chevrolet Traverse is an excellent, top-choice entry. The Toyota Highlander is a perennial favorite as well.

The 2019 Subaru Ascent is an excellent option in the fast-selling and growing three-row crossover-SUV market. It’s not the most family-oriented, in terms of comfort and entertainment, as are some of the more minivan-replacement-focused options, but it’s got the Subaru appeal and marque for sure. For families who are more likely to get out and do stuff, the Subaru Ascent is a solid choice for making that happen. With good fuel economy, a usable third row, and off-the-shelf storage atop its roof, the 2019 Ascent matches the expectations of a Subaru family that’s outgrown its two-row vehicle.

Test Period Length and Limitations
The Ascent was a manufacturer’s press loan for about a week. During that time, a total of about 230 miles were put on the vehicle in varied driving conditions and with varied passenger and cargo loads. Inclement weather was included in the assessment.