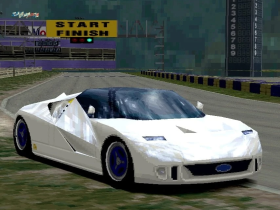 The American Motors Company was a spunky little automaker that competed with the giants of Detroit. One of the most ground-breaking vehicle designs to come from AMC was the AMX/3 (or AMX III), which debuted in 1970 as a promised 1971 model. It was a lower-cost supercar meant to compete with Italian offerings of the time.

Known largely for its mainstream sellers like the Rambler, AMC was formed when two well-known companies of the 1950s, Nash and Kelvinator, combined. By the mid-1960s, though, the company was still struggling to compete with the larger Detroit makes.

During this time, while introducing innovations and designs that were far ahead of the slower-to-market companies it competed with, AMC often made a lot out of a little. Budgets were small, design costs were kept minimal, yet new ideas and better technologies were kept at the fore. Most of these innovations were introduced in the Rambler models that were the driving force of AMC’s corporate bottom line. Things like tandem brake master cylinders, automatic transmission shift patterns, disc brakes on all four wheels, and other things that are common today.

With the eye-catching and extremely powerful AMX/3, however, American Motors stepped out of its normal persona and showed a wild side.

The AMC AMX/3 was a mid-engined sports car featuring a large-displacement V8 engine in a tiny supercar package. Unveiled in March of 1970, the AMX/3 was a concept aimed for production as a global offering. Meant to compete with the De Tomaso sports models (including a rumored Pantera model that was forthcoming), the AMX/3 was hoped to appeal to muscle and sports car buyers.

Design for the sleek AMC AMX/3 was credited to Giotto Bizzarini, but most of it was actually done by Italdesign and Autocostruzioni. With input from Bizzarini and BMW, the latter of which did much of the road work and testing for the car. The AMX/3 was to be produced by Karmann in Germany, who had previously produced the AMC Javelin 79-K. Ultimately, however, only six of the AMC AMX/3 were to be built, all as pre-production prototypes for testing and publicity.

The 1960s were a rough period for AMC financially. Its mainstream sellers, mostly family-oriented and compact vehicles, were seeing fewer buyers in the U.S. Viewed as boring and stodgy, AMC vehicles that were once popular in the 1950s were becoming the “yesterday’s grandparent” car of the 1960s. AMC needed to appeal to younger buyers and the Javelin, which appeared in 1968, was a good effort at making that goal, but was ultimately too little and too late. AMC needed something more dynamic.

That came with the AMC AMX/3 unveiling in 1970. The AMX/3 had been preceded by the AMX/2 and the original AMX in 1968. The AMX/3 was the evolutionary culmination of the AMX series. And it was sleek, powerful, and ready for production.

In March of 1970, promotional photos of the car were produced in Rome in front of the Colosseum and sent to the Italian press. In April, the AMX/3 was unveiled in New York City. Both were just days or even hours before the official unveiling of the De Tomaso Pantera in a bid to usurp the excitement that company had hoped for their car. The two cars were on the same show floor during the New York Auto Show in April 1970 when the Pantera made its official debut.

The AMX moniker officially meant “American Motors eXperimental,” but it would become the official name of this new series of sports cars to culminate in the AMX/3. One of the six vehicles produced held the name AMX III and the sketch for another  was labeled AMX/K, likely to designate a European model from Karmann.

The AMC AMX/3 was largely developed by European companies as an outsource from the decidedly busy and less capable American side of AMC. Financially, it was cheaper to put the mid-engine design costs onto other firms with experience and keep eventual production costs down than it was to rethink and retool AMC’s U.S. facilities, which were front-engine only.

Plans with Karmann included an initial run of 24 special AMX/3 cars to be made followed by an increase in production to 1,000 more units in 1971 with provision for up to 5,000 units annually for both European and U.S. sales. The AMC AMX/3 was expected to be priced at $10,000 to $12,000 U.S., which was well below the bottom price of most Italian sports cars.

The chassis and suspension for the AMX/3 was based on a semi-monocoque design with a central beam and boxed sills. The rear lower wishbones were trapezoidal with  some aluminum parts appearing. Coil springs and telescopic shock absorbers were also included, including dual shocks for the wide rear wheels. The body design was in a two-door, hatchback style and joined to the floor pan to create a self-supporting unibody.

Bodywork on the AMX/3 was very low and wide, offering strong points of reference near the front wheels and at the rear haunch. Weight distribution was 47:53 front:rear. Powering the AMC AMX/3 was the company’s own 6.4-liter V8. This cast iron block had a short stroke with a 10:1 compression ratio. It had an output of 295 horsepower. This engine was a staple at AMC, but would likely have been replaced by the time of production with a 6.6L V8 that replaced the 390-series 6.4 in 1970. That newer engine was 401 cubic inches and offered 335 horsepower. A BMW-sourced M09 series 4.5-liter, eight-cylinder engine (240 hp) was also tested and a potential alternative for European market sales.

Most of the produced AMX/3 cars used a four-speed gearbox from Oto Melara. One of the cars had a five-speed manual from ZF instead. Production would likely have gone with the Oto option for its lower price and better fit to the AMX/3’s intended audience.

Of the six known AMX/3 prototypes produced, only three were road-ready. Three more were produced shortly after, but are not considered AMC AMX/3 cars as they were only based on the chassis and did not otherwise fully match the original prototypes. Nor did they have chassis numbers or approval from AMX.

The original AMX/3 was painted green and emerged in the spring of 1969 with no chassis number. It was used for testing by BMW before becoming a parts donor for AMX/3 prototypes to follow.

The second AMX/3, often called the “Red Monza Car” for its red and black motif, was produced shortly after the first and was the first of the cars to get a chassis number. This car included nearly identical elements to the first, but added a more completed interior and a few changes based on what was learned with the first. This AMX/3 was soon sold to a collector in the U.S. and has changed hands a few times since, ultimately getting a full restoration in 1990 and again in 2015 before selling in 2017 to its current U.S. owner.

The third AMX/3 was produced almost alongside the second, but without some of the body changes made to the second such as added air intakes and changes to the rear wings. The interior, however, was complete. This was the car used for publicity photos in Rome and which was the press launch vehicle in New York. This car was retained by AMC and then sold to Richard Teague, who had headed AMC’s design studio for decades. Teague’s family still owns this AMX/3.

The fourth AMX/3 produced was often called the “Torino Car” and featured many design changes based on what was learned from the first two cars. This model was finished after AMC had pulled funding for the AMX/3, after deciding not to produce it. It gained its name after designer Diomante showed it at the Turin Motor Show in late 1970. The company sold the car in 1971 to a U.S. collector.

The fifth AMX/3 was completed about the same time as the fourth, and was true to the original prototype’s design to become an almost twin. It was imported to the U.S. by AMC alongside what was left of the first prototype and several completed components besides. In 1978, Teague also bought this car from AMC and then made a few changes to stylize it for himself. The prototype was restored in 2006, including its original yellow paint, and remains in ownership by the Teague family. This is the AMX/3 which was once photographed with “AMX III” badging.

The sixth AMX/3 was a driveable prototype, but wasn’t completed until 1971. It’s similar to the first and third prototypes in design. Most of its interior, however, are Fiat and Bertone parts rather than AMC parts as are some of the lighting and other body components. It was exhibited in 1976 by Bizzarini, who likely did the completion work for the car. The car is still in Italy.

Other AMC AMX/3 “prototypes” have appeared over the years, often using original chassis made by Diomante but never sent to AMC when funding was pulled. These are usually not considered part of the AMX series, however, and rarely have period bodies or chassis numbers from AMC. They are traded among collectors, but are considered replicas. 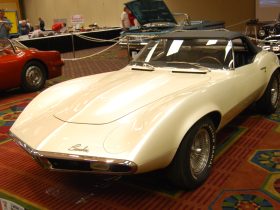