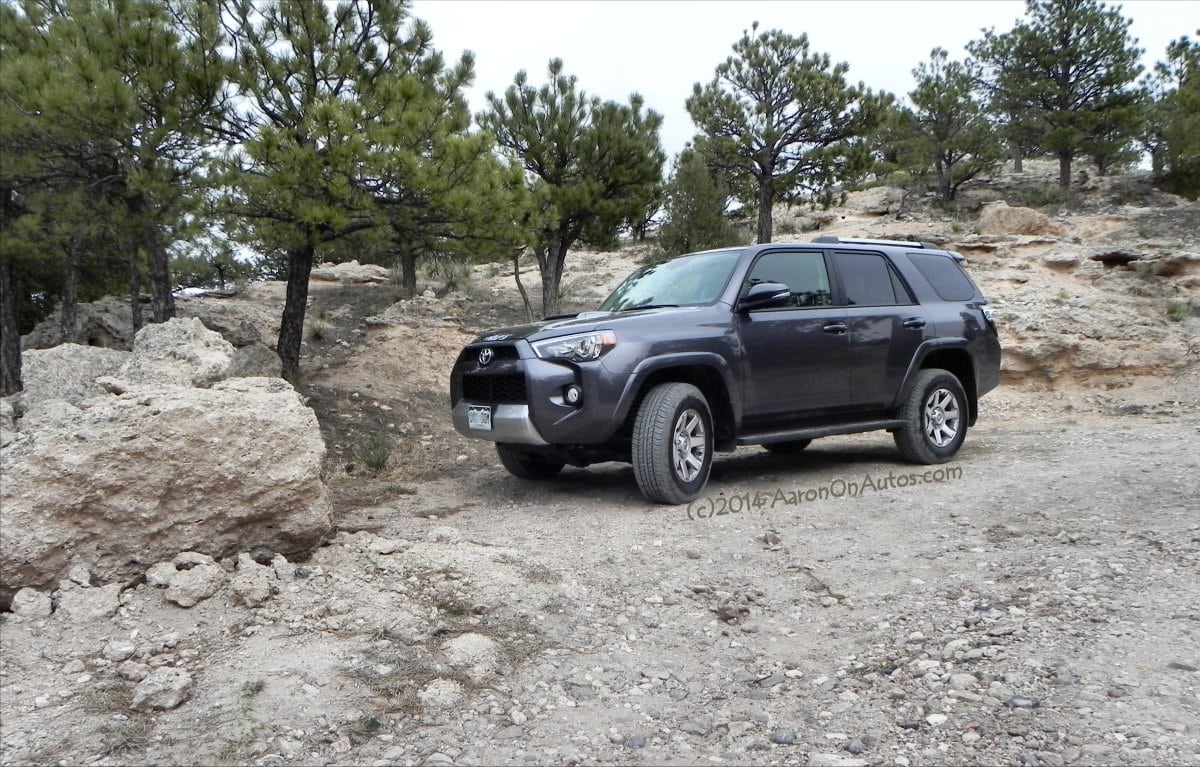 The 2014 Toyota 4Runner Trail – what the 4Runner should be

Zero to sixty in four seconds. 155 mph top speed. Butterfly doors. Carbon fiber everything. That’s a supercar. But this one’s a plug-in hybrid. If you ain’t into the “green” thing, well, the BMW i8 will make you a believer.

The 2014 BMW i8 introduces a serious halo car for the German automaker. The halo happens to be green, but with this car, that’s secondary once you’re in and driving. For all intents, the BMW i8 is a powerful, sleek, beautiful exotic that everyone will notice and all will love to drive. It also happens to be a plug-in hybrid.

I was privileged to have four days with this awesome machine.

Under the BMW i8 Hoods

Yes, that’s a plural “hoods.” The i8 is powered by a gasoline engine and electric drive, but not in the traditional gasoline-electric hybrid sense we might think of with the Prius or Volt. Instead, this BMW splits duties with the electric motor powering the front wheels and the gasoline engine powering the rear. There is no physical, mechanical connection between the two and they operate independently but in concert.

The engine is a 1.5-liter turbocharged three-cylinder attached to a six-speed automatic transmission. This tiny little aluminum plant sits directly behind the passenger’s compartment, just ahead of the rear axle. Up front, a 96kW electric motor churns the front axle through a unique two-speed automatic transmission. The motor and battery cooling system sit just behind the front axle and steering. Batteries (7.1kWh) for the i8 are located behind the motor and through the passenger’s cabin in the large tunnel that separates the front seats.

Access to the rear engine is through a panel held in place with thumb screws ahead of the luggage compartment. Access to the electronics and motor under the hood requires a special technician’s key.

All told, the BMW i8 produces 357 horsepower and 420 lb-ft of torque in all-wheel drive. This may not seem like much until you consider that the entire car only weighs about 3,300 pounds. No EPA numbers have been issued for the i8, but real-world puts it somewhere in the 95 mpg range when driven nicely (mostly electric) and around 40 mpg when driven like the awesome sports car that it is.

The aluminum subframes of the i8 are just the beginning for its high-tech design. Chemically hardened glass and carbon-fiber make up the majority of the i8’s body and chassis.

All of this means that performance-wise, there is everything to like about the i8. Its official numbers are 0-60 in about four seconds and a top speed of 155 miles per hour. The hybrid supercar is capable of driving all-electric at speeds up to about 65 mph and for a range of 25-30 miles (closer to 30 in our real-world drives).

Behind the Wheel of the BMW i8 Getting in and out of the i8 is not exactly easy or ergonomic. Very high sills, in order to best European side impact requirements, and an extremely low car mean that most people will find it difficult to get in once those beautiful butterfly doors are up. Of course, with a car like this, there is a lot of incentive to get in, so this gripe seems moot. I found that the best entry method was to put my right foot over the sill and onto the floor, point my hind end at the seat, and fall into the car. Getting out is a matter of throwing your legs over the sill to the ground and rolling forward, hoping your knees don’t give out.

Once you’re inside, though, everything becomes pure joy. The front seats of the i8 are very comfortable and in line with what you’d expect from a high-end BMW. The sport seating is similar to those you’ll find in the 2- and 3-series cars, though the bolsters could be a bit more robust to facilitate control in hard performance driving. The rear seats are mostly just for groceries, as they’re nearly non-existent and even child’s car seats won’t fit around the front seats and into that tiny space. It’s good that they’re there, though, as the luggage compartment is about the size of your carry-on bag.

Driver and infotainment controls are much like any other BMW as well. The shifter, paddles, info screens, and so forth were all very familiar to us thanks to our time in the 228i recently.

Now for the good stuff. No matter how you drive the i8, it’s a purely joyful experience. Everything about this car is the pinnacle of excellence. In handling, speed, cornering, and just about-town cruising, the BMW i8 makes you happy. All the time.

The drivetrain is exceedingly intelligent. It swaps from electric-only to hybrid mode without fanfare and does so with an emphasis on keeping the EV going and keeping the batteries filled. Whenever the engine is running, all effort not being used to power the rear wheels is channeled into charging those batteries. This aggressive charging strategy means that the batteries are rarely depleted. Couple this with the charge port at the front-left fender for plugging in, and there’s no excuse to be out of juice in the i8.

There are three modes in the i8: Comfort, Eco Pro, and Sport. Comfort mode emphasizes interior comfort and drive cushion, Eco Pro emphasizes energy savings and fuel efficiency, while Sport emphasizes pure muscularity. Sport mode forces the powertrain to keep the engine running and thus holds the car in AWD. This, in turn, means both top performance on the road and continued charging of the battery system.

Aggressively driving the car, such as from a standstill to get 0-60 times, will show the astute driver the very intelligent engineering that went into the electronics and mechanics of this car. Starting from zero, the driver will note that for the first 5-7 mph, the car runs in electric-only, being powered purely by the immediate torque of the motor up front. When the wheels are spinning at a rate that is conducive to peak performance from the engine, it kicks in and continues the forward power of the car, adding in its muscle and accelerating the i8 faster. This smart way of doing things means that the engine doesn’t need to wind up to its peak performance point nor does it waste energy dragging on the powertrain while doing so.

This translated to my best 0-60 mph time of 4.2 seconds in the car. Further, the unique two-speed transmission for the motor means that it engages the wheels at all speeds, including the higher speeds that would otherwise be beyond the RPM capabilities of that motor. In handling, the BMW i8 is as tight as they come. It corners beautifully and uses a combination of torque vectoring, a tight chassis, and smart braking and regeneration to give the driver supreme amounts of control around hard turns at speed. A 90-degree corner using only one lane can be done at 60 mph by a competent driver.

Internal ambiance is enhanced by engine sounds piped through the stereo. This subtle, but very effective “muscle noise” addition (it can be turned off) makes this hybrid supercar feel like a big, beefy, muscular car and lets you forget the “green” aspects of this impressive machine and make the i8 into a powerful track and road runner when powering along in sport driving. Despite knowing it’s faked, it still adds thrill to the ride.

Extreme performance with excellent efficiency in spite of it.

Beautiful car inside and out.

Cramped 2+2 coupe and all that this implies.

Difficult to get into and out of because of its very low stance and high, thick sills.

The BMW i8 may not be your daily family car or your preferred drive to the grocery store, but it will be your favorite drive. Always. Truly a magnificent mixture of efficiency dynamics and driving excellence with powerful performance, the BMW i8 is supercar awesomeness.

Test Period Length and Limitations
The car was given as a manufacturer’s press loan for a total of four days, during which time 401 miles were put on the i8 in a mixture of around town, highway, and hard performance driving.