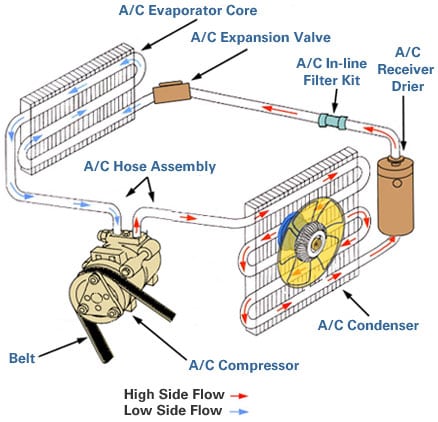 Tire rotation is something that many car owners vaguely know about, but few truly understand. It’s one of those things that your service mechanic might bring up occasionally as an extra $20 service they “recommend,” but doesn’t explain. For the home mechanic, tire rotation may never happen at all. Yet on many vehicle’s, it’s vitally important to both safety and saving money.

Tire wear happens because the weight distribution of the vehicle, the amount of turning done, and nuances in the vehicle’s alignment cause one tire or one side of the vehicle to wear faster than the other.

A front-wheel drive vehicle usually has a front-heavy weight distribution (often about 60:40) when compared to a rear-wheel drive vehicle (often close to 50:50). The exception here will be pickup trucks, which are usually front-heavy except when loaded. Vehicles which turn one direction more often than another. For example, in the U.S., we tend to make about 65% of our turns to the right or passenger’s side of the vehicle, which causes more wear on the left-front (driver’s-side, front) tire because of vehicle dynamics in those tighter right-hand turns. Finally, misalignment of the vehicle, which is relatively common, can mean slightly more wear on one side than the other due to “drag” as one tire is less in line with the others when driving straight forward.

Most manufacturers recommend tire rotation happen every 5,000 miles or so and tire makers generally have the same recommendation. The rotation pattern most commonly used in the U.S. is a back-front cross.

A typical car tire lasts between 20,000 and 30,000 miles (some far more, depending on tread and chemistry). At 5,000 miles between rotation, this means 4 to 6 rotations during the tire’s lifespan. Using a back-front cross, a tire will only be in the same location twice during its expected useful lifetime on the car (four rotations are required to put any tire back in its original position).

For the home mechanic, rotations can be done with two jacks or a lift. With jacks, begin at one corner and work your way around the car, using a jack stand to hold one corner (usually front-left or front-right on FWD vehicles) up for the procedure as you progress around the vehicle to move tires and wheels. Typically, a mechanic will go left-front and rear, lowering the rear and going to right-front, then right-rear, then left-front again. Thus each corner of the car is raised and lowered only once with just one corner (left-front in this case) being up for the entire rotation procedure.

Some mechanics also include the spare tire (if a full-sized spare is employed) in the rotation in order to keep all of the tires even. In this case, the typical answer is to put one of the rear tires in the spare’s position and place the spare on the rear of the car in its place. Thus the front-rear cross pattern merely has one of the front tires that would have moved to the rear being placed as the spare and the former spare being put on in its place. Because the front of most vehicles is more sensitive to uneven tire size than is the rear, this keeps the slightly larger spare on the rear of the car where it will be less likely to cause misalignment.

Whatever you do, before you decide on a tire rotation schedule for your vehicle, be sure to consult the owner’s manual and the tire manufacturer’s recommendations before you do so. Tire rotation can go a long way towards improving the lifespan of your tires and thus save you money in the longer term.