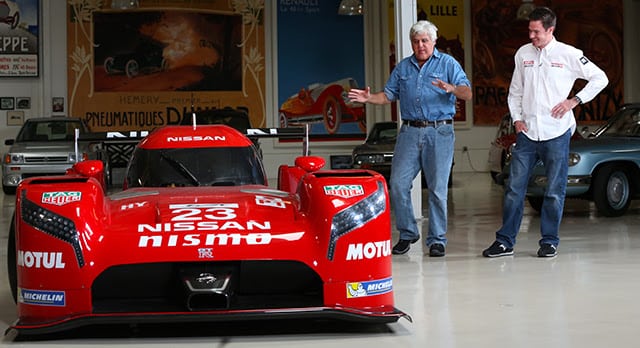 This week’s Jay Leno’s Garage features a surprise: 24 minutes spent with Nissan’s first P1 entry into Le Mans, the GT-R LM NISMO. Accompanied by NISMO chief engineer Zack Eakin, the car is scrutinized by Leno and his cameras as they talk about the build process and how this totally unique, very innovative car plans to capture the world’s toughest race.

The rules for the Le Mans 24 Hour race and the vehicles in each category are some of the loosest in the racing world, allowing some very innovative approaches to how the race cars and their engineers can tackle the rigorous requirements of the race’s hard course. Nissan chose to come in with both fists swinging, ignoring LM convention and going with a front-wheel drive car with a hybrid powertrain and highly unusual air channeling and dynamics. The result is this GT-R LM NISMO.

The car will be driven by Jann Mardenborough, who came to NISMO from the GT Academy as the Season 3 winner and has become one of their most valued racers. He was recently named one of the top 50 most marketable athletes in the world as well. From a remote location, Jann shows Jay the car in its garage and then takes it out on the track for a run with onboard cameras rolling. It’s two minutes of thrilling track time as Mardenborough talks through the turns and dynamics in real-time.