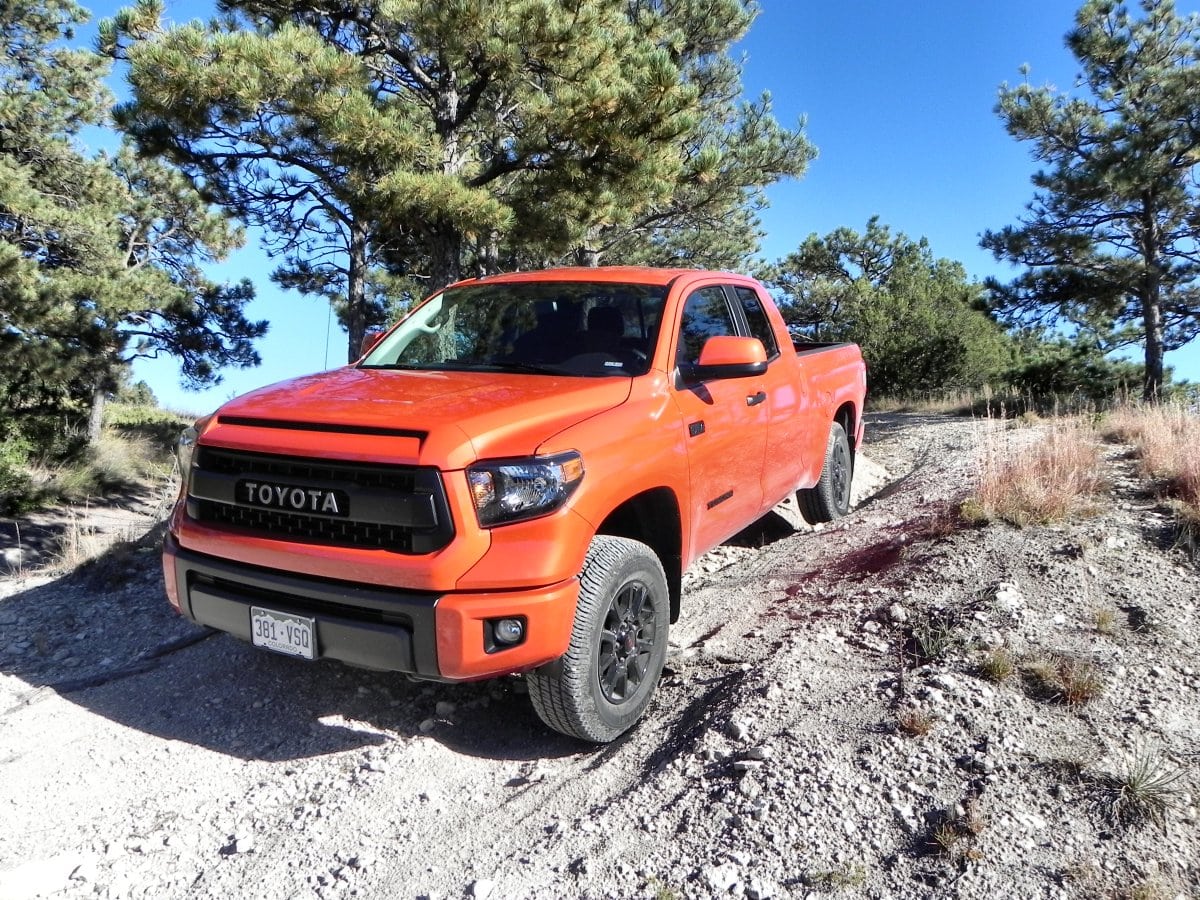 This year, my tester for the week is having to take a back seat to its little brother. For 2016, it’s all Tacoma this and Tacoma that. It could give the Tundra a complex. Thankfully, my tester, the 2016 Toyota Tundra, is stout and has a solid reputation to withstand the praise and attention the Tacoma is getting.

While not significantly changed for this model year (you know like the Tacoma is), the 2016 Tundra still has plenty of updates and new features to discuss. For 2016, the Tundra receives an updated electronics interface. Higher trims receive a bigger fuel tank and the SR5 trim (my favorite) gets a new, more aggressive front end.

In April, sales for the Tundra were down over nine percent (year over year) and lagged in sixth place, according to data by pickuptrucks.com. The Tundra even lagged behind the Tacoma and was behind the three U.S. stalwarts in the full-size segment, Ram, Silverado and F-150. So what’s holding the Tundra back? It could be the need for an upgrade in the ultra-competitive truck segment. 2014 was the last makeover for the Tundra and the last major redesign was in 2007.

For this model year, the Tundra is still competitive in every area truck owners want and need. And while the looks may be a little underwhelming, the Tundra is still a handsome truck with a stout appearance. It has a shorter looking front end and the Tundra’s main focus is on the cabin area, where it blows its competition away. Inside, the Tundra’s space is as good as anyone’s. Passengers will find ample legroom in even the regular cab, but it’s the double cab and crew cab that offer tremendous seating area and comfort. My tester was the double cab and the back seat was big enough to lay down a mattress on, and in the CrewMax trim, you can almost pitch a tent in the back seat.

Toyota’s new Entune infotainment system is a new introduction for this model year. This upgrade alone is significantly better as the last interface was not intuitive while the new one integrates well with smart phones and has a wide variety of apps that add to the driving pleasure.

Front seats are comfortable and like many other trucks, there are plenty of storage areas including a big center box and side pockets in the doors. In the back, the CrewMax trim has reclining rear seats and as mentioned, a cavernous amount of space. The rear seats of the Double Cab and CrewMax flip easily, increasing storage space.

New for this model year, there is a power opening rear window which is uncommon for most pickups. Of course all the comfort and space doesn’t mean much if a truck can’t handle a workload. The Tundra has two different capable V8 engines. There are no V6 or diesel offerings for this truck. A smaller 4.6-liter V8 makes 310 horsepower and 327 lb./ft. of torque is one option but should be the choice for those who don’t heavy towing needs as this engine has a maximum towing capacity of 6,800 pounds, which is pretty puny for this segment.

My tester was the more capable 5.7-liter V8 which makes 381 horsepower and 401 lb./ft. of torque. This bruiser drove big. It has a six-speed automatic transmission which often took a while to shift in some gears. The Tundra is in need of an improved transmission. This Tundra has a maximum towing capacity of 10,500 pounds.

All Tundras come as both rear-wheel drive and four-wheel drive. I’ll state again, as the broken record I am, there is little sense in owning a truck without 4WD. Sure there’s a little hit on fuel economy between RWD and 4WD, but a truck is meant to work and perform and the 4WD adds that extra effort needed for whatever conditions may exist.

My tester had a 6.5-foot bed. There’s two other bed sizes including a 5.5-foot and 8.1-foot. I couldn’t imagine how big the long bed version would drive as my 6.5-foot one was big and bulky. Parking and maneuvering were already a challenge in a truck that size. My Tundra had a base price of $41,220 and with the Limited Premium Package and running boards (so necessary), my tester had a final price of $43,825.

From a pricing standpoint, the Tundra is extremely competitive as some of the F-150s and Silverado/Sierras can exceed $60,000.

Fuel economy for the Tundra Limited with 4WD is 13 mpg/city and 17 mpg/highway. This is sub-par fuel economy even for a segment not known for fuel economy. It’s this reason some of the competition has introduced V6 engines or lighter bodies for their trucks. Perhaps the next generation of Tundra will explore ways to improve fuel economy. In a week’s worth of driving I averaged only 15 mpg, and a lot of that was on the highway.

The Toyota Tundra is a stout and capable truck. It’s struggling to find its way in the segment and even now within the Toyota family. But, this truck is still very much ready for the spotlight and to compete within the full-size truck segment.