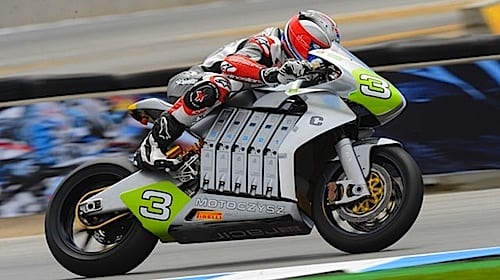 MotoCzysz… Gesundheit! Though we won’t spend time explaining how to pronounce it, suffice it to say, MotoCzysz is one of the top three electric motorcycle contenders fighting electric bike races.

MotoCzysz & Four Consecutive Wins. It’s one thing to win, it’s quiet another to achieve it four times in a row. Yet this is what happened to the MotoCzysz team at the TT Zero race at the Ilse of Man. Although this year Zero Motorcycles was absent, this led the way for MotoCzysz and Mugen to duke it out on the toughest motorcycle race ever, the Isle of Man. For those of you who have never heard of this exotic electric motorcycle, and in my not so humble opinion one of the nicest electric motorcycle design, MotoCzysz has been around since the early days of the modern electric vehicle, EV era.

The race was red hot, as always with electric motorcycle racing. Michael Rutter riding for MotoCzysz brings in his third straight win, and fourth for the team. It wasn’t without plenty of excitement. Towards the end of the race, John McGuinness on his Mugen Honda led by close to ten seconds until Rutter brilliantly squeezed the remaining energy left in his battery pack to snatch the win.

Now The Sad News. Veteran Michael Czysz is undergoing chemotherapy in a battle with cancer. This will be the first year he didn’t make it to the Island on his bike. Our thoughts are with him as we await more epic battles on racetracks.

What Makes A Good Race. We’ve seen time and time again that the biggest, baddest machines don’t always win. In this case, McGuinness’ Mugen was the favorite with no less than an extra three miles an hour top speed over the MotoCzysz but 37 miles later, the team effort and judicial use of energy gave the MotoCzysz the added boost to regain the lost 9.8 seconds with an extra 1.6 on the Honda. You rarely see this with modern gasoline races any longer.

Faster Every Year. Speed is getting better also. While electric motorcycles are still far away from their gasoline counterparts, every year sees them gain a little more top velocity, a tribute to engineering and team work. See the pictures in the gallery to get an idea of the improvements.

All in all, this win at the Isle of Man for the TT Zero race is a tribute to electric motorcycle racing and the MotoCzysz team, as we sent a Godspeed recovery to Michael Czysz.