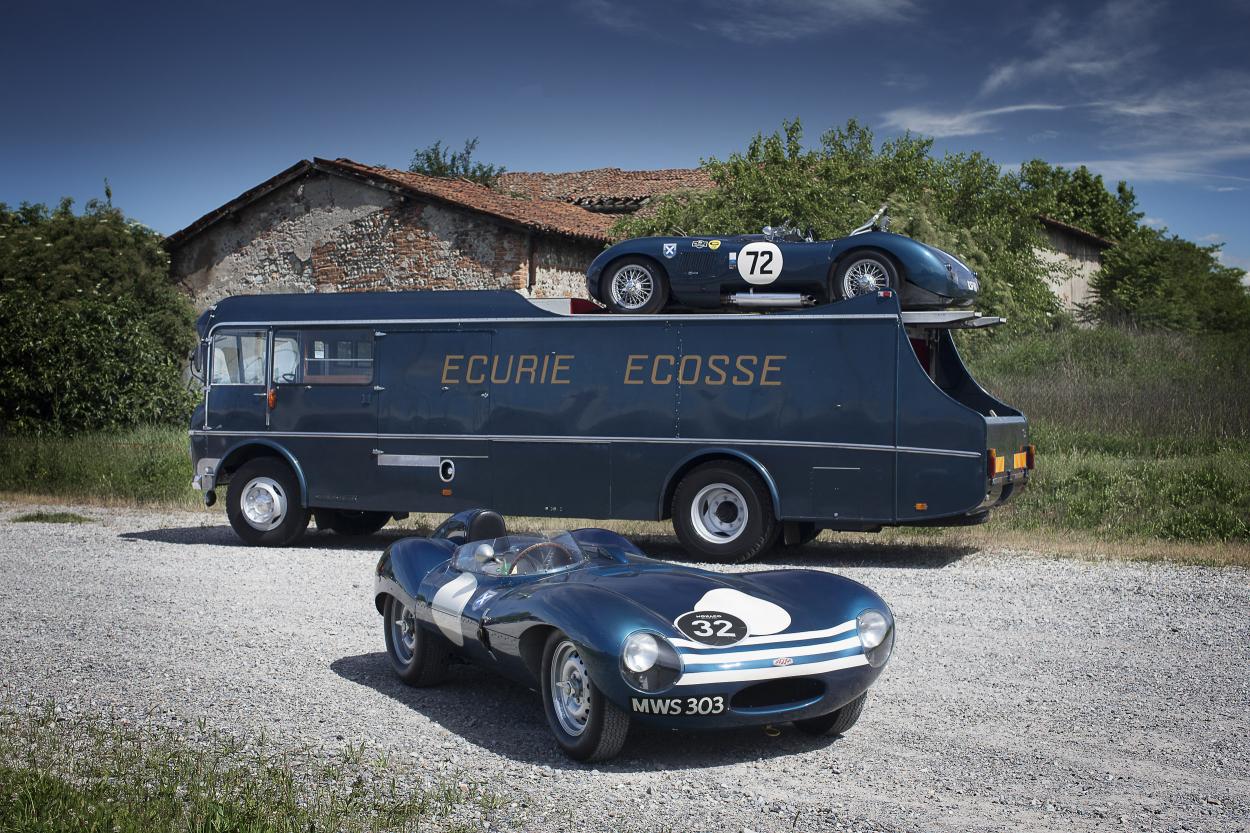 This year’s Mille Miglia is packed full of famous cars and equally famous drivers – but when it comes to prodigious competition histories paired with A-list names, the combination of Jaguar Heritage Racing’s 1951 Ecurie Ecosse XK 120 roadster with Jay Leno and Ian Callum is hard to beat.

US TV chat show host, Jaguar collector and classic car enthusiast, Jay Leno, and Jaguar Design Director, Ian Callum, are legends of the automotive industry – and at the Mille Miglia this year their presence is complemented by that of the 1951 XK 120 Ecurie Ecosse roadster. One of the most valuable and important XK 120s in the world, ‘LXO 126’ is the only surviving example of three original cars built to launch the Scottish racing team in 1952. A race winner in its period, it is most famously associated with raffish Anglo-Scottish aristocrat Sir James Scott-Douglas.

Scott-Douglas competed in a number of endurance races across Europe with Ecurie Ecosse and even went on to keep ‘LXO 126’ as a road car in 1953. In the same year, the car returned to the race track at the infamous Nurburgring; Ecurie Ecosse mechanics hastily converting it back into a competition car when one of the team’s C-type’s met with an accident.

Since then the car has been the subject of a meticulous restoration. Resplendent in the classic Flag Metallic Blue of the Ecurie Ecosse racing team, it was recently sold by Bonhams Auctions for £707,100 at the end of 2013 and has been loaned to Jaguar Heritage Racing for the Mille Miglia.

It won’t be the only Ecurie Ecosse car in Italy for this event – the Ecurie Ecosse C-type and D-type the original Ecurie Ecosse racing transporter will also be present at the start of the Mille Miglia in Brescia.

Ian Callum, Jaguar Design Director, said: “As a Scotsman, Ecurie Ecosse is incredibly close to my heart – so the chance to drive this incredible XK 120 through Italy is a once in a lifetime opportunity. Factor in a co-driver who’s almost as much of a Jaguar man as me – and there’s no doubt I’m going to love every minute!”

Jay Leno commented: “I’m fortunate to have an XK 120 in my garage – not to mention a few other incredible cars from Coventry – but this Ecurie Ecosse XK 120 is one of the most beautiful Jaguars ever built. I absolutely adore it. It’s a real honour to be asked to drive it on the Mille Miglia and to be able to revel in its history with someone like Ian is a true privilege.”

Jaguar Heritage Racing will be tackling the legendary Mille Miglia classic car endurance event from 15-18 May with a line-up of top-name drivers, which will be traversed over 1,000 gruelling miles from Brescia-Rome-Brescia in ten of the most revered and sought-after historic Jaguar cars ever produced.

Live updates will be available from 15-18 May through Jaguar official social media channels (www.facebook.com/Jaguar and www.twitter.com/jaguar), as well as Twitter profiles of drivers using hashtag: #JaguarMille