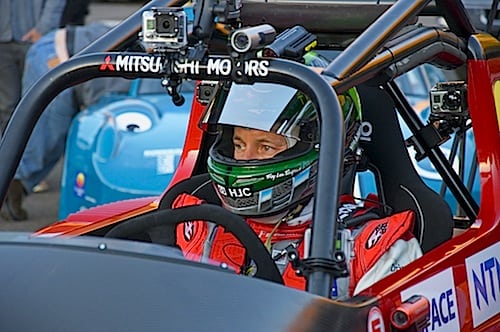 Electric Vehicles Point to the Future at Last Pikes Peak

The 2014 Toyota Venza is a family wagon in crossover guise that loves going there and taking the whole fam damily with. Though not much has changed since 2013, not much needed changing anyway. A couple of decades or so ago, the crossover appeared on the scene. Most were big, boxy, generally unwieldy machines but as the only alternative to a minivan, they were popular anyway. One of the few exceptions was the Venza’s chief rival from Subaru, which ignored the box-on-wheel trend and went with the station wagon format. It proved successful and Toyota noticed.

Although the station wagon is probably the only vehicle that is less cool than a minivan, it’s a design format that is roomy, family-friendly, versatile, and (above all) smaller than a van. For many people, this is the way to go because it generally means more fuel efficiency, less wasted space, and, in the case of the crossover platform, more capability.

Enter the Toyota Venza, which has taken the best of the larger Highlander and the smaller hatchbacks and melded them into a midsize station wagon crossover that, in many ways, rivals those that Subaru made its name on in the U.S.

Exterior Styling of the 2014 Venza

There are three trim levels for the Venza: LE, XLE and Limited. All have the same exterior styling, of course, with the main differences between each being the price tag and the amenities.

The 2014 Toyota Venza is a station wagon (five door hatchback) in style. It has a short hood, long windshield, and lightly tapering roofline that ends in a rounded hatchback rear end. The big 19-inch wheels are standard on all trim levels, as are fog lamps and privacy glass.

The Venza has a contemporary look with a luxurious appeal.

Inside the 2014 Toyota Venza

The interior design of the Venza is all about family comfort. It’s practical, yet attractive and its centerpiece is a console that features a high-mounted shifter to free up space between the front seats. A large console bin, big (and plentiful) cup holders, and a perfect smart phone cubby are all there.

You can see the full suite of interior thoughtfulness that adorns the Venza in this interior review video:

The 2014 Venza has two engine options: a four-cylinder or a V6. We drove it with the V6 (standard in the Limited package), which is highly recommended. Either engine can come with front-wheel or all-wheel drive and a six-speed automatic transmission is standard.

The 3.5-liter V6 engine is one of Toyota’s workhorses, appearing in several vehicles, and produces 268 horses and 246 lb-ft of torque. It provides fast acceleration (roughly 7 seconds to 60 mph) and is also offered in both FWD and AWD packages. The four-cylinder saves only money as well, since the six has EPA estimates of 22 mpg combined in FWD and 21 combined for AWD (19/26, 18/25 respectively). The V6 also adds towing as an option, with the optional towing package adding 3,500 pounds of towing capacity. On the road, the Venza is comfortable and utilitarian without being boring. The smooth V6 provides good acceleration, great fuel economy considering the size of the 2014 Venza, and a feeling of safety.

The Venza is not sporty, despite the fine acceleration, with dampened steering and little road feedback through the pedals and wheels. Given the market it’s aiming for, however, the Toyota Venza doesn’t need those things to be a great choice.

Above all, the Venza is comfortable and family-friendly. Every interior point is aimed towards making the ride a good one.

Most other crossovers in the segment can be considered competitors to the Venza. The Kia Sorento, Nissan Murano, and similar vehicles are competition, but only peripherally.  The Toyota Venza’s chief rival is the Subaru Outback, which is a formidable foe. In direct comparison, the Venza is far more family-friendly and daily useful than is the Outback, but the Outback has more style and capability for those that like to “get out there.” Where the Outback focuses on getting the job done and then going out into the great unknown for fun, the Venza focuses on making the job easier and having the occasional outing as a result.

Very family-friendly and a good, smaller companion to the excellent Highlander.

Not as fun to drive as some of the competition.

Wagon styling may put some buyers off.

All together, the 2014 Toyota Venza is a great family vehicle. It’s large enough to take most everyone with you, but not so large that you require truck stop parking to accommodate its bulk. A very well-done station wagon crossover.

Test Period Length and Limitations
The Venza was a manufacturer’s press loan for about a week. During that time, it was driven in town, city, highway and freeway traffic. Occupants ranged from a driver alone to up to four adults or two adults and two children in safety seats.