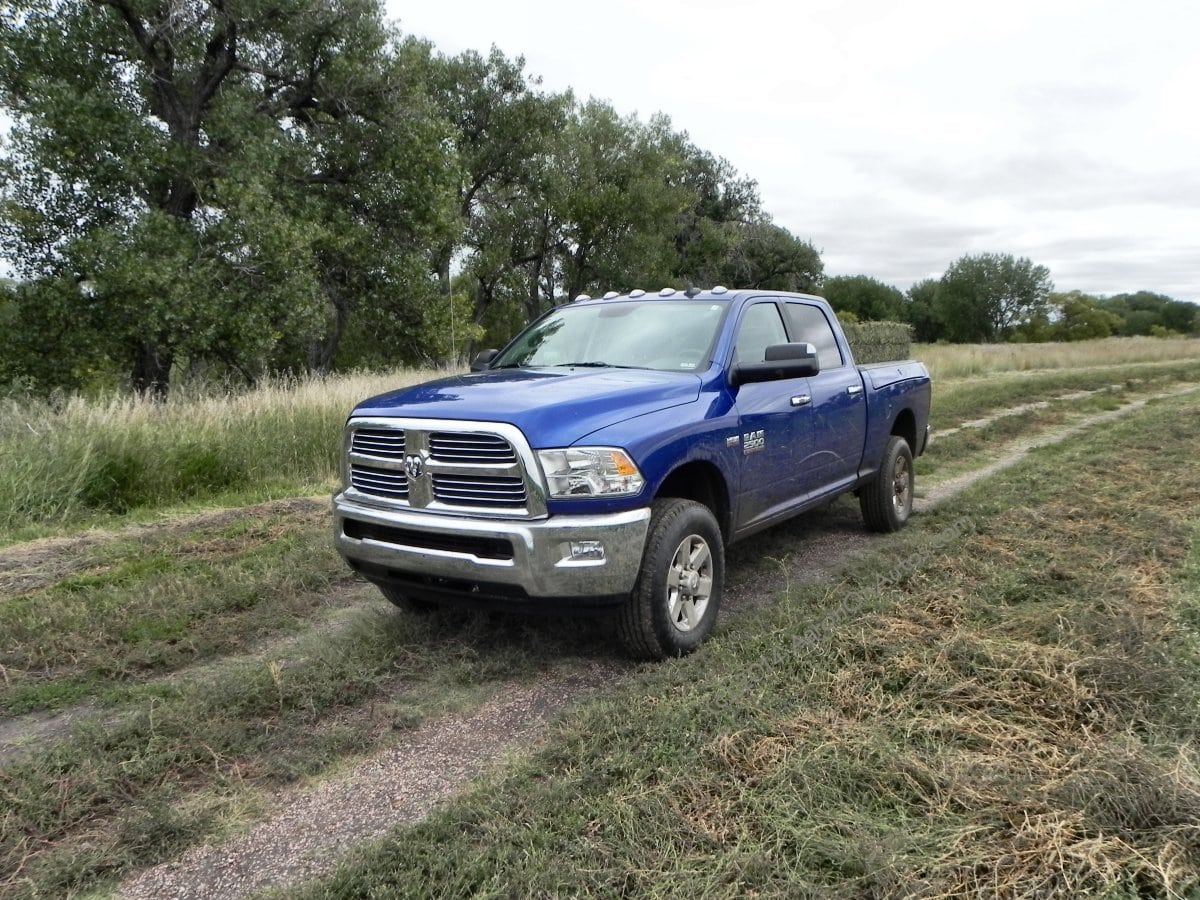 Everything about the 2014 Ram 2500 in the Big Horn package is aimed at getting the job done. It’s a tough, powerful, comfortable work-a-day pickup that’s capable of doing just about any job you ask of it. The 2014 Ram 2500 Big Horn is a three-quarter ton pickup that doesn’t shy away from getting down and dirty. This is the first-generation Ram 3/4 ton to offer coil springs on the rear axle and this greatly improves the highway ride of this big pickup. So much so that it’s likely the best-riding work truck on the market. The added comfort, however, does not detract from the truck’s capability.

Ram pioneered what was to become known as the “big rig look” in pickup trucks. It’s common today, but in the 1990s when Dodge redesigned the Ram line of pickups, changing their designation from a Ford-like “D###” rating to a now-standard “1500, 2500, etc.” rating system, they set several benchmarks. The new Ram trucks were beefier, more powerful-looking, and had big, shiny, chrome-plated grilles. Tall wheel wells and heavy-duty wheels accentuated this “trucker” look.

The new look proved an almost immediate success as Dodge truck sales began to climb and market share began to grow. Ford and General Motors were quick to follow, of course, and forces outside of the Dodge truck division pulled the Ram back down from its sales heights of the mid- and late-1990s.

Still, the die was cast and the look and style we associate with Ram Trucks today was created and set. We drove the 2014 Ram 2500 with its 6.4-liter V8 engine option, which runs through a six-speed automatic transmission. This is a new powerplant for the 2500, though the base 5.7L V8 is still available, as is the 6.7L diesel from Cummins.

This engine has a powerful amount of output with tow and haul ratings well above anything we could muster during our week with the truck. We reached roughly half its capacity with the bed full of hay bales and the Ram 2500 didn’t seem to even notice that they were there.

Fuel economy is not rated by the EPA, since this is a heavy-duty vehicle, but we saw about 19-20 mpg on the highway running empty. That’s as good or better than many half-ton trucks we’ve driven. A testament to the new Ram design and engineering.

Compared to other trucks on the market, the Ram is somewhere in the middle of the road when it comes to driver ergonomics and comfort. The Big Horn package, being the most popular in the Ram series, adds a fair amount of everyday usability to the truck’s interior. This package proves cost-effective for many workday drivers who spend a lot of time in their pickups, adding seating adjustments, more lighting, an upgraded stereo, and so forth.

Our test model did not include running boards or mounting stirrups to aid getting in and out of the big and tall Ram 2500, however, and we feel that this is a must for most buyers. The grab handles and my tall stature made it easy for me to get in and out without trouble, but shorter people had a tougher time of it. I joked to my five-foot zero wife that I’d have to install a rope ladder and some repelling gear for her to get in and out with.

Once on the road, though, the Ram 2500 really shines. Whether toting around wife and kids, friends, co-workers, or just driving solo, the 2014 Ram 2500 Big Horn is a smooth, comfortable ride with remarkable fuel economy on the highway. As far as pickup trucks go, it’s easy to drive, but not as comfortable as some others we’ve been in (see competition below). Our truck also included the optional Ram Box, which encloses the wheel wells to create storage boxes on either side of the bed. These now lock with the doors, providing extra security, and are convenient for a lot of things like tools, fishing rods, extra coats, muddy boots, and so forth. The signature Ram under-floor storage in the back, at the foot of the rear seats, are also nice, as is the optional (but well worth it) back seat bench option. This allows you to fold up the back seats and lay out a built-in flat table or bench, perfect for use as a work surface, a place to lay injured animals, and a lot of other things when working from your truck. The table is about waist high for most men, making it ideal for a lot of purposes.

Our truck also had the optional front seat bench, which lets you lift up the center armrest, creating a bench to seat three up front, giving the Crew Cab seating for six. Cowboys refer to this center of the bench as the “honey seat” as that’s where you girl sits so you can cuddle as you drive. Don’t knock it ’til you’ve tried it.

All in all, the 2014 Ram 2500 Big Horn with these additions is a great mix of daily use and working truck. During the week we had the Ram 2500, we went to a nearby farm in Nebraska and did some work with it for a day. We loaded hay, drove it through corn fields and over hills across property that was muddy from yesterday’s rain. While we had four-wheel drive if we needed it, the weight in the bed meant that the truck had good traction throughout, so it wasn’t used that day.

After traversing several acres of property, dropping hay as we went and checking fence lines out of habit, myself and the farm hand friend who’d invited me out, returned to the homestead. There, a pig slaughtered the night before had been roasting in the smoker since then. Life is good in the country.

On subsequent drives, I tried the Ram 2500 in muddy fields, up rocky inclines, and in other situations where 4×4 is mandatory. Whatever I threw at it, it was able to handle it. The high clearance and powerful engine make for a great combination.

Capability Run-down for the Ram 2500

The other two in the Big Three are the main competition for the 2014 Ram 2500: the Ford F-250 and the Chevrolet/GMC 2500. The F-250 is just about as capable and good-looking, but lacks some of the amenities that the Ram offers in this package at this price point. The Ford is also showing its age in 2014 and the much-needed 2015 update will be welcome.

The General Motors offerings from Chevrolet and GMC are good competition for the Ram. They’re a little more capable on some fronts (namely cargo) and nicely outfitted inside at a similar price point. They are not as comfortable on the highway, however; especially when running without a load.

Very capable and at a good price point for the segment, as outfitted.

Fuel efficient and comfortable compared to the competition.

Not as convenient or powerful as some competition packages and options.

Our overall impression of the 2014 Ram 2500 Big Horn were that it is a capable, honest pickup truck that is able to do any job you ask of it without complaint. It’s rugged, efficient, and rather nice to look at too.

Test Period Length and Limitations
The 2014 Ram 2500 was a manufacturer’s press loan for about a week. During that time, a total of 287 miles were put on the truck in a mixture of highway, freeway, offroad, and unpaved road use.