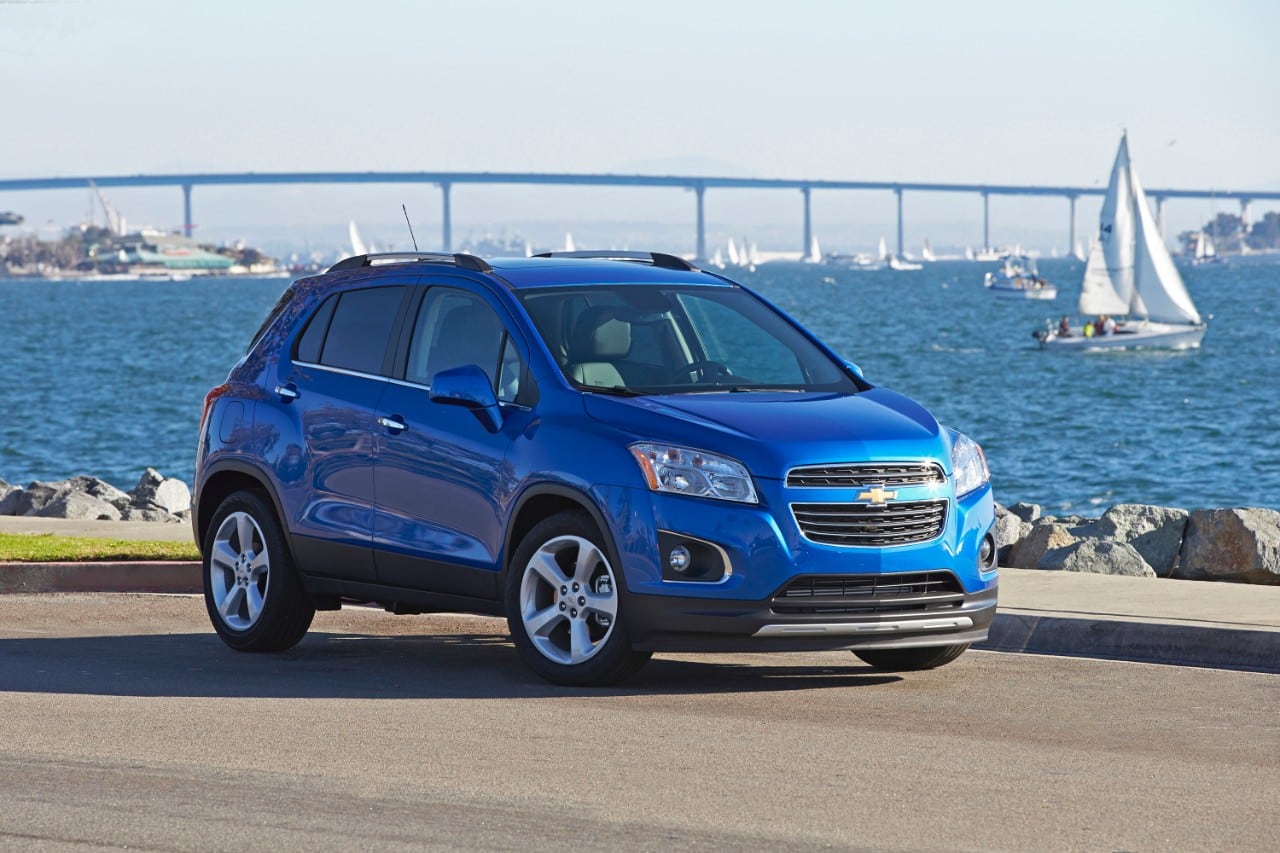 There’s smart and then there’s street smart. That’s a popular saying. It somewhat applies to my tester this week. The 2015 Chevy Trax can be considered street savvy as it’s a vehicle aimed at urban dwellers and is ready and capable of handling itself in an urban environment.

This new offering from General Motors fits into a growing niche of vehicles aimed at those who want an SUV-type vehicle, but one that is small like a car and extremely maneuverable. That is the Chevy Trax’s sweet spot! It’s small stature, all-wheel drive and tiny price give it broad appeal to go along with its street smarts. The Trax shares a platform with the miniature Chevy Sonic, but is bigger than the Sonic, but smaller dimensionally than the Chevy Cruze. But the Trax looks bigger than even a Cruze. That’s mostly due to the higher ground clearance and stance of the Trax. Plus due to its design styling, the Trax looks even taller than it actually it is.

The Trax has a rounded, elevated appearance. The highest point of the Trax is in between the A and B pillars, which is right where the front passengers’ heads go. So while this may give the Trax a more rounded, different look, it’s actually quite functional, aiding in interior cabin space. That bubbly design feature continues along the roofline and not losing it’s height until the C-pillar, which means even the rear passengers have good head room.

The overall looks of the Trax are different from other Chevy vehicles. While Chevy sometimes pays attention to styling touches, the overall aesthetics of the Trax are meant to be more functional than stylish. It certainly is one of those vehicles that some will love or hate, like the Fiat 500, Kia Soul or Nissan Cube.

The Trax has a 1.4-liter, turbocharged engine. Despite the turbo, the Trax feels and drives under powered. It has 138 horsepower and 148 lb./ft. of torque. A six-speed automatic transmission assists the engine, neither of which are very inspiring. The Trax is pokey. It’s slow off the line and takes a while to get to highway speeds. But, consider the demographic of this vehicle is urban dwellers, and you realize it’s the right engine and right output for an urban environment. At the lower RPMs, both the engine and transmission shine. Inside, you have to appreciate the Trax for what it is, and not for what it isn’t. Because it is not lavish. There are few soft materials found anywhere. It’s not the cheap plastic that GM used to put in economy vehicles, but it’s not soft or luxurious either. As such, road noise is an issue. But, looking past the sparse interior, you appreciate a vehicle that provides ample space and comfort for all passengers.

Front headroom is 39.6 inches and rear headroom is 38.8 inches, all thanks to the unique exterior styling I mentioned.

The rear seat can accommodate two average-sized adults or three kids. Rear leg room is 35.8 inches, but it’s more the shoulder room that would keep you from fitting three adults comfortably in the backseat of the Trax. Behind the second row there’s 18.7 cubic feet of space. This is better than similarly sized sedans (better than Cruze). Fold the second row flat and you have access to 48.4 cubic feet of cargo space. For a smallish vehicle, this is an extraordinary amount of space and shows the versatility of the Trax for city slickers. A 7-inch touchscreen helps power the infotainment system which uses GM’s MyLink interface. It’s an intuitive system and one of my favorites. There is easy integration with smart phones and devices and numerous apps that enhance your time in the vehicle. There is no built-in navigation system, rather you have access to downloading BringGo, an app specifically designed for GM vehicles. This is a good navigation app that does more than some factory-installed nav systems (many that cost a couple grand).

This is the way more carmakers are going with navigation systems, and I appreciate Chevy embracing the technology at hand.

Fuel economy is outstanding for the Trax. It has an EPA rating of 26 mpg/city and 34 mpg/highway. In a week’s worth of mostly suburban driving I averaged 30.1 mpg. Any time I can get over 30 mpg, that’s a good thing.

The Chevy Trax is not without flaws. And perhaps me living out here in the burbs, its true value is lost on me. With wide open spaces, big parking lots, the value of the Trax is in its stature and ability to get into tight parking spaces and perform well on city roads. The Trax has a lot of urban credibility, while I have none.