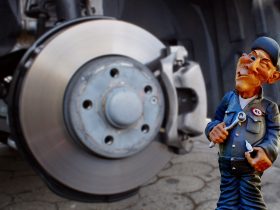 5 Signs of an Imminent Brake Failure

Cars aren’t just a means to an end, a way to get from A to B; they’re beautiful, life enhancing creations that have come a long way since they first appeared on our roads little more than a century ago. The appearance of cars has changed radically, but what’s inside the car has changed even more. Technology is changing how our cars operate, and how we drive them, at an exponential rate, and that’s making them more fun and easier to drive than ever before. Here are three automotive advances that have made a particularly big impact in recent years.

Reverse parking and parallel parking are maneuvers that every driver has to execute from time to time, but if we’re trying to get into a tight spot it can leave us in a cold sweat. Thankfully, technology is making this anxiety a thing of the past, as increasing numbers of drivers are already benefiting from parking sensors. Modern sensors can detect other vehicles and hazards around you, and alert you if a problem is nearing, and many sensors are also linked to a visual display which can show you the rear of the car and the area around it, making what could have been difficult parking easy. This is becoming standard in all cars, and self parking cars are also becoming more popular and more affordable.

You may not be aware what telematics means, but you’re sure to have heard what it does, especially if you’re a young driver or looking to obtain insurance for a young driver in your family. Telematic boxes are also known as black boxes, and they record an in depth series of data relating to how a car is being driven, from speed to distance covered on each journey. The results of that data can then be fed back to insurance companies, meaning that safer drivers can be offered lower insurance premiums. Getting affordable car insurance can make a big difference to your overall running costs, which is why telematics and car insurance comparison specialists such as Insuranks are becoming increasingly popular. By comparing car insurance quotes, and understanding how they work, drivers of all ages and levels of experience can make substantial savings.

Self parking cars are already a reality, and it may be only a matter of time until seeing self driving cars on the road becomes similarly common. The UK government recently announced that completely autonomous vehicles could be in action on their roads by 2021, with trials involving cars with no steering wheels anticipated by the end of 2019, and tests in American states already underway. This will be possibly the biggest leap forward yet in automotive design, and whilst it may remove what some see as the fun of driving, it will certainly make using a car easier.

Telematic boxes, parking sensors and self driving cars are just some of the major advances we’ve seen in the motor industry in recent years. Cars are now easier to park and drive, and cheaper to insure too. Future innovations such as these will make cars cheaper to run and safer for other road users and pedestrians, which is great news for car owners and everyone else.