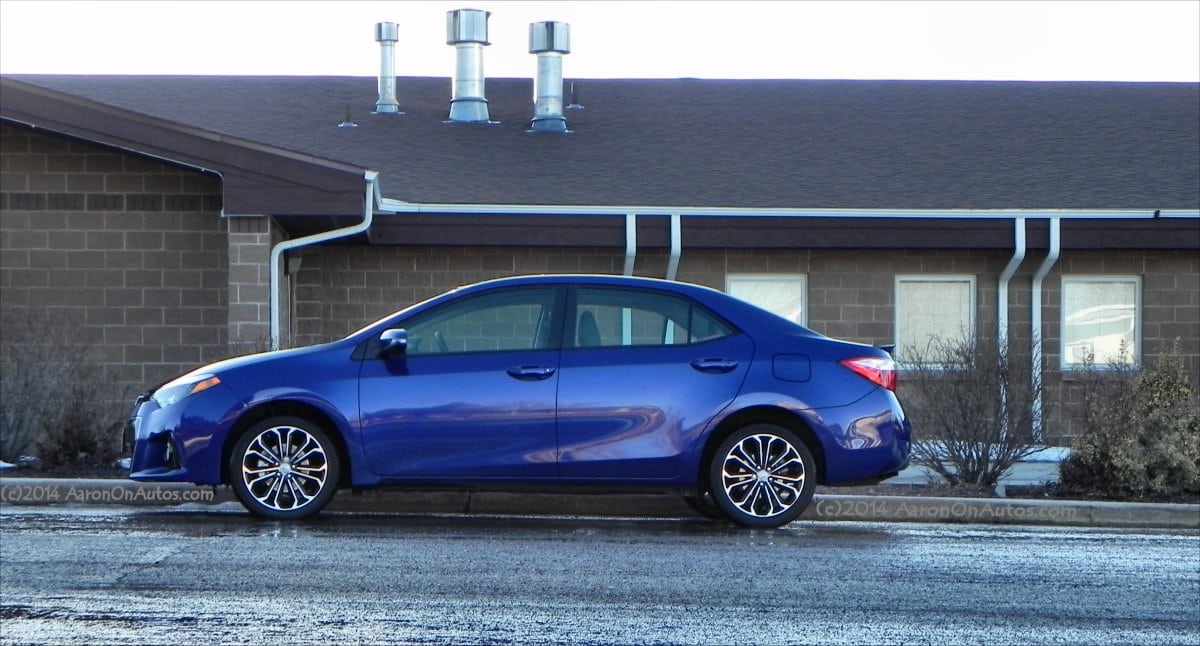 The 2014 Toyota Corolla is bigger and roomier with a far edgier look than it’s sported in the past. Although saddled with a clunky CVT, it achieves better fuel economy despite its size increase, making for a lot of changes since the first time I ever drove a Corolla, way back in the 1980s. My first car was a 1984 Toyota Corolla LE. That was the golden age of Toyota when the company built a solid reputation for itself for both reliability and value for the dollar. That car had 289,000 miles on it when it finally died and its death was largely due to a young man’s negligence rather than any unexpected mechanical failure. The engine and five-speed standard transmission easily had another 50,000 or more miles left in them.

Fast-forward to today and that boxy, 1-2-3 design seems woefully outdated and bereft of any sophistication or style. Not only has the design for the 2014 Toyota Corolla changed dramatically over time, but so has the car’s size and appeal. This car is often on the best-seller list for good reason and though this generation may have a tougher go of it thanks to some powerful competition, it’s still a contender for several reasons. Exterior Style Cues for the 2014 Corolla

The 2014 Toyota Corolla has a very different profile from its more sedate predecessors. The blasé contours and no-frills front clip are gone and have been replaced with a more aggressive front grille, stronger curves, tighter headlights, and nicer wheel choices.

The general shape of the car has not changed too much, with the aerodynamics remaining a top priority, but the roofline is more curved thanks to a changed pillar arrangement (thinner in front, less Euro-curve in the rear) and the deck lid is shorter for a more fast-back appeal at the rear.

The Premium package adds a rear spoiler and the new curves for the rear lamps are a nice touch as well. The S and other packages offer some fetching wheel choices, including the eye-grabbing alloys shown here on our test model.

Overall, the exterior styling is a lot more aggressive and loses most of the previous “boring sedan” mark that had plagued this car for so long.

Inside the 2014 Toyota Corolla S Premium

The interior is still the comfortable, well-considered Corolla many have known and loved. It’s made for the everyday driver and has a lot of thoughtful ergonomic touches that keep it a top choice for those who use their car daily.

Seating is comfortable with a lot of new room added, especially in the back seats, thanks to the slightly larger body size in this new-generation Corolla. Packages like our S Premium add some better materials to the seats and more adjustment for the driver.

Trunk space is a priority in this segment and Toyota didn’t scrimp, with the 2014 Corolla’s rear boot being spacious. Not much has changed in there and it’s very competitive for the segment in terms of size and opening dimensions.

The rear seats fold down, of course, and the leg room throughout the cabin has improved in a big way. The doors are slightly larger too, making entry and egress easier and for parents, the installation of child safety seats is very quick and easy whether you have Latch or tethers.

Under the New Corolla’s Hood The 2014 Toyota Corolla has a familiar 1.8-liter four-cylinder dual overhead camshaft (DOHC) engine under its hood sporting sixteen valves and variable valve timing (VVT-i). This produces 132 horsepower and 128 lb-ft of torque which runs through a continuously variable transmission (CVT). The only exception to this engine configuration is in the LE Eco model, which raises horses and lowers torque.

The CVT is what matters in this setup and is what’s responsible for most of the new Corolla’s fuel efficiency gains. At 37 mpg on the highway and 29 mpg in the city, the 2014 Corolla is no slouch, but this added efficiency comes at the cost of drivability.

In short, the CVT is clunky, to say the least. Even those who aren’t “car nuts” notice this. It makes disconcerting whining sounds, has an erratic “shifting” jerk that is supposed to simulate a “normal” automatic transmission, and gives the Corolla a sluggish feeling – even though the car is expected to be sluggish. It robs the powertrain of any confidence it might have had.

Others have gone the way of the CVT and had stellar results from it, notably Nissan and Subaru. For whatever reason, Toyota’s engineers deemed it important to mimic the shifting in a standard transmission and the result is.. well, just sad.

For the driver and passengers, outside of the transmission (which you do eventually get used to, though it always lingers nearby), the ride and drive in the 2014 Toyota Corolla are about what you would expect of the car. The Corolla has never been the sportiest, peppiest, most maneuverable, or most fun car in the segment. It has, however, always been comfortable, confident, and good at its job.

That doesn’t change for the 2014 model year, despite the redesign. For the market, though, that’s one of the key factors that’s kept the Corolla in the top sales list. Comfortable and simple mean reliable to most people and that’s what the Toyota Corolla is best known for.

Highway noise is loud, but not outside of the expectations of the compact car segment. With the work Toyota has done in other cars, however, it’s surprising they didn’t do more dampening here. Still, it’s tolerable and acceptable.

The 2014 Corolla handles well in the city, is confident on the highway, and has good visibility making it easy to get in and out of parking stalls. The mirrors are a good size and the controls are straight-forward and no-nonesense. Key and worthy competition for the 2014 Toyota Corolla include the well-done 2014 Kia Forte, the stylish little 2014 Ford Focus, and mainstay competition like the Honda Civic and Chevrolet Cruze.

The Forte is a prettier car, but has a higher price point when it becomes competitive with the Corolla as we drove it. The Focus is also prettier and has sport packages that please many enthusiasts. The Civic has always been a close contender and the Cruze offers a great diesel variant. So competition in the Corolla’s market is very stiff.

The new design is very well done. It may not appeal to everyone, but it’s definitely far edgier and more dynamic than past Corolla aesthetics have been.

Bigger means roomier which means more comfortable. The 2014 Corolla is far easier to get in and out of, easier to install child safety seats in, etc.

Horrible CVT. There’s no other way to say it. It’s just horrid.

Noisy interior on the highway, which is par for the segment, but with other Toyotas in the same price point improving this lately, it seems an oversight to have skipped the Corolla.

The Toyota Corolla has always been a standard go-to car in the compact segment and will remain so for some time. This new redesign doesn’t change the qualities which made it a best-seller and adds a little style to the exterior to go with it. The CVT is really the only thing holding this car back, in our minds, but doesn’t give us any reason to believe the car will be less reliable mechanically. Overall, a good choice for buyers in the compact sedan segment, as the Corolla always has been.

Test Period Length and Limitations
We drove the 2014 Toyota Corolla for about a week as a manufacturer’s press loan. It was driven in fair weather and bad, though during the week the worst of winter avoided us. A total of 292 miles were put on the car, including city, highway, and town driving. The mix was roughly 70% highway.